The uncertain tale of our closest exoplanet neighbor — is it there or isn’t it? — may end on a cliffhanger. 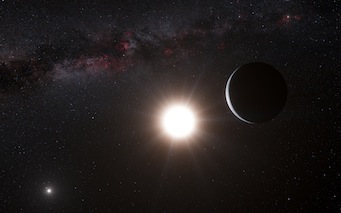 This artist's impression of the Alpha Centauri system shows Alpha Centauri B at center, with its planet candidate in crescent phase. The companion star Alpha Centauri A is at left, while the faint dot in the upper right is our Sun.

Last October astronomers announced big news: the discovery of a rocky, scorching hot, Earth-mass planet circling our closest stellar neighbor, the orange dwarf star Alpha Centauri B just 4.3 light-years away. Exoplanet astronomer Debra Fischer (Yale) told the New York Times that the planet next door was the “story of the decade.” Almost lost in the excitement was the caveat that the planet’s detection was still iffy and required heroic efforts to extract any sign of it from the background noise of the star’s radial-velocity measurements.

Now the plot has become more muddled. A new analysis of the data by an independent researcher has failed to confirm the planet’s existence.

The new study, by Artie Hatzes (Thuringian State Observatory, Germany), is not a death sentence for Alpha Cen Bb, as it’s named. But both sides say it illustrates the need for more data collection and confirmation before it is accorded full planethood — or, Hatzes adds, feted by the media. “Although big discoveries are exciting, they should be treated with caution,” he says.

A Bad Case of the Jitters

The original detection of Alpha Cen Bb was made with the HARPS spectrograph on the 3.6-meter ESO Telescope at La Silla Observatory in Chile. HARPS is perhaps the world’s best planet-hunting spectrograph. It can measure Doppler shifts in a star’s light as small as 1 part in 300 million as the star wobbles toward and away from us under the gravitational pull of an unseen planet. That corresponds to the star moving at just 1 meter per second: slow walking speed.

However, there are many other ways in which a star may show such slight redshifts and blueshifts. For example, the light emitted by a rotating star is always a blend of blue- and redshifted light because half of the star’s surface is rotating towards us and half is rotating away — at typical speeds of thousands of meters per second. If a dark starspot rotates into view, the brightness of the blue half of the star falls a tiny bit, throwing off the redshift-blueshift balance between the two sides. As the spot rotates out of view, the redshifted side of the star becomes a little dimmer. This process can mimic a gravitational wobble, creating the false impression of a planet. Flows of surface gas, and upheavals and fallbacks of surface granulations, create further noise in the radial-velocity signal, which astronomers call “jitter.”

Alpha Cen Bb’s original detection, made by a European team led by Xavier Dumusque (formerly at the University of Geneva; now at the Harvard-Smithsonian Center for Astrophysics), represented a careful effort at stripping away all possible sources of jitter and averaging a large number of measurements, pushing the limits of modern technology (and statistics) to reveal a gentle, periodic stellar sway of a mere 0.51 meter per second, hardly faster than an infant’s crawl. It was “a paper with a lot of firsts in the way that they tried to deal with the stellar signal,” says Suzanne Aigrain (University of Oxford), an astronomer not connected to either study.

But even as scientists welcomed the exciting find, many were quick to acknowledge that it needed more confirmation. To aid this, the authors made their data publicly available for others to reanalyze.

“How Science Is Done”

So Hatzes did — driven by a “gut feeling of skepticism.” On his first try, using jitter-removal methods on the full dataset similar to the original team’s, he reproduced their result, finding the same signal. But on his second try he used a more targeted method, breaking the data up and removing the jitter from one chunk at a time. When he reassembled the data, he couldn’t find the planet at all.

Suspecting that his method might simply not be powerful enough, Hatzes put it to the test by creating simulated data sets, inserting artificial planetary signals into the noise of the actual data. What he found was that his new method worked quite well. If Alpha Cen Bb were really there, he should have found it at a 99% confidence level.

Hatzes acknowledges that Alpha Cen Bb’s high public profile raises the stakes. “I am bracing for some intense criticism,” he admitted. But thus far, the news has been met not with controversy but a quiet confidence that the scientific process is proceeding. Xavier Dumusque, the lead author of the original study, stood by his team’s work, but writes that Hatzes’ analysis is “very healthy for science” and that “calling into question a detection is always something fruitful.” Aigrain called it “a really nice example of how science is done.”

So what will resolve the matter? On this, everyone agrees: “The key is to have a hell of a lot of data,” Aigrain says. Hatzes writes, “If more measurements confirm this planet I would be the first to say ‘Bravo!’”

But the current window for collecting it is closing. The Alpha Centauri system is a binary, and the two stars’ orbital motions are bringing them into closer alignment from Earth’s viewpoint. As soon as the end of 2013 they will be too close for measurements of Alpha Centauri B’s radial velocity without contamination by light from brighter Alpha Centauri A, and astronomers will have to wait several years before they separate.

When I reached Dumusque, he returned my email late at night. The reason: he was in Chile at La Silla Observatory on a week-long observing run, collecting more data with HARPS on Alpha Centauri B.

I heard about the discovery of a rocky planet in the Alpha Centauri system which was said to have been confirmed by the Kepler space craft. I have to assume the Kepler discover is orbiting Alpha Centauri A and not B. Also, why is there no further mention of the possible planet orbiting the orange dwarf Proxima Centauri? I have a book that shows the wobble of Proxima as it moves through space which indicates a possible planetary body.

John, there certainly has been a lot reported and said about a planet or planets in the Alpha Centauri system. Such reports capture our attention since this is our closest neighboring system. Reports can be hyped and are often misquoted, and so what we hear people say is often less than accurate. Then there are our own less than perfect memories, and even those with bad motives who may try to deliberately deceive. Even scientists who work long and hard to compile evidence that “proves” something may overstate the strength of the evidence, which other scientists may refute. In this Alpha Cen Bb case the first group only claimed that there MIGHT BE a rocky planet there, and the second group is saying that there MIGHT NOT BE a planet there. As for the Kepler mission, it could not have confirmed any planet in the Alpha Cen system at all because it was only looking at stars in a very different part of the sky. Yes, there still could be one or more planets in this system, but at this point it remains only a hoped for possibility.