Although just spotted a few days ago, Comet ISON (C/2012 S1) has the potential to become a very bright object that will be well placed for viewing in late 2013.

Faint, distant comets get discovered all the time, usually by robotic telescopes that sweep up huge swaths of sky every clear night. Most come and go quietly. But a new find made on September 21st by a pair of amateur sky sleuths has the astronomy world atwitter (in this word's traditional and modern connotations) with the prospect that it could become very bright late next year. 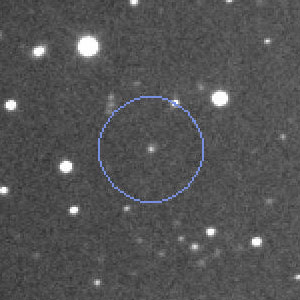 The discovery image of Comet ISON (C/2012 S1), as recorded by Vitali Nevski and Artyom Novichonok on September 24th. At the time the comet was 19th magnitude — roughly 100,000 times fainter than the limit of unaided vision.

It was first spotted as a faint, 18.8-magnitude object in images taken by Vitali Nevski (in Belarus) and Artyom Novichonok (in Russia) using a 16-inch (0.4-m) reflector that's part of the worldwide International Scientific Optical Network (ISON). "We could not be certain that it was a comet," Novichonok explains, "because the scale of our images is quite small [2 arcseconds per pixel], and the object was very compact."

The next night they confirmed its cometary nature using the larger reflector at Majdanak Observatory in Uzbekistan, but by then other astronomers had done likewise. According to naming conventions established by the International Astronomical Union, that one day of uncertainty led to the comet being generically named "ISON" instead of "Nevski-Novichonok". Its formal designation is C/2012 S1.

Naming uncertainties aside, we already know a lot about this object, thanks to two sets of prediscovery images dating to last December and January. The comet is inbound from the Oort Cloud and will pass very close to the Sun — just 725,000 miles (1.2 million km) from its white-hot photosphere — on November 28, 2013. Before then and thereafter (if it survives perihelion), Comet ISON could put on a spectacular show. 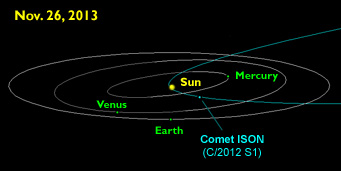 As plotted by the Jet Propulsion Laboratory's "Horizons" system, Comet ISON (C/2012 S1) will pass very close to the Sun — but not crash into it — in late November 2013. At that time it might be at least magnitude –10 — bright enough to be spotted despite very strong solar glare.

In fact, the geometry could make C/2012 S1 a "dream comet," as one eager skywatcher has commented, because it will swing just 40 million miles (0.4 astronomical unit) from Earth a few weeks after perihelion, when it will be high in moonless, northern skies after sunset. Initial predictions by the IAU's Minor Planet Center suggest that Comet ISON could peak at magnitude –10 or brighter at perihelion (when it will be just 1° from the Sun), and that it could remain visible to the unaided eye from early November to the first weeks of 2014.

An added bonus is that the comet passes very close to Mars in early October 2013 and could potentially be observed by the sensitive Mast Cameras on the rover Curiosity.

A sequence of four images, taken early on September 24th, shows the slight motion of Comet ISON (center) against background stars over a 13-minute interval. To capture these views, Belgian amateur Erik Bryssinck used a 20-inch (0.5-m) remotely operated iTelescope.net reflector at Mayhill, New Mexico. The field of view is about 24 arcminutes wide.

Of course, a lot can happen in the coming year. I'm old enough to recall how the much-heralded Comet Kohoutek (C/1973 E1), whose apparition was over-hyped, ultimately proved very disappointing (read: "complete dud"). And yet, Comet ISON has "turned on" very early — it's still 6¼ a.u. from the Sun, well beyond Jupiter's orbit. Moreover, its orbit bears striking similarity to that of the Great Comet of 1680, a dazzler with a very long tail so bright that that reportedly could be seen in daylight. Dynamicists are wondering whether that object and Comet ISON are fragments of the same parent body.

Regardless, it's been a long dry spell since Comet Hale-Bopp (C/1995 O1) put on its long-running show in 1997 — though Comet 17P/Holmes briefly caught our eye in 2007). Now prospects are good for beautiful appearance from not one but two celestial visitors next year. Comet Pan-STARRS could provide the warm-up act in March, followed by headliner Comet ISON eight months later.

I vividly remember Comet Hyakutake that preceeded Hale-Bopp thru the inner solar system. Very spectacular and I hope this one can compare. Comets are rare enough to inspire awe in us all, young and old, cynic and poet, scientist and theologian.

Considering it's still at a lowly mag 18, these guys did a great job of catching C/2012 S1 (ISON). They used different instruments at a robotic observatory in the Canary Islands to image it: http://goo.gl/U5xEG

This is probably going to be the most imaged comet of all time!

Since we “up here” missed out on the Great Comet McNaught of Jan 07, there is probably a tendency to wonder what we might see compared to that, specifically the famous photo McNaught himself took on 1/19 which was the APOD of 1/22/07.
Based on info I could find, my estimate puts the head of McNaught a few degrees above the horizon at the end of civil twilight that night at Siding Spring. Similarly my estimates put Comet ISON on the horizon, if up at all, at the beginning of civil twilight on the two mornings (11/26 and 12/1) when it could be of similar magnitude as McNaught in the photo. Between those dates it is even closer to the sun, and one day before and one day after, there is a drop of one whole magnitude, so those two days are the only possibility of seeing something like McNaught, and based on what I have, there is no possibility, assuming the predicted mags are close.
Some accurate charts of when and where the best views of the comet will be realized, based on a combination of (predicted) magnitude and sky darkness, would be helpful in an initial estimate of how great a view we might get.
My guess is it will be better than Hale-Bopp, but not as good as West or Hyakutake, as far as seeing a stunning tail.

What are the coordinates of the two new comets?

For ISON, that currently only goes out to 10/25/2013. To get more you have to use: http://www.minorplanetcenter.net/iau/MPEph/MPEph.html

How big is the nucleus? I read elsewhere that it's two miles/three kilometers in diameter. That can't be right.

I put the orbital elements for ISON into both SkyMap and SkyX and both agree it will be to the right of the sun, heading north, in early December morning skies. It should be well placed for viewing in the northern hemisphere, but think its path through Serpens, then Hercules in December means setting our alarm clocks. Did I do something wrong? I used the same technic with PANSTARRS data, and get the same trajectory in evening skies in March, just east of square of Pegasus, that the diagram in Sky&Telescope shows...Hope I am wrong, and would be glad to share my two paths with anyone wishing .jpg images as attachments. My e-mail is wwooten@pensacolastate.edu

It will be interesting to see if Comet ISON turns out to be one of the greatest naked-eye comets in history.

I just built a new comet site which can be found at http://www.fallofathousandsuns.com/comets.html

I have been studying dark/collapsed matter and I believe comet nuclei are dark matter (micro black holes).

They clump like bubbles in space and become energetic when they enter a mass energy dense area of space and break up and can be dangerous depending upon their orbital path.

I have a blog @ darkmattersalot.com

COMET ISON may be the return of the STAR OF BETHLEHEM

the orbit of COMET ISON brings it back every 333 years,
so it can be established that the comet was here in 15 a.d.
considering that an exact year has never been established
for the birth of christ,
is it more than coincidence that
there was a census in 14 a.d. called by Caesar Augustus?