The strongest and most reliable meteor showers are the Perseids of August and December's Geminids. Balmy weather and summer vacations have made the Perseids well known and popular, but the Geminids are actually easier to view from mid-northern latitudes. For one thing, nights are much longer in December. And while the Perseids are best viewed just before dawn (as most showers are), you can easily get an eyeful of the Geminids during the evening hours. 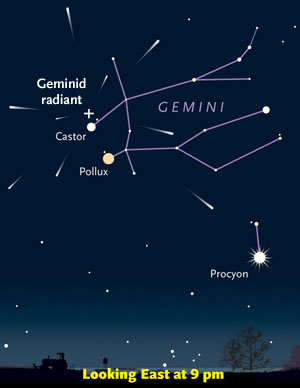 The radiant is the perspective point where a shower's meteors would all appear to be coming from if you could see them approaching from the far distance. In reality they flash into view only when they hit Earth's atmosphere â€” which can happen anywhere in your sky. But their directions of flight, if you trace them backward far enough across your sky, all cross this point.

This year the Moon will be nearly new when the Geminids peak on the night of December 13-14. The shower's radiant, the point in the sky from which they all seem to originate, is near Castor and Pollux. It's well up in the east by 9 or 10 p.m. and crosses near the zenith (for mid-northern observers) around 2 a.m.

The shower should peak around 5:00 Universal Time on the morning of the 14th, corresponding to midnight EST and on the 13th at 9 p.m. PST — excellent timing for North America and Western Europe. Under dark-sky conditions you might see as many as 120 medium-speed meteors per hour. (Light pollution reduces the numbers.) The shower is active to a lesser extent for at least a day or two beforehand and about one day after.

The Geminid meteor shower is extremely unusual in that its parent object isn't a comet. Instead, it's an asteroid, a chunk of rock roughly 3 miles across called Phaethon (pronounced FAY-uh-ton). How can an asteroid produce meteoroids? Nobody knows for sure. Many scientists believe that Phaethon is the core of a comet that's been baked completely dry. Maybe a smaller asteroid collided with it long ago. In any case, a ribbon of debris lines Phaethon's orbit. 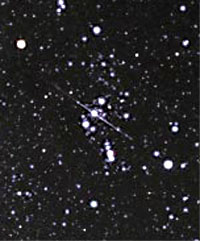 Meteor watching couldn't be easier. Lie back in a reclining lawn chair, relax, and watch the sky overhead. Ideally, you want nothing but sky in your field of view — not trees, and certainly not the ground. That means that you should either lie flat on your back or recline so that you face at least 45° above the horizon. Also remember that December nights are cold at mid-northern latitudes. Normal winter clothing won't even come close to keeping you warm after you've been lying still for a couple of hours. The best solution is to use a sleeping bag. Second best is plenty of blankets over your warmest clothing. And don't forget a hat and gloves!

The arriving Geminids will cover the whole sky, so it doesn't really matter which way you're pointed. If you look straight at the radiant, you'll see meteors coming directly toward you, bright but with short trails. Look the opposite way, and you'll see lots of long meteors moving away from you.

Careful counts of meteors have scientific value. Click here to learn how to conduct a scientific meteor count and how to report your results to the International Meteor Organization.

Update: It was indeed a great year for the Geminids! The shower peaked at about 150 meteors per hour (the Zenithal Hourly Rate: the rate as would be seen under ideal conditions) during the late hours of December 13th Universal Time, according to this preliminary activity profile posted in near-real time by the International Meteor Organization.

With over 30yrs of stargazing, and many observed viewings of meteor showers, I was surprised to see the comments presented at the end, to the above article " A Great Year for Geminids "

Stating that (it Doesn't matter which way you are pointed), for viewing the shower, I thought was confusing to the public.
I have done many many public outreach, and yes, though you can see meteors in all directions, and longer ones in opposite of radiant, there are Better chances of seeing MORE IF you look toward the radiant. In this respect to the northeast. Case in point, from that direction the observer can see shooters, going to left, to right, below and of course over head. Plus, also see even some coming straight at you, as stars lighting up and then fading away quickly, a stunning sight for the fortunate.
Looking in opposite direction, you really are only seeing part of the pie effect, or(umbrella effect) of the radiant point of source. Besides, I have seen many stunning bright long ones, even though looking in the direction of radiant.
Just my view point, no pun intended.
Dennis

Why oh why do we call them meteor showers? Once again, plenty of showers and no meteors! From rainy Britain.

Ack! I accidentally marked the incorrect date on my calendar, so I missed the Geminids last night! Will it be too late to see any tonight (12/14)?

Got pristine skies between rainstorms!
Over all impression:

The shower seemed to have peaked around 05:00 UT December 14th. I detected a second peak about a half an hour later.
Most shower members were blue-white in color and averaged a magnitude 0, increasing to about -1 or so later in the night.
They seemed to come in "groups".
Before the fog and low clouds moved in, I was easily seeing down to magnitude 6.
I was treated to a sporadic meteor that was brilliant green in color and was estimated to be
a -9 or -10! This occurred at 04:12 UT, December 14.
I observed by myself.

Fog and low clouds moved in shortly after 06:00 UT, and no real trustworthy count could be done. I sensed two peaks, as shown in my numbers. The meteors towards the end of my observing session, seemed to be brighter than those at the first.
I would rate this shower as equal to or better than the the August Persied show.

Hello, I am from Bhuj-India and belongs to Kutch Amateur Astronomer's Club. To watch Geminids I travelled to a place 15 kms from my city. From there we could see 5.5th magnitude stars with unaided eye. On the way we count 4 meteors! Overall we counted 310 meteors. I gave up counting at 4:00am and did some visual comet hunting through my 25x100 binocular. I saw 5 meteors passed through the eyepieces! That was the best meteor shower in my life. I counted 241 meteors of the Geminids in year 2004. To read full story and magnitude graph, see my blog.