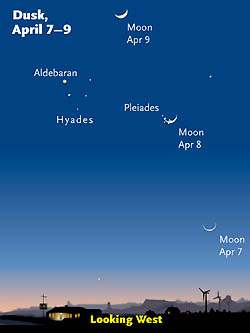 The three-day-old Moon is always sublime, thick enough to see easily but thin enough to be otherworldly. On the 8th the crescent is unusually high at dusk and right next to the Pleiades, the sky’s finest naked-eye star cluster. Normally the Moon overpowers nearby stars, but not when it’s this thin.

Lucky viewers in eastern Canada and the northeastern US even get to see the Moon occult (cover) some of the northern Pleiades, starting around 9:45 p.m. EDT. The Moon’s leading limb will be well lit by earthshine but still dim enough that it will be easy to watch the stars wink out.

Eastern Ontario is ideally placed, with the occultations starting when the Moon is high in a fully dark sky. Farther east, the Moon sets while occultations are still in progress. In the southern US the Moon passes north of the Pleiades, and on the West Coast, the closest approach takes place in broad daylight. But whether you see the Moon inside the Pleiades or just near them, it will be a magnificent sight.

This is a very good article but I wish the very favorable thin crescent opportunity for North America the night of April 6 had been mentioned. From mid-USA, the moon was about 21 hours old and set an hour after sunset. Although not truly that difficult for those who have seen it before, the threadlike crescent was an impressive sight. In spite of so-so conditions of haze and some low cloud, I could easily spot the crescent in binoculars. Under better conditions I am sure it could have been easily seen with the naked eye. I note that an observer in France got an outstanding picture of the 15 hour crescent from there. I think the thin crescent moon opportunities are far more interesting to most readers than a marginal glimpse of Venus low in the dawn. I agree that the pairing on the 8th is an event worthy of interest to the general public- indeed we have named our newborn baby daughter Maia, after the eldest sister in the Pleiades!

Watch a Bright Star Wink Off and On