Ceres is the largest asteroid and the smallest dwarf planet. On October 25th, it will occult a faint star in Virgo. Results from amateur observers could aid the forthcoming arrival of NASA's Dawn spacecraft.

Fresh off last week's stellar occultation involving Patroclus, a binary Trojan asteroid out near Jupiter, David Dunham, who heads the International Occultation Timing Association (IOTA) has again put out a call for assistance in recording an asteroid that is about to cover up a star.

This time the event involves 1 Ceres, which is both the largest known asteroid and the smallest known dwarf planet. But it's also the destination of NASA's Dawn spacecraft, now en route, and this occultation is the last before Dawn's arrival in February 2015.

Although Ceres has been resolved repeatedly by the Hubble Space Telescope and by ground-based observatories, careful occultation records have the potential to determine both the body's true diameter (estimated at about 590 miles or 950 km) and how much its shape deviates from a perfect sphere — keys to understanding its interior structure. 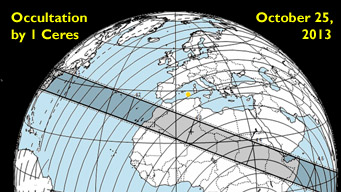 The shaded path represents Ceres's "shadow" during the asteroid's occultation of a 10th-magnitude star from 9:40 to 9:46 Universal Time on October 25, 2013. At that time the Eastern Hemisphere will be in daylight, but the event should be visible before dawn to observers along the East Coast of North America. Click on the image for a larger version.

The occultation takes place Friday, October 25th, from 9:40 to 9:46 Universal Time. As the map shows, the wide occultation track favors the Eastern Hemisphere, but it will be daytime in that part of the world during the event. So IOTA's efforts are focused on the East Coast of the U.S., where Ceres will be low in the eastern sky before dawn. Those inside a zone from southern Maine to South Carolina, and no farther inland than a line from southern Michigan to northern Georgia, have a chance to see it.

"The forecast shows that it should be clear along the Atlantic coast (the only hiccup is a band of cloudiness predicted near the NC-VA border)," Dunham reports, "so I hope that many observers can try this, the second valuable asteroidal occultation in the U.S. this week!"

This will not be an easy observation, however — and not simply because you'll have to get up before dawn. Right now Ceres is magnitude 8.8, three times brighter than the 10.0-magnitude star it will cover up. (Typically the occulting asteroid is much fainter than the target star.) Light from a last-quarter Moon will add to the challenge.

Moreover, while the occultation might last up to 22&fraf12 seconds, depending on your location, the drop in light will be only about 0.3 magnitude. That slight dip would be quite challenging to detect visually. Instead, ideally you should use an 8-inch or larger telescope, preferably equipped with a video camera.

Alternately, suggests by veteran Australian observer John Broughton, you could use a single long exposure with a cooled astro-camera. "The trick is to point the telescope to certain coordinates (not at the target) and to turn off sidereal tracking at a particular time," Broughton explains. "The occultation target star will then drift into the field of view on schedule, shortly before the exposure is started, and the resulting star-trail image can be analyzed photometrically."

For more information, check the Ceres page of IOTA's website.