Look eastward after darkness falls, and you'll see a gleaming beacon that outshines everything else in its vicinity. That's Jupiter! On July 9th, the king of planets reached opposition, the point in the sky opposite the Sun — it rose as the Sun set. Each night afterward it's been inching a little higher in the evening sky as darkness falls. 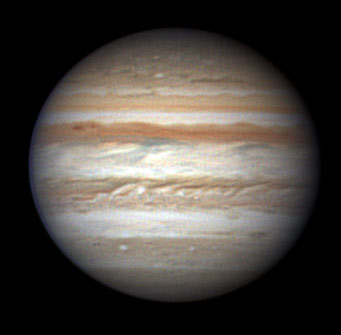 Your scope won't show all the details seen in this image by astrophotographer Christopher Go. But if the sky is steady, your telescope should reveal Jupiter's bright Equatorial Zone sandwiched between its tawny-colored North and South Equatorial Belts (dark bands just above and below center).

No matter how you look at it, Jupiter is so bright and easy to spot that it makes an inviting telescopic target. What makes Jupiter such a treat is that it offers more to see in a telescope than does any other planet. It's the only one that shows distinct features in almost any telescope. And it's got four large moons that hover nearby like bright fireflies.

Before tracking down Jupiter with your telescope, grab your binoculars and find a tree or wall to brace against while pointing them toward Jupiter. If your binoculars magnify at least seven times (they'll be marked "7×35" or "7×50," for example), you'll see Jupiter as a tiny white disk. Look closely to either side for a line of tiny stars. Each of those tiny blips is a Jovian satellite at least as big as our own Moon; they only look tiny and faint because they're more than 1,500 times farther away.

Put a low-power eyepiece (the one with the highest number engraved on its barrel) in your telescope, then maneuver the tube so that Jupiter is centered in the eyepiece. 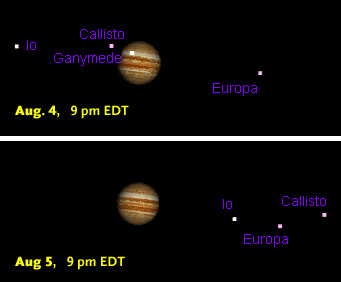 Jupiter's four largest moons seem to shuttle from one side of the planet to the other as they orbit. So where you see them on any given night is not where they'll be a day later. Click on the image to reveal Ganymede's location on August 5th!

You might see two, three, or four moons, depending on when you look. The count often changes from night to night (or, if you're patient, even from hour to hour). That's because while orbiting Jupiter they sometimes glide in front of the planet, behind it, or into its shadow. These hide-and-seek movements confounded Galileo Galilei when he first spied these "stars" in 1610. But he soon realized they were actually circling around Jupiter, forming a miniature solar system of sorts.

The moons are named Io, Europa, Ganymede, and Callisto — or, collectively, the Galilean satellites — and it's difficult to tell which one is which. Callisto is usually (but not always) farthest from Jupiter, and Ganymede is a little brighter than its siblings. Fortunately, help is just a few mouse clicks away, using our online guide to identifying them.

Now turn your attention to Jupiter itself, and two things should be noticeable. First, the disk may not look perfectly round. Jupiter is a "gas giant" — it consists almost entirely of hydrogen and helium, and the "surface" you see is actually the top of a thick cloud layer floating high in an atmosphere thousands of miles deep. Jupiter spins so rapidly, rotating completely in less than 10 hours, that its equatorial midsection bulges out a bit.

Jupiter's cloudtops exhibit a complex sequence of dark belts and and bright zones, caused by jet streams within its upper atmosphere. This view shows north at the top, but you'll see a south-up view in an inverting telescope such as a Newtonian reflector — or in a refractor, Schmidt-Cassegrain, or Maksutov used without a star diagonal. Telescopes used with a star diagonal will have north up but east and west reversed.

Second, you should be able to see that the planet has two tawny-colored stripes running parallel to the row of moons. These darkish cloud bands in the Jovian atmosphere are called belts, and the brighter ones are zones. The North and South Equatorial Belts straddle the bright Equatorial Zone like a cream-filled cookie sandwich. If your telescope's main mirror (or lens) is at least 6 inches, you might be able to pick out a few other belts and zones closer to Jupiter's poles.

The most famous cloud feature on Jupiter is the Great Red Spot, an enormous oval-shaped storm about twice the size of Earth. Astronomers have known about the Red Spot for at least 150 years, but there's still no agreement as to which chemical compounds create its distinctive color.

Be forewarned that seeing the Great Red Spot is a challenge to spot in a small telescope. Your best prospects will be when the spot is nearest the middle of Jupiter's disk, which is a snap to figure out thanks to our handy Javascript utility. The planet's rapid rotation means that these "windows of opportunity" last only about an hour, so be prepared to look for it over several consecutive nights. Also, don't expect to see a bright red blob. The spot's color is subtle — much closer to pale orange than crimson.

If I've whetted your appetite and you want to really delve into what Jupiter's disk has to offer, check out John McAnally's excellent guide to observing the planet.

I am just beginning to get into astronomy and I read Kelly's article about Jupiter yesterday ( 7/23/08 ) and so I looked up in eastern sky last night in my yard (in Michigan, near Detroit )and sure enough there was Jupiter shining brightly. So I got out my little 3 inch reflector that I bought years ago and trained it on Jupiter and walla, there it was with 3 or 4 moons spread in a line.
I could just make out the belts Kelly spoke of too. I was so excited I brought a couple of neighbors over to see it too. Very cool!
My mount is a little frustrating because it doesn't have any smooth adjustment mechanism and it is very hard to keep the image centered in the eyepiece. I have to constantly look through my finder scope and relocate it. I guess I need to purchase a better scope or at least a better mount?
I also noticed that no matter what lens I used I seemed to get pretty much the same view. I suppose with a small scope that is to be expected?
Thanks for any feedback.

I reckon the greatest frustration a neophyte astronomer can have is the Mount. 15 years ago I bought a nice little 6" reflector scope at a yard sale for around $20. It was Great but I could never stay on target and, like a fool, ended up selling the scope. All because of the Mount!

An article from Hubble Space mention that the Hubble Space Telescope was unable to see Jupiter during 29 June 2008 to 7 July 2008 due to the possition of Jupiter, which this period is the collision of 3rd red spot with GRS and Oval BA. I keep wondering why this can happen? Anyone can enlighten me??