When amateurs Anthony Wesley and Christopher Go simultaneously videorecorded a bright flash on Jupiter last June 3rd, it drove home the startling realization that such events probably occur — and are observable — more often than anyone had imagined.

On August 20, 2010, at 18:22 Universal Time, Japanese amateur Masayuki Tachikawa recorded a brief flash on Jupiter (upper right of center) using a 6-inch (150-mm) f/7.3 refractor and a webcam. North is up; the Great Red Spot is distinct below center, and Ganymede is at lower right. North is up. Click here for the movie!

Well, guess what? Based on a video captured by a Japanese amateur astronomer, it's just happened again! Masayuki Tachikawa was observing Jupiter early on the morning of August 21st (18:22 Universal Time on the 20th), when his video camera captured a 2-second-long flash on the planet's disk. The location was along the northern edge of Jupiter's North Equatorial Belt, roughly at 17° north and System II longitude 140°.

News of the flash reached astronomer Junichi Watanabe (National Astronomical Observatory of Japan), who posted details and an image on his blog.

Tachikawa, who lives in Kumamato City on the island of Kyushu, was observing with a Philips ToUcam Pro II attached to his 6-inch (150-mm) Takahashi TAO-150 f/7.3 refractor with a Tele Vue 5× Powermate. You can view the (south-up) video here — thanks to Daniel Fischer for providing this link. 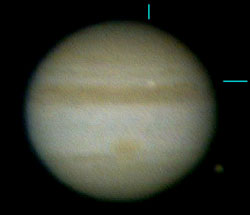 Whatever caused this flash, it's not a glint from an orbiting satellite. "After announcement of the flash to Japanese community," Watanabe told me via email, "another amateur astronomer looked back his data taken independently — and found the flash exactly at the same place at same time."

Tokyo amateur Kazuo Aoki posted an image here and his video here. Notably, Aoki has refined the moment of impact to within a second of 18:21:56 UT. He was using a Celestron 9¼-inch telescope and a Philips ToUcam Pro video camera.

The two observers were separated by some 500 miles (800 km), ruling out something near Earth as the cause. 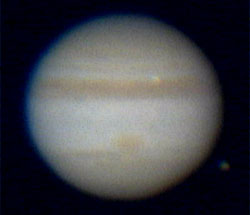 A frame from Masayuki Ichimaru's video on August 20, 2010, clearly shows a flash along the top edge of Jupiter's North Equatorial Belt. He used a Borg 125SD f/6 refractor and a 7-mm eyepiece to project the planet's image into his video camera.

Word from Isshi Tabe, who's coordinating reports about this event for the Association of Lunar and Planetary Observers in Japan, is that a third sighting was made by Masayuki Ishimaru. He was using a Borg 125SD f/6 refractor and a 30-frame-per-second video camera in Toyama City, about 160 miles northwest of Tokyo. You can view Ishimaru's video here.

Interestingly, at the time cloudy weather prevented both Chris Go and Anthony Wesley from observing Jupiter. According to John Rogers (British Astronomical Association), observers report nothing at that location one Jupiter rotation prior to the event time. Watching the planet two rotations afterward, Phillipine observer Tomio Akutsu found no trace of the possible impact; French observer Marc Delcroix also saw nothing in a series of images from the ultraviolet to near-infrared.

As luck had it, Imke de Pater (University of California, Berkeley) and Heidi Hammel (Space Science Institute) were in the midst of a two-night Jupiter run using the Keck II telescope in Hawaii when the strike occurred. "Judging from the position we definitely observed that region," de Pater says, "but we didn't notice anything anomalous at the telescope." They'll look over the images more carefully once they return home. "The solar system just is a busy place!" Hammel quips.

To Jupiter specialist Glenn Orton (Jet Propulsion Laboratory), the flash looks like another June 3rd event. "Perhaps the time has come," he adds, "to establish a worldwide network of Jupiter-monitoring telescopes so that the planet can be watched 24/7."

Does this then mean that Jupiter is NOT a planet, since it clearly has not after all cleared its neighborhood?
::: tongue firmly in cheek :::

I could well imagine putting up my refractor on the balcony and have a PC capturing video for as long as the planet was in the field of view. The question is, does some piece of software exist that could identify any transient events - no matter whether it's a transiting plane, bird, satellite flare, or an actual impact?

Ideally, the program would scan the incoming video and only save those periods to disk that include such events (some seconds before and after, with time stamps). Such software does exist for Webcams being used as monitoring devices, however, I doubt that those programs optimized for detecting motion in ordinary daylight scenes would work on the wobbling picture of Jupiter.

Does anybody know if such software already exists? Or would someone knowledgeable about image processing volunteer to write it? That would be a long way towards 24/7 monitoring of Jupiter.

A planet was shining a couple of days ago in the north west at the left of the crescent moon. I live in Lebanon and would like very much to know what is this planet? It is a very big a luminous one, the time was after midnight on a clear night.

@Juliette: that's the planet Venus. Next to it there are Mars and Saturn (see the pictures I took recently: http://guillermoabramson.blogspot.com/2010/08/la-danza-de-los-planetas.html). Jupiter can be found a little before midnight in the eastern sky, and climbing.

@ Dieter Kreuer
I thought the same thing Dieter. I have some software that records fireballs when they occur but the brightness difference of a bright fireball against an otherwise black sky versus a slight change in brightness on an image of Jupiter would be tougher I think. Someone with smarts must have written something that could detect these small changes.

@Juliette: I can't say with certainty what the planet is because of some contradictions. However, I believe that Guillermo is correct that it was Venus, with dimmer Saturn and Mars nearby, shortly after sunset on the 13th. However, if you are looking at midnight on the night of the 26th-27th, a gibbous moon will be near Jupiter. One thing to remember: if you see a luminous planet, it's usually Venus or Jupiter.

@ Ted Judah and Dieter Kreuer: I think some kind of cross between the motion detecting software Dieter mentioned, the fireball detection software Ted mentioned, and supernova detection software is what's needed, coupled with something like Galaxy Zoo for monitoring the automatic routines, if the 24/7 Jupiter watch goes large scale. Unfortunately, I don't know anything about writing image processing routines.

Thank you for answering me, I think it is more Jupiter, Venus usually in Lebanon is seen very early before midnight, while this planet is after 1.30hrs midnight.

"'Perhaps the time has come to establish a worldwide network of Jupiter-monitoring telescopes so that the planet can be watched 24/7.'"

Based on the fact that these flashes are being found and verified by multiple observes, I wonder if that network does not already exist, albeit informally.

I have mentioned a day ago about seeing the moon in my telescope. I noticed a black hole and not far another one which had a flash of light, it happened twice while I was looking, I would like to know what could that be! Thanks

My guess is that some of the routines required to do this kind of stuff already exist in the form of programs like Registax. I'm thinking of something along the following lines: assuming that the âaverageâ impact lasts ~ 2 seconds (as reported in the article), you build a âreferenceâ by continually stacking the latest ~ 30 seconds of video (this is essentially a running average). This is long enough such that a 1 or 2 second flash does not affect the average, but short enough not to be affected by Jupiter's rotation and other long period transient effects. In addition, you create an âactualâ image by continually stacking the latest ~ 1 second of video (you could work with a single frame here but I suppose stacking reduces the effects of detector noise, hot pixels, turbulence, etc.). Now if the brightness of a number of adjacent pixels within a certain radius (depending on the resolution of the imaging system, assuming that the flashes are point sources) in the âactualâ image ***simultaneously*** differs from that in the âreferenceâ image by a certain amount (the threshold will be determined by the noise, which can be estimated from the image data), this ***may*** signify a detection and the software should save the relevant frames to a file and tag and archive them. The length of video used for the âreferenceâ and âactualâ images and the threshold for a positive detection may need some fine-tuning and could be incorporated as input parameters. Luckily we already have the video data for a couple of detections, so we have a number of test cases for our algorithms. I guess most of the building blocks required to do this are already available; the challenge will be to get this to run real-time on a home computer. Good luck!

Flashes seen visually, with your own eyes, are almost certainly from lightning, airplanes, or fireworks. The other two possibilities are a satellite that happens to have given a brief reflection of the Sun, or a very short-lived meteor moving directly toward you.

The moon
Posted by Juliette August 27, 2010 At 10:10 AM PDT
I have mentioned a day ago about seeing the moon in my telescope. I noticed a black hole and not far another one which had a flash of light, it happened twice while I was looking, I would like to know what could that be! Thanksh

So what did they found on the Keck images? And BTW they could say/show more about data/images of Jupiter they got with Keck.