There are two kinds of astro-chasers in this world. Members of the better-known breed, the self-proclaimed "umbraphiles", journey to exotic destinations in the hope of standing in the Moon's shadow during total solar eclipse. 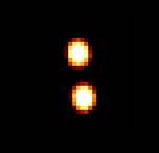 Here's how the binary asteroid 90 Antiope looks when recorded by the giant Keck telescope in Hawaii. This infrared image was made on July 15, 2011, just four days before Antiope occulted the star LQ Aquarii.

The other group chases down occultations (brief cover-ups) of stars by asteroids. These occultations aren't nearly as flashy as the solar corona, but they can be just as rewarding — and sometimes have far more scientific value.

An excellent case in point was July 19th's occultation of the star LQ Aquarii by the much dimmer asteroid 90 Antiope. Three circumstances set this occultation apart from the scores of other such events predicted this year: (1) the star is relatively bright, making it easy to see in even relatively small telescopes; (2) Antiope is a big, close-bound pairing with nearly identical halves about 55 miles (90 km) across; and (3) the predicted track crossed a well-populated chunk of the Far West.

This was such a high-profile opportunity that members of the International Occultation Timing Association agreed to hold their annual meeting in Rocklin, California — directly in the event's path. Expectations were high, buoyed by the prospect of clear weather along much of the track.

IOTA members weren't the only observers who'd gathered for the event. European astronomers, who've studied this unusual asteroid for many years, mounted a substantial campaign coordinated by François Colas (Paris Observatory) and Franck Marchis (SETI Institute) . "The point of this occultation," Marchis explains, "was to confirm the shape of the components, confirm the presence of the crater, and find which component has it." 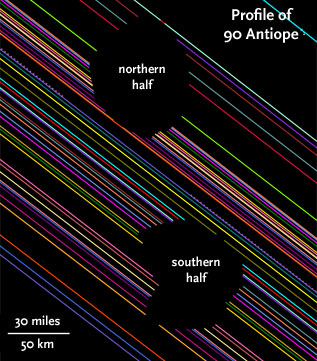 More than 50 observations (colored lines) obtained on July 19, 2011, create the chords that silhouette the like-sized halves of asteroid 90 Antiope. The lines are broken where the star LQ Aquarii disappeared on the right side of each body and reappeared on the left. Note the indentation (a crater?) on the lower component. Click here for a larger view.

I'm happy to report that Antiope did not disappoint. As the plot at right shows, observers collected more than 50 well-timed observations, spread out (by design) across and along the track in such a way that the collective blink-outs define the sizes and shapes of the two components with better fidelity than is possible by even the mightiest of professional telescopes. In particular, the southern one is missing a big chunk along its eastern (trailing) limb that's perhaps a crater. Interestingly, earlier observations had hinted that this deformity exists.

Based on images made a few days beforehand with one of the giant Keck telescopes, a team led by astronomer William Merline (Southwest Research Institute) predicted that observers along the track's centerline might see LQ Aquarii clipped by both halves of Antiope. But in reality the gap was wider than expected. "A few observers in the middle had no occultation by either component," explains David Dunham, IOTA's president. "We're debating whether to call these central miss observations 'Moses chords' or 'Hercules chords', for threading the Pillars of Hercules to gain new knowledge."

Initial reports suggested that the recorded light curves of LQ Aquarii revealed the star itself to be a double. "We're still debating the reality of the secondary star," Dunham says. "But for sure, the red giant primary has a significant angular diameter, causing all events to be gradual, lasting almost a second or more."

This year's meeting of the International Occultation Timing Association (IOTA) was held in Rocklin, California, so that attendees would already be in the path of the stellar occultation by asteroid 90 Antiope on July 19, 2011.

One highly anticipated bonus from the July event was supposed to be a live webcast of the star's disappearance and reemergence as seen through one of the 18 small telescopes set up by diehard occultation observer Scotty Degenhardt of Columbia, Tennessee. Although I and many others tuned in as the event time neared, my monitor went blank a few minutes before the spectacle. "Fear not!" Degenhardt says. "I was recording while broadcasting," and he's uploaded what we all missed in a YouTube video (the occultation itself begins about 7 minutes into the 9½-minute clip).

Dunham and others are still poring over the Antiope results. But this occultation surely ranks among the most remarkable and scientifically valuable in recent years.

Here's what I find ironic about all this: Back in the 1970s, Dunham and others argued strenuously — but in vain — trying to convince professional astronomers that a few occultations had revealed the existence of binary asteroids. Then the Galileo spacecraft discovered that asteroid 243 Ida has a tiny companion (later named Dactyl), and professionals' resistance quickly waned. Today more than 200 multiple asteroids are known.

You can click here to learn more about IOTA and here for predictions of upcoming occultations that you might be able to observe. And you'll find several articles right here on SkyandTelescope.com about how to view and record occultations.

I recall doing a visual timing of an asteroid in the early 80s from a darkened football stadium in Yukon, Oklahoma. Wayne Wyrick and I each were at a 'scope and independently saw the hint of a double blink, and passed our timings and observations along to IOTA. We never heard if any other observers had similar observations, and our subsequent musings to IOTA about the possibility of a binary were fairly well dismissed, as I recall. Thirty years later it's nice to know we might have been right.

You wrote: " Back in the 1970s, Dunham and others argued strenuously — but in vain — trying to convince professional astronomers that a few occultations had revealed the existence of binary asteroids." ... uh ok. How do we distinguish noise from reality?? Were any of these from "back in the 1970s" confirmed? I remember those observations, and most seemed to lack confirmation. If they were weak observations at the time, and if they remain unconfirmed, then the professional skepticism was fully justified.

Frank: I reviewed the evidence in a short article titled "The Binary Brouhaha" for S&T's January 1995 issue, shortly after the discovery of Dactyl around Ida. At that time the three highest-credibility cases for occultation-detected binaries were 216 Kleopatra (now known to have satellites), 532 Herculina (no satellites found by HST), and 6 Hebe (jury is still out).

Following up on "still poring over this event's results", a few more chords have come in since publication. See the Antiope links at http://www.asteroidoccultation.com/observations/Results/.
-Ted

First, the early claim of possible duplicity of LQ Aquarii from the July 19th occultation observations were soon found to be just noise superimposed on the gradual disappearance and reappearance of the star that were caused by the red giant's angular diameter of about 2 mas, which we are in the process of refining from the observations.

In the 2nd comment, FER asked:
"Were any of these from 'back in the 1970s' confirmed? I remember those observations, and most seemed to lack confirmation. If they were weak observations at the time, and if they remain unconfirmed, then the professional skepticism was fully justified."
- Yes, most of those observations were weak, but one of the better old observations, by Gerry Rattley and Bill Cooke at locations about 600 yards apart confimed each other, during an occultation of an 8th-mag. orange star by (216) Kleopatra on Oct. 10, 1980. The occultation by Kleopatra was seen by nine observers in the Pacific Northwest, but Gerry and Bill were in northern California, about 300 miles outside the main event path. When the probable satellite of Kleopatra occulted the star briefly for Gerry and Bill, they noticed the change in color from the orange of the star to the gray, almost green by contrast, of the fainter asteroid, also remarked by observers of the main event. A few years ago, Kleopatra was found to have two small moons from large telescope adaptive optics observations, and a few months ago, the orbit of one of the moons was found to intersect Gerry and Bill's observation 1980 observation.

I don't have any kind of astronomical wisdom or insight into this information about Antiope but I think the southern half of Antiope should definitely be identified as pacmanoid.