Asteroid 2011 MD, a chunk of rock estimated to be 20 to 65 feet (5 to 20 m) across, is expected to pass less than 8,000 miles above Earth's surface around 1 p.m. EDT (17:00 UT) on Monday, June 27th. The actual event will be observable only from South Africa and parts of Antarctica, but the approach will be visible across Australia, New Zealand, southern and eastern Asia, and the western Pacific.

When word spread about the approaching asteroid 2011 MD, Peter Birtwhistle used his 16-inch (0.4-m) f/6 Schmidt-Cassegrain telescope to capture it. Each of these two frames is a combination of five 20-second exposures, taken on June 23, 2011, from 1:41 to 1:45 Universal Time.

The asteroid was spotted on June 22nd by LINEAR, the Lincoln Near-Earth Research project. Its discovery was announced on Thursday morning by the Minor Planet Center.

The asteroid's orbit is uncannily similar to Earth's orbit. But there's no chance that the asteroid will hit Earth on this approach, and almost no risk at its next close approach, in 2022. If the asteroid did strike, it would probably explode in the upper atmosphere — a fine spectacle, but harmless.

Nor is it a piece of space junk from a 1962 launch, as was suggested early on. Additional observations have made it possible to calculate 2011 MD's orbit past and future quite accurately. Bill Gray, a well-known expert on orbital dynamics, has run the orbit backward in time, and is now quite sure that this asteroid could not have been close enough to Earth any time during the space age to have started off as a rocket booster. So it seems to be a genuine chunk of rock after all.

This is not the closest known asteroid approach; in fact, a smaller asteroid actually struck Earth in 2008. In addition, three other asteroids have come closer than 0.00012 astronomical units (11,000 miles) from Earth's center, the estimated distance of 2011 MD at its closest.

However, this is probably the biggest known asteroid to have come this close. Note the phrase "known asteroid." No doubt many asteroids much bigger than this one made close approaches without being detected before the near-Earth-object (NEO) surveys ramped up in the 1990s. According to asteroid specialists at NASA's Jet Propulsion Laboratory, an asteroid of this size should pass this close to Earth every six years on average. 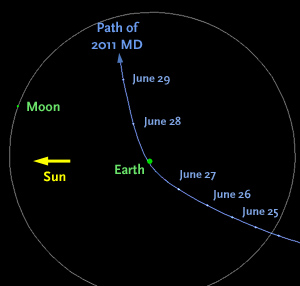 The path of asteroid 2011 MD near Earth. The asteroid's orbit is actually highly inclined; here it's been projected into the plane of Moon's orbit. The dot for each date corresponds to 0h Universal Time. Click on the image for a larger view.

The logistics for seeing the moment of closest approach are poor. It takes place in broad daylight and halfway between the southern tip of South America and the northernmost point in Antarctica. The event is visible fairly low in the sky in deep twilight from South Africa.

However, the asteroid should be visible in the hours leading up to the closest approach across Australia, New Zealand, southern and eastern Asia, and the western Pacific. The farther south you are, the better. The farther west you are within this zone, the shorter the period of visibility, but the closer to Earth the asteroid will be when it disappears.

The asteroid will be very hard to observe after its closest approach, since it's departing more or less toward the Sun.

To observe the asteroid you will need a good telescope (the bigger the better), excellent charts and the know-how to use them, and ephemerides from either the Minor Planet Center or the Jet Propulsion Laboratory. Make sure you enter the proper latitude and longitude. With an object this close, a small difference in the observer's location makes a huge difference where it appears in the sky.

Australian amateur Dave Herald has posted a series of short video clips taken as the asteroid passed by Earth. And here's a beautiful < a href="http://www.youtube.com/watch?v=p-pv18xDWCY" target="new_window">4.7-hour sequence, tracking the asteroid as it moved quickly among background stars, acquired by Jure Skvar? with the 24-inch (0.6-m) telescope at ?rni Vrh Observatory in Slovenia.

I got to see 2002NY40 when it blew by us a few years ago. One of the very few times I have seen transient phenomenon in my eyepiece. Perhaps I will give this one a try.

I thought any hunk of rock orbiting the sun is categorized by this rule: Meteoroids are less than 50 m in size asteroids are larger. Since this one tops out at no more than 18 m, isn't it incorrect to list it as an asteroid?

I estimate the angular size at closest approach to be only about 0.2 arc seconds. So a diameter measurement may be barely possible, but no detail will be visible

I hope S&T will be able to track down & post some images of the event from some lucky observers.

Terry, it depends on whose definition you are using. The NEO project includes objects up to 50 m as meteoroids, probably because they are mostly focused on objects of 1km and larger.
The IAU defines a meteoroid as ""a solid object moving in interplanetary space, of a size considerably smaller than an asteroid and considerably larger than an atom", which is awfully vague, but is the "official" definition. There was another proposed definition last year that a meteoroid would be between 100 micrometers and 10 m in diameter.

This makes me curious...what would be required in terms of mass, velocity, angle of approach, etc., for an asteroid to be captured into Earth orbit as an additional natural satellite?

I suspect there would be a range of answers. More simply put, would this be possible?

Robert, just like a spacecraft arriving at a planet, the trick for capture into earth orbit is to loose sufficient orbital velocity ... which would be easiest to achieve using a lunar flyby - ie. the moon assisting in the capture. The second option would be aerobraking in the upper atmosphere - but the margins between a slingshot flyby and oberbraking and burning up are so narrow that it is rather unlikely as a not actively steered maneuvre.

Another thought: with the orbit and size of 2011 MD as it is, chances are that it is not an asteroid/meteoroid at all, but an old upper stage used to propel a spacecraft into solar orbit (I think all the Apollo IVB stages still in space are accounted for, so it's unlikely to be one of them).

Exoplanets (planets not from our solar system) is a recent finding of astrophysicists and some of them are causing concern to all of us on the Earth because they are orbiting in the wrong direction and therefore dangerous as well. Some astrophysicists feel that such retrograde planets can question the basis of well-known planetary theory - see for example: http://www.eso.org/public/news/eso1016/

In view of this background the close approach of asteroid 2011 MD, this week, is frightening and all of us, scientists and public, have to look into all aspects of the motion of such dangerous objects, especially the direction of motion. This quest revives a long forgotten challenge, posed by retrograde moons of Jupiter and Saturn about 100 years ago. In one, sense we are unfortunate in being in a troubling solar system, as explained in the second point of my letter in CHANGE, May-June 2008, p. 5, http://changemag.org/Archives/... That point can be understood even by a student of age group: 15 to 18 knowing basic laws of circular motion.

Anyone else try this on JPL Horizon's? 2011 MD is not listed.