For the second time in six months, the Sun has graced Down Under with an eclipse. Only a lucky few caught this annular eclipse, which traversed sparsely populated northern Australia. 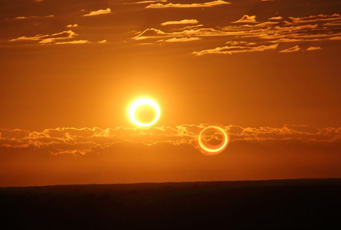 The "ring of fire" eclipse appeared above a cloud bank of faraway thunderstorms. The real eclipse is overexposed, and the double image comes from reflection within the camera's lens.

Yesterday's annular "ring of fire" eclipse passed over only sparsley populated regions, although Australians, Hawaiians, and others caught the partial phases.

"Just six months after the Moon's shadow last touched down on Australian soil (the glorious total solar eclipse in North Queensland which I attended as part of the Sky & Telescope / Insight Cruises tour), another solar eclipse graced our shores. This time, it was an annular, visible across parts of northern Australia, with the partial stage observable elsewhere throughout Australia.

I chose to observe this one from home in Sydney, enjoying the first partial solar eclipse I'd seen from my home of 11 years. It was a beautiful sky with not a cloud to be seen, and I followed the Moon as it eclipsed up to ~27% of the Sun. I had solar glasses from last year's eclipse trip with me, along with an iOptron solar 60 refractor."

"Dawn was strange," says Jörg Schoppmeyer, who watched the eclipse in northern Australia with Nicole Hollenbach and others, observing from a hill near the Great Northern Highway around 70 km south of Newman.

"The eclipse started under the horizon and the light from the more upcoming sun was compensated by Moon blocking more and more of the Sun. So the morning somehow refused to start." 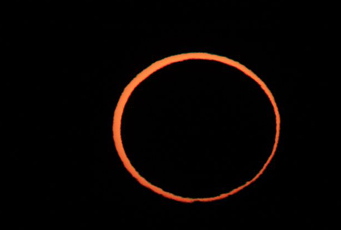 JÃ¶rg "Schoppy" Schoppmeyer shot this close-up on the annular eclipse.

"We can report good success in observing 4 min 20 s of annularity at the eclipse today, about 100 km north of Tennant Creek, Northern Territory, Australia. At the side of the road there was a turnoff to a hill that carried a radio repeater, and about 100 people had gathered there in the very early morning in anticipation of the 8:05 am annularity.

There were clouds in the sky, and much of the eclipse was viewed through thin clouds, though rarely after the first few minutes was the sun obscured. The clouds thinned considerably before annularity, which was observed in a pretty clear sky. The air cooled noticeably when the Sun was almost entirely covered, and the shadows sharpened because they were being cast by a thin crescent of sun."

Observing an eclipse begets hunger for more. "We now look forward to the next total eclipse of the Sun, which will be visible from Gabon, Africa, on November 3," says Pasachoff. (S&T will be guiding a tour to Kenya to view this eclipse.) "Another annular eclipse, on April 29, 2014, will have its annularity visible only from an inaccessible ocean spot off Antarctica, but Australia will see about 60% coverage."

Bryant adds, "As the Moon shrank away from the Sun, I thought to what lies ahead for me here in Sydney." After the April 2014 eclipse, "the next partial eclipse is in 2023, though it will be less than what I saw today. That 2023 eclipse is total in Western Australia, the first of FIVE total solar eclipses that will cross Australia between 2023 and 2038!"

"One of those is the total solar eclipse in July 2028, with totality visible from my backyard. I'm looking forward to that, but it's still 15 years away. Inspired further by this morning's beautiful views, I think I might have to do some eclipse-chasing in the meantime..."