Three partial solar eclipses happened during 2011, and the third act of this celestial trifecta occurred earlier today. Many of us associate solar eclipses with a blacking-out of the Sun, and so perhaps fittingly today's event fell on what's known as "Black Friday" in the United States. — so-called because businesses often ring up enough pre-holiday sales to put them "in the black," profit-wise, for the year. 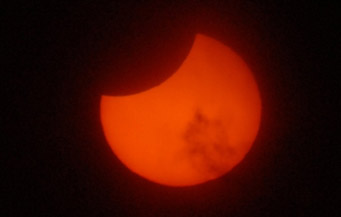 In any case, no one in the U.S. saw the Moon take a bite of the Sun today, and in fact few people anywhere could see it. The path began well south of Africa, and from Cape Town the Moon's indentation on the Sun's disk was barely noticeable. Mid-eclipse occurred at 6:10 UT, at which time all of Antarctica was experiencing a partial event that covered 40% to 90% of the Sun's diameter (78% at the South Pole), depending on location. Observers in Tasmania and southernmost New Zealand also got a peek just before sunset.

Skies were generally clear at both ends of the track. Jörg "Schoppy" Schoppmeyer recorded nice views of the slightly dented Sun just after sunrise from his location in Cape Town. 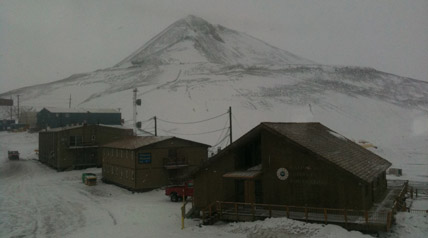 "This is what it looks like toward the position of the Sun — the best we can tell! — out of the 2nd floor window at Crary Lab in McMurdo, Antarctica," writes astronomer Chris Walker.

Astronomer Jay Pasachoff (Williams College) observed with a small group from Invercargill, New Zealand, where the Moon's encroachment was a more substantial 30%. "About 5 minutes before the peak, the sky cleared," he reports, "and we saw the eclipsed Sun clearly, with clouds occasionally drifting by, for about 15 minutes." Later the Sun sunk into a low cloud bank. "After an in-and-out, off-and-on-rain day, we are very pleased," Pasachoff adds.

The weather wasn't as cooperative at at McMurdo Station on Antarctica. "The temperature is around 15°F, windy, and snowy," writes astronomer Chris Walker (University of Arizona). "Sounds like Thanksgiving weather all right — but wait: it's summer here!" 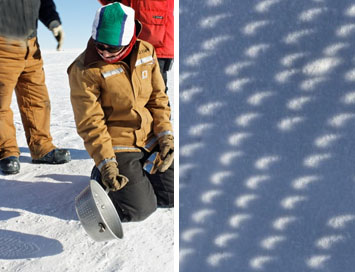 A kitchen sieve made a handy viewing device during November 25th's solar eclipse, projecting hundreds of tiny crescents on the snow at the South Pole.

Clear skies prevailed at the South Pole, where a few of the researchers and support personnel ventured outside for a look at the eclipsed Sun. One was Kiell Kosberg, who had big plans for the event. "You should have seen my bag," she writes on her blog. "I looked like a one-woman band getting ready for a performance. A welding mask, blank CDs, hand warmers, aluminized mylar squares, a cup of coffee and a sieve borrowed from the kitchen. We went out to the ceremonial pole, cameras in hand."

This solar eclipse, occurring as it must at new Moon, is a warmup for a total lunar eclipse on tap for the full-Moon night of December 10th. That event, the Moon's last complete immersion until 2014, will be seen best from Australia, eastern Asia, and western North America.