With two upcoming meteor showers, you could catch loads of shooting stars. And you already have all the equipment you’ll need: your eyes. 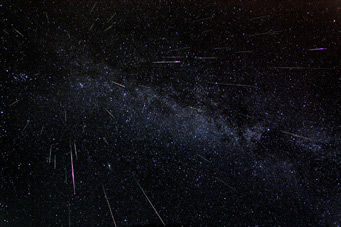 Amateur astronomer Fred Bruenjes captured hundreds of long-exposure pictures from the 2004 Perseid meteor shower and arranged 59 of them in this composite image. Notice, the meteors appear to originate from the same point.

When a meteor streams across the sky, we call it a shooting star. You can see meteors any time of year, but rates pick up significantly from late July through August. The powerful Perseid meteor shower peaks around August 12th, and several lesser showers lead up to and join the Perseids. The strongest of these is the Delta Aquariids, which ramps up from July 27-31, then tapers slowly until late August.

The event is visible from as far north as Canada and Northern Europe, though the rate of meteors per hour rises as you move farther South. At the shower’s peak, northern skywatchers can expect to see about ten meteors per hour, and southern observers twice as many. On any given night the rates will pick up around midnight, peak around 3 a.m., and dwindle as dawn approaches. The Moon will begin next week as a waning crescent, so though it'll wash out some meteors early on, it'll fade as the week continues, leaving dark skies by the time we get to the peak of the Perseids. 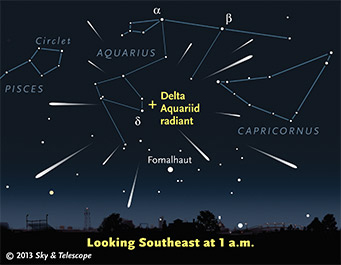 The Delta Aquariid meteor shower peaks in late July. Here's what the sky looks like on one of those nights around 1:00 a.m. (EDT), when the shower is approaching full strength. The meteors appear to streak away from a spot called the radiant, which lies about 10Â° above the bright star Fomalhaut and near the much fainter star Delta (δ) Aquarii — hence the shower's name.

If skies aren’t too cloudy, set out after midnight (early birds might try closer to dawn). Find a place away from bright city lights and unobstructed by large trees or buildings. Aquarius will be below the Great Square of Pegasus, about halfway between your horizon and the zenith (directly overhead). The meteors will appear as bright, yellow streaks in the sky, coming from the star Delta (?) Aquarii also known as Skat (from the Arabic word for shin because of where the star lies in the constellation), which will be the third brightest star in Aquarius at about 3rd magnitude. The star Fomalhaut will be the brightest object in this part of the sky, so you’ll know you’re in the right place if you’re about 10° (about the width of your fist held at arm’s length) above the bright speck.

Get a small group together, grab some lawn chairs or a blanket, maybe even some background music, and head out to the countryside for some good conversation and meteor-watching. If you’re out when the two showers overlap, see if you can tell which constellation the meteor belongs to – Delta Aquariids will fire from Aquarius and Perseids from Perseus. And don’t forget to keep the white lights to a minimum! You’ll have a better chance at spotting the meteors if your eyes are dark adjusted.

If you have a local meteor-watching place in mind, NASA has a nifty online app that will tell you the expected meteor count based on your location and a date you choose.

A Quick Refresher for Newbies

If you’re new to stargazing, things can get confusing when we start talking about comets, asteroids, meteoroids, meteors, meteorites … ugh! For simplicity’s sake let’s say that comets are chunks of ice that glow spectacularly near the Sun as the ice melts into gas and dust, which reflect starlight. Asteroids are more like baby planets, made mostly of rock and metal. Meteoroids are the pieces broken off from comets or asteroids, and many find their way into Earth’s atmosphere. If they burn up, they’re meteors – what we think of as shooting stars – from the Greek word meaning “high in the air”. If meteoroids make it through the atmosphere and land on Earth, it’s a meteorite. The most likely source of the Delta Aquariids is Comet 96P/Machholz which was discovered by an amateur astronomer.

To help find your way around the constellations, check out page 7 of our free getting started guide to help you find Aquarius or download this free planetarium software to get familiar with the sky.

If you don't have it already, now's a good time to get NASA's Meteor Counting App. We're getting closer to the launch of LADEE and once it's at the moon they'll be using your meteor counts to correlate with activity on the moon: http://science.nasa.gov/science-news/science-at-nasa/2011/13dec_meteorcounter/