Most people have never knowingly seen Mercury. That's a pity, because viewing the innermost planet is very rewarding, whether you use a telescope, binoculars, or just your unaided eyes. 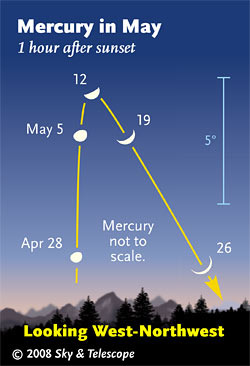 The problem with Mercury is that it never strays far in the sky from the Sun, so it's usually visible only very close to the horizon in bright twilight. But people at mid-northern latitudes (the US and most of Canada, Europe, and Asia) have an extraordinarily good opportunity to view the elusive planet on evenings in May 2008. Throughout most of the month, Mercury is high above the western horizon a half hour after sunset, and it's still reasonably high even an hour after sunset, when the Sun's glow is quite subdued.

As always when it's visible in the evening, Mercury is brightest at the beginning of the apparition, fading from magnitude -0.8 on May 1st to 0.3 on May 12th. That's nearly a threefold decrease, but magnitude 0.3 is still dazzlingly bright.

Mercury fades rapidly after mid-month, making it a challenging target for the unaided eye. But this is also when the planet is at its best through a telescope, swelling in apparent diameter and thinning to a crescent as it starts to come between Earth and the Sun. Following Mercury with a telescope throughout an entire apparition is surprisingly satisfying. 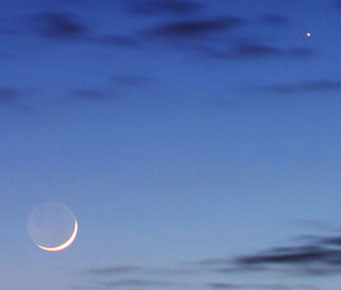 Mercury shines 3° upper right of a thin crescent Moon. This photo is cropped from a much larger and lovelier image that's available on the photographer's website.

Mercury makes interesting patterns with other astronomical objects on two occasions in May. From May 1–3, it passes just to the left of the Pleiades. The planet will be easy to see, but you might need binoculars to spot the Pleiades when they're so low in the sky. In any case, the cluster and the planet will fit easily in a single binocular field of view.

Then on Tuesday, May 6th, North Americans can watch Mercury make a spectacular pairing with a 1½-day-old crescent Moon. It's almost identical to the scene shown at right, except that the positions of the bodies will be reversed, with Mercury to the Moon's lower left.

I just took the family out to the everglades, about 15 minutes away from home. We have never seen Mercury before and I wasn't sure we'd see it tonight. I didn't think it would be high enough to see from home, so we headed out west where we could see the horizon unobstructed. If you've ever been out in the glades at nightfall, you know the mosquitos swarm like bees!

Well, I set up the 4" refractor on my alt/az mount and watched the sun go down. I was surprised to easily see Mercury naked eye. I just wasn't expecting it, and there it was, just beneath and to the left of the Pleiades.

A first for the whole family!

I observed Mercury tonight May 04 at 21.30 hours with my unaided eyes from West Wales U.K .

I got to see Mercury for the first time on Sat may 3rd. I was at Lake Oconee about an hour East of Atlanta , GA and Mercury was setting across the lake. Using a homebuilt 8" reflector it looked like it was flickering with a red and white color. I couldnt get it completely in focus being that close to the horizon after a warm day there was plenty of turbulence.

It did turn out decent later in the night. Clouds held off long enough for me to show some friends Saturn, Mars, and Mercury. Along with a few galaxies and a planetary nebula. It was a very enjoyable night sinec I normally do all my viewing from the extremely light polluted sky around Atlanta.

Tonight, I set up my 4.3" refractor in the driveway at sunset. At 2025 hours EST, Mercury appeared for a nice viewing here in Boca Raton, FL. It was nice to view the iron planet without the nuisance of mosquitoes which we encountered at the everglades on May 1. My wife, kids, and neighbor were all impressed with the sight.

The heavens declare the glory of God...

The last two nights have been clear here in the UK, and Mercury and the Moon looked superb on the evening of the 6th, with Mercury approx 2.5 degrees to the left of the 3% illuminated crescent Moon. I think it's one of the best unaided eye views of the planet that I've had for a long time. Whilst it was fascinating to see the planet's 57% illuminated phase, using an 8" reflector, the unaided eye scene was the most impressive. Having the opportunity to sit and watch such a beautiful twilight takes some beating.

That Person from Seattle

My house has a good view of the west horizon. I was looking for mercury with my 15x50 Canon Image Stabilizer binoculars, then with the naked eye. I couldn't find anything.

Sounds great. I wish I would have gotten this email on April 16th rather than May 16th