The two brightest asteroids are very close to each other in the sky in 2014, fitting in a single field of view through binoculars and some telescopes.

Vesta and Ceres are normally far from each other in the sky. But every 17 years swift Vesta, with an orbital period of 3.63 years, catches up to slower Ceres in its 4.60-year orbit. In 2014 they're traveling through Virgo in tandem, never more than a few degrees apart in the sky.

Meanwhile, NASA's Dawn spacecraft, which orbited Vesta in 2011-2012, is en route to Ceres. It's much too small and distant to see through a telescope, but if you could, you'd see that it is also very near both asteroids in the sky.

Click here for a full-page printable finder chart for Ceres and Vesta in 2014. 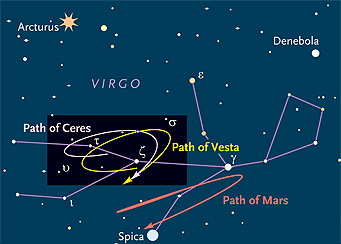 Click the link in the text for a full-page, printable map of Ceres and Vesta's paths through Virgo in 2014.

The two asteroids are visible in the predawn sky in January, and they're reasonably well placed in the evening sky by early April. Vesta is at opposition on April 13th and Ceres on April 15th, at which time these asteroids shine at magnitude 5.8 and 7.0, respectively — their brightest for 2014. Although Vesta is just 60% Ceres's diameter, it appears much brighter because it's 40 million miles closer to Earth and the Sun, and because its surface reflects more of the light that falls on it.

The two asteroids' closest approach in the sky occurs on July 5th, when they're just 10 arcminutes apart. But by that point they have faded considerably and are inconveniently low by the time the sky is fully dark.

Incidentally, there is an error in the Ceres/Vesta chart that appeared in the February 2014 issue of Sky & Telescope. The paths are correct, but the labels are reversed. So if you look there for Ceres you will find Vesta, and vice versa