Count the Stars to Save the Sky

For generations, amateur astronomers have measured the quality of their skies by the naked-eye limiting magnitude (NELM) — the faintest star that can be seen without optical aid. The relentless spread of light pollution has added a new urgency to this time-honored method. It's now possible to measure skyglow directly both from the ground and outer space, but NELM remains the only good way to compare current conditions against the past, to see how light pollution progresses over time. 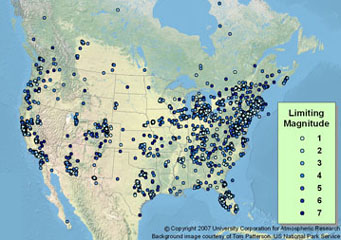 More than 6,000 people across the globe participated in the Great World Wide Star Count of October 2007.

Besides, only dedicated stargazers are likely to invest in a specialized device to measure skyglow, like Unihedron's Sky Quality Meter. But with a little help, every man, woman, and child with normal vision can estimate the limiting magnitude. And the Internet makes it possible to gather and correlate the data on a scale that was never possible before.

This year's count runs during the two weeks of moonless evenings from October 20th to November 3rd. See the home page for details about how you can participate.

So why not pitch in? It will take just five or ten minutes of your time, and it's lots of fun. It's also a great opportunity to get your family and neighbors to look up at the sky. There's nothing like asking people to look for stars to make it painfully clear just how onerous poorly designed lighting can be.

Thanks for informing us about the Count the Stars program.

Thanks for posting this information. I was lucky enough to find this early and had clear skies on 10/20/08. My observation was #57.