One of my very best trips to view an eclipse came in October 2005, when I joined two European astro-buddies at a carefully picked spot northeast of Madrid to witness an annular eclipse shortly after dawn. 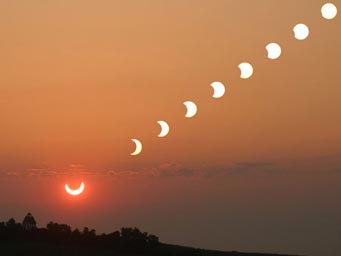 Observers in Europe saw a partial solar eclipse on May 31, 2003. From his observing site near Vienna, Austria, Peter Wienerroither recorded this view of the eclipsed Sun using a Canon EOS 10D digital camera.

Now I'm wishing we could all return to that spot on Tuesday morning, when the Sun will climb over the horizon with a big rounded bite missing from its top and fat spikes of the solar disk jutting upward to either side like the horns of a bull.

That said, the closer you are to the point of greatest eclipse — in northern Sweden for Tuesday's event — the deeper the Moon's "bite" in the Sun's disk will become. So I've pulled together a table with times for selected cities (p.m. in bold; for other cities, click here). Note that the last column gives the Sun's obscuration, the maximum fraction of the disk's area to be covered. I mention this because other websites often give instead the eclipse magnitude, how far the Moon bites into the Sun's diameter, which to me isn't nearly as intuitive.

I probably don't need to remind you — but I will anyway — that viewing the solar disk directly (whether partially eclipsed or not) can damage your eyes in seconds if you're not very careful. 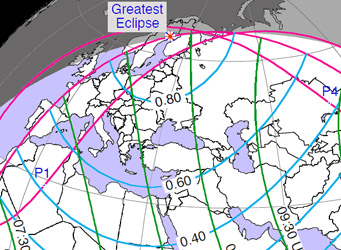 January 4th's partial solar eclipse favors viewers in northern Europe, western Asia, and northern Africa. Blue lines show how much of the Sun's diameter is covered; green lines give Universal Time for mid-eclipse; pink lines show where the event begins at sunrise (at left) or ends at sunset (at right). Click on the image to see a global view.

Fortunately, there are many easy ways to watch the Sun safely. For example, you can use glasses equipped with special solar filters, or look through a #13 or #14 arc-welder's glass. (Sunglasses, no matter how dark, are not safe for solar viewing.) You can also create a pinhole projector, one of several methods described here.

This will be an interesting year, eclipse-wise. In 2008, 2009, and 2010, we eclipse junkies got to view a total solar eclipse somewhere in the world. No total or annular eclipses occur during 2011, but there'll be four partial solar eclipses — and January 4th's is the only one observable from well-populated areas.

So, my Europeans friends, find some clear sky if you can, because you won't get another opportunity to see the Sun covered to this extent until March 20, 2015.

Alas, Tuesday morning's weather prospects for Europe are generally poor. Bummer! That means they'll miss both the eclipse and the brief peak of the Quadrantid meteor shower, which also favors European observers and should occur before dawn on eclipse day.

If you do have clear skies for Tuesday's "Moon Bites Sun" event, please share a picture with the rest of us by posting it in our online image gallery.

Was all set up and hoping for a fine day but woke up to rain... The clouds didn't even break for a few seconds. Had to revert to watching it online thanks to your links.

Here was cloudy and the clouds were a filter! Everybody watch the eclipse 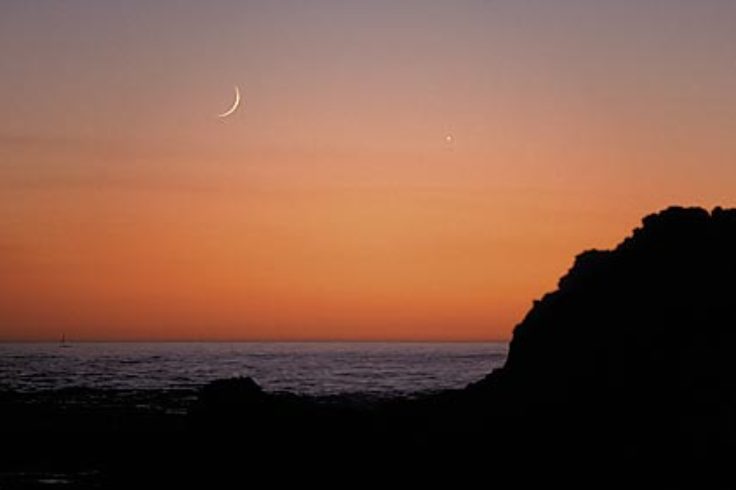 Could the lunar crescent be seen in a telescope at new Moon?