As the most Earth-like planet in the solar system, Mars often attracts a hefty share of attention when it graces our skies every two years. Only weeks past opposition, Mars is generating a bigger buzz than usual among observers in online astronomy forums. An unusual protrusion has appeared in the planet's southern hemisphere, preceding the sunrise terminator. 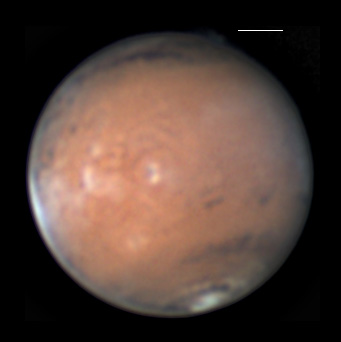 On March 20th, the slightly gibbous disk of Mars showed an unusual extension along the day-night terminator in its southern hemisphere (white line). This image is shown south up, as it would appear in many telescopes.

It was first noticed on the evening of March 20th by Pennsylvanian amateur Wayne Jaeschke. He alerted the international Mars-observing community to an odd "extension" occurring at 190.5° east, 43.7° south, occurring just before the area should rotate into daylight. The feature was visible in all color-filtered exposures from near-infrared to blue light, and he produced a short animation of the feature rotating into view.

Other planetary imagers also report capturing the feature as the area rotated into view during the past few nights, and planetary photographers from Europe have identified it in their images as far back as March 12th. Although there has been plenty of conjecture as to what this strange extension might be, nothing has been proven as of yet.

Many past observers have reported projections on the terminator caused by either white clouds or suspended dust, says Richard McKim of the British Astronomical Association. Observers are most likely to report them when using large telescopes visually and when the planet is close to quadrature (90° from the Sun), when Mars appears at its most gibbous, illuminated less than 90%. McKim notes that such a report is very unusual when Mars is still as near opposition as it was this time, 98% illuminated.

Although unusual, similar "terminator projections" have been noted throughout observational history of the Red Planet, the last being imaged by Japanese amateur Isao Miyazaki on November 8, 2003.

Observers are encouraged to keep monitoring this region, which should be well-placed for viewing from the Americas during the next few days. The phenomenon should be visible early on March 24th at about 5:10 Universal Time (1:10 a.m. EDT, and on the 23rd at 10:10 p.m. PDT), then 39.5 minutes later each successive night.

Hopefully, scientists involved with the Mars Reconnaissance Orbiter, which produces daily images of the planet, will be able to determine if this is a weather-related event. Observers should send their observations to Richard McKim of the BAA at richardmckim_at_btinternet.com (replace "_at_" with "@").

When you say this might be a weather-related event, would that be like a big dust storm? It makes sense that a dense cloud of dust well above the surface would rotate into sunlight before the landscape below crossed the terminator into daylight.

Could this be a result of a large impact?

Even if was a volcano, it would have to be massive in size to show up as a protrusion like that. We have mountains and volcanos that don't protrude off our planet like that. And astronomers long before now would have seen it.