It seems like yesterday, but back in November 2003 I boarded a chartered jet that carried about 80 of us out over the frozen wastes of Antarctica to witness a total eclipse of the Sun in midair. At the time I took a mental tally of how many others might have seen it too. I came up with about 500 in all — counting a second chartered jet, an icebreaker off the coast, and an expedition to a Japanese research station.

The annular eclipse on February 7, 2008, was only visible from narrow path (yellow) that sliced across Antarctica and the South Pacific Ocean. Click on the image for a larger view. And click here for an animated map showing how the eclipse looked from various cities in the region.

But my experience pales compared to the lengths that French eclipse-chaser Xavier Jubier went to for February 7th's annular eclipse. He decided to view it from atop Vinson Massif, whose summit (16,062 feet or 4,897 meters) is the highest in Antarctica.

To get there, he first flew on an Ilyushin IL-76 jet from Punta Arenas, at the southern tip of Chile, to the Patriot Hills "depot" in Antarctica, and from there he took a Twin Otter flight to the Vinson base camp. A couple of staging camps later, he was ready for the arduous trek to the summit, where temperatures near -40°F (-40°C) awaited him. And, yes, he did make it, as the following brief post to an eclipse-watcher mailing list attests:

"Managed to see annularity through a thin layer of clouds. However it was quite windy up there and taking eclipse pictures was a real challenge, not to mention various camera/lens problems. Came back safely to high camp after an exhausting 21-hour journey and now preparing to descend the headwall before the next storm comes in. The return to the base camp will likely be after the storm."

While many penguins no doubt experienced the event, besides Jubier's small group the only other humans who likely saw the annular Sun were those aboard a Russian vessel, Akademik Fedorov, that happened to be performing maintenance work at the otherwise uninhabited Russkaya Research Station. I'm still trying to determine if the skies there were clear on eclipse day. 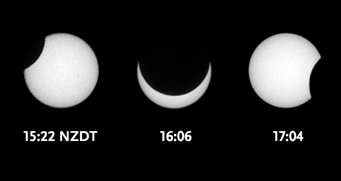 At the South Pole the eclipse covered 80% of the Sun. This sequence by Ethan Dicks shows the event's progression over 1h 42m (times are given in New Zealand Daylight Time). Click here to see his entire sequence.

Others had success outside the path of annularity. For example, at the South Pole, where the Moon gobbled up 80% of the Sun, Ethan Dicks braved -55°F to record the shots seen at right (his full series is here). "For the photographically curious," he reports, "I used an Olympus E-10 with a 1.4× tele-magnifier, giving an equivalent focal length of 200 mm. I made a double-layer mylar filter, which stopped down the light enough for me to shoot at 1/640 (fastest shutter speed available) and between f/5.6 and f/8."

From the relative comfort of Nelson, New Zealand, Williams College astronomer Jay Pasachoff and his wife, Naomi, watched as the Moon covered and uncovered 53% of the Sun's disk over a 128-minute span. For Pasachoff, who chairs the International Astronomical Union's Working Group on Eclipses, this was his 46th solar eclipse. 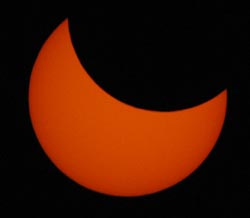 This solar eclipse happened at new Moon (as they all do). Two weeks later, on February 20th, the full Moon undergoes a total lunar eclipse that'll be observable throughout Europe and the Americas. It's going to be cold, I'm sure, but nothing near -40°F!

And on August 1st, for the first time in 28 months, the Moon will once again hide the Sun completely. For this total solar eclipse, I'll once again be boarding a chartered jet to intercept the Moon's shadow in midair. Wish me luck!

There was also some "extreme eclipse chasing" in South America in 1994. I and ten other climbers spent 10 days climbing 21,500-foot (6500-meter) Nevado Sajama, which lay well within the path of totality for the 3 Nov 1994 total solar eclipse. Nothing is certain at such altitudes and the team ended up at various altitudes of the mountain for totality. None of our climbers stood on the summit during totality although two who made it shortly afterward observed the eclipse from just below the summit. The group was spread out from about 16,000 to 21,000 feet. A German team of climbers, who had heard about our plans and decided to give it a try themselves, preceded us to the mountain and some of them successfully observed the eclipse from the summit. The astronomer among them afterward told me that from 19,500 feet he had seen the shadow approaching over Peru a full seven minutes before totality!