Jupiter dominates the evening sky this January, outshining even the dazzling stars of winter. And if you're an early riser, you know that the Moon currently dominates the predawn sky.

From Saturday to Monday morning, January 5-7, the Moon passes the first-magnitude star Spica and the planet Saturn, as shown in This Week's Sky at a Glance. But that's just a wind-up for the main event. 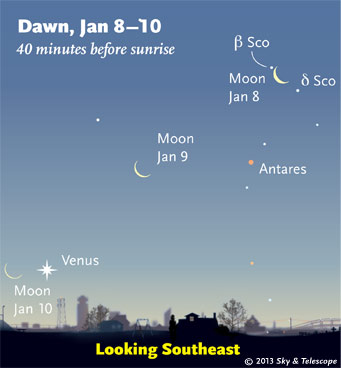 The waning crescent Moon appears lower each morning until dawn on Thursday, when it forms a spectacular pair with Venus very low in the southeast.

On Tuesday morning the Moon passes through the claws of Scorpius, and on Wednesday it's well to the left of the striking red-giant star Antares. For us northerners, Antares is the signature star of early summer, so its presence in the dawn sky presages the coming of summer.

Finally, most dramatically, an extremely thin crescent Moon floats just 2° or 3° left of Venus on Thursday morning. This takes place very low in the southeast during twilight, so will need a location with an unobstructed view to the southeast. But it's well worth the effort.

Conjunctions of the Moon and Venus are always spectacular because these are the night sky's two brightest objects. And this one is better than most both because the Moon is so close to Venus and because the Moon's crescent is so thin.

Furthermore,Venus is appearing lower each dawn, en route to disappearing behind the Sun in February. So this is the last good Venus-Moon conjunction until May.

The pair rises more than an hour before the Sun, and in the relatively dark sky it should be easy to see earthshine lighting up the "dark" part of the Moon inside the crescent. Binoculars enhance the view greatly.

Follow the pair as they climb higher and the sky grows brighter. If the air is clear, you may be able to track them long after sunrise. But of course you must take great care not to look directly at the Sun. That's especially true if you're using binoculars; viewing the Sun with binoculars is likely to cause instant eye damage.