When I posted that blog about the Sun back on Tuesday, I knew I was jinxing things. Sure enough, Tuesday afternoon was cloudy here. Wednesday brought more lousy weather, and they're calling for rain tonight. So I was shocked when I saw a brief break in the muck over Boston this morning. 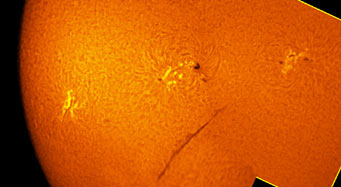 The Sun as seen through an H-alpha filter in New Hampshire on March 27th. At this wavelength, the three spot groups are highlighted by bright emission features. Note the long dark filament, a prominence seen in silhouette. This view is a mosaic of four images. Click image for larger view.

Knowing a good sucker hole when I see one, I rushed to my H-alpha solar scope and peered in to see what I had missed since my last observations. Wow! First off, the spots have certainly evolved. But much more impressive than the spots (at least more impressive to me), was the appearance of a dark filament across the Sun's disk. It looked to my eye as if there was a crack on the Sun's surface. A funny idea for sure, but if I didn't know better, I might have been fooled.

My colleague Sean Walker also managed to see the scene from his home in New Hampshire. He stayed home a bit longer than usual this morning to capture the image above. According to his report, I wasn't the only one peering through holes in the clouds.

What do you guys think? Anyone else having as much fun with these spot groups as we are? Share your observations below, and feel free to submit images to the photo gallery.

Oh, and I can't forget to remind everyone to only look at the Sun with a safe solar filter. Us astronomy writers all take a blood oath to include that passage in every solar story we write.

It's so nice to have an active Sun again. Clear skies! (Or at least clearer than mine will be for the next 48 hours.)

P.S. These spots are not the start of the much-awaited next solar cycle. Their magnetic orientation (with south pole leading as the Sun rotates), and their very low latitude, peg them as last gasps of the old Solar Cycle 23. . . even though the first spot of Cycle 24 (at high latitude, with north pole leading) appeared in January. We're still in the minimum-activity period between the old and new solar cycles.

I read with interest your article on the latest of sunspots. Since I have been observing such spots for the past few years through a 102 mm Maksutov-Cassegrain telescope with a mylar filter, I have wanted to use an H-Alpha filter for more drmatic views of the solar surface. As you know, such a filter for the size of the telescope above would be prohibitively expensive. However, much less expensive H-alpha eye filters are available. My question to you is: Could I use one of these eye filters in conjunction with a mylar filter to get the same (or similar) results as a filter over the objective lens of my telescope or would the results be simply too dark?

Any info or comments regarding the above would be apprecxiated.
Thank you.

This weekend Sean Walker shot another view. You can find it here: http://media.skyandtelescope.com/images/sun+3-29-08++850+flat.jpg