As I sit in my office writing this, an 800-foot-wide chunk of rock is less than 2 million miles away and headed almost straight toward me. No need to panic, though! JPL's Goldstone Radio Telescope, usually used to communicate with satellites, has pinpointed the asteroid's location within 100 feet by radar sounding. At its closest approach, January 29th at 8:33 Universal Time, asteroid 2007 TU24 will still be a comfortable 344,000 miles from the center of Earth. That's 554,000 km, or 1.44 times the mean distance to the Moon. 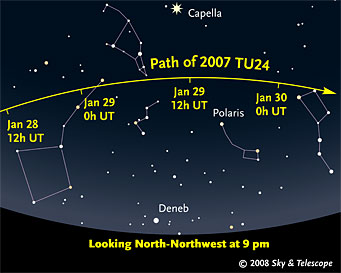 Stargazers at mid-northern latitudes can see asteroid 2007 TU24 all night during its closest approach, because it's passing quite close to the North Star. To convert from Universal Time (UT) to North American time zones, subtract 5 for EST, 6 for CST, 7 for MST, and 8 for PST. So 0h Jan. 29 UT is 19h (7 p.m.) Jan. 28 in the Eastern time zone.

So we're not in imminent danger of destruction — much as that may disappoint the conspiracy theorists. In fact, the only perceptible effect that this asteroid will have on Earth is that several professional telescopes (radio and optical) will be diverted to look at it, and lots of amateur astronomers will be outside trying to see and photograph it.

On the night of closest approach, Monday-Tuesday (Jan. 28-29), the asteroid is predicted to be 11th magnitude or brighter all night for viewers in the Americas, making it visible in small telescopes and large binoculars. At its peak, about 8 hours after closest approach, the asteroid is forecast to be magnitude 10.3. And the brightness should fade fairly slowly, so TU24 will still be pretty easy to catch on the night of Jan. 29-30. (The strikingly asymmetric light curve is due to the angle of sunlight falling on the asteroid.)

Unfortunately, it's impossible for us to publish detailed finder charts, because this asteroid will race across one-fifth of the celestial sphere in a single day. We'd need a small book to chart such a huge swath of sky in sufficient detail to locate the asteroid by star-hopping. Moreover, parallax is huge for an object so close. The asteroid's position among the stars can vary by more than one degree depending what spot on Earth you're viewing from. So your best bet is to go to JPL's Horizons website and generate ephemerides for your particular location. You can then plot these on your favorite star atlas on enter them into your computer's Go To controller.

It's worth the effort, though. At its fastest, TU24 will be traveling 3½° per hour through the "fixed" stars. That's seven times faster than the Moon, and almost half the speed that the surrounding stars drift across the sky due to Earth's rotation. The motion should be directly visible at high magnification through a telescope with a tracking drive.

Click here to download a detailed chart in PDF format showing the asteroid's position, distance, and predicted brightness at 12-hour intervals. And for more information on this hunk of rock, see the NASA/JPL press release.

I'm not clear on how you arrived at the estimation of "almost half the speed that the surrounding stars drift across the sky due to Earth's rotation.” Wouldn’t that be 15 degrees per hour -- 360 degrees divided by 24 hours? In which case, 2007 TU24 is traveling only a fourth that much (that is, relative to those “drifting” stars), no?

You forgot to account for correction equal to the COS(DEC angle) of the background stars. The asteroid is approximately at DEC +55, so the background stars in the area will be drifting at approximately half the rate of those near the celestial equator. Polaris drifts very slowly since it's at DEC 89 and COS(89) = .017 The stars DO appear to drift at 15 degrees/hr, but only at the celestial equator (DEC=0) so COS(0) = 1.

What would classify as 'large binoculars'? I have a pair of 18x50 binoculars. Will I be able to see the asteroid using my binoculars?

Tony answers: 18x50 binoculars should suffice under genuinely dark skies, but it will be a tough observation -- likely requiring averted vision. 15x70s or (better) 20x80s would make the job much easier.

LS, usually «large binoculars» are considered those with 80mm or bigger objective lenses .

I created an animation of the movement of TU24. It is in various video formats on my web page at
http://www.drdale.com/tu24.

the file tu24mpg1.mpg is the best detail and viewable on the widest variety of computers

Here's a link to my blog entry on TU24, with an animation from the asteroid's point of view. It came out pretty well - I still like watching it, imagining I'm on one heckuva ride.

May 20th's Annular Eclipse of the Sun