The alarm clock beeped me awake at 4 a.m., and I popped out of bed full of anticipation. A partial lunar eclipse was under way, the first such for the U.S. in some 2½ years, and I wanted to see it.

Ordinarily I'd have been out of luck: I live near Boston, where the event was unobservable. But good fortune had brought me to Tucson, Arizona, to attend a joint meeting of the Astronomical League and International Dark-Sky Association.

It had been partly cloudy the night before, so I wondered what kind of weather dawn would bring. Stepping to the balcony outside my hotel room, I immediately saw the Moon low on the southwestern horizon. The upper-right half was missing, sliced away by its slow crawl through Earth's umbra. Sweet! 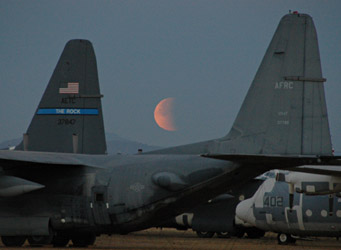 The Moon sets over mothballed warplanes in Tucson, Arizona, during the partial lunar eclipse of June 26, 2010.

I'd brought my Nikon DSLR along in the hopes of capturing the Moon's damaged disk, and I must have looked completely suspicious as I snapped away in the dim light.

More or less satisfied with the results, I decided to watch for an uncommon eclipse phenomenon known as selenelion, seeing the Sun near the horizon and the eclipsed Moon near the opposite horizon at the same time. I'd been tipped off to this possibility by an email from Ray Brooks, an amateur living in southeastern Arizona.

During a lunar eclipse, the Sun and Moon are almost exactly 180° apart in the sky. But refraction near the horizon, combined with looking after mid-eclipse (when the Moon's orbital motion has carried it a bit eastward and thus higher up in the sky), meant that I might see both the rising Sun and the setting Moon simultaneously. It was worth a shot — what the heck, I was already up.

Brooks planned to drive to the top of a nearby mountain with clear views to the northeast and southwest. He calculated that the depressed horizon should let him glimpse selenelion for about 8 minutes before the Moon dipped from sight. I didn't have time to find a mountaintop, and while I had a great view of the Moon, seeing sunrise was a different matter. Low clouds and civilization blocked my view to the northeast.

So I jumped in my car in the hope of finding a clearing. Heading out of town, I stopped alongside the sprawling Davis-Monthan Air Force Base, where hundreds of aging warplanes rest in neat rows. Hmm, maybe I could glimpse the setting Moon, still in eclipse, amid the planes as the rising Sun illuminated the gray metal of their tails. 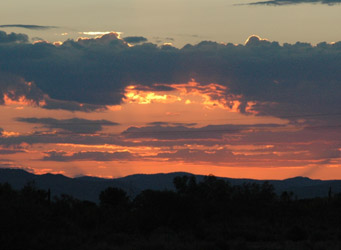 June 26th's sunrise was gorgeous from Tucson — but it didn't come soon enough to be seen before the partly eclipse Moon slipped from view on the opposite horizon.

But it wasn't to be. I had a clear view of the gradually reddening lunar disk, starting to set behind distant mountains that included the famous Kitt Peak. But the Sun wasn't rising fast enough. Above the Moon I saw the Belt of Venus, the telltale pink-and-purple band marking the edge of Earth's shadow projected into the atmosphere. Selenelion just wasn't going to happen for me — too bad. The Moon slipped from view, and it was over.

My effort wasn't a total bust, however. The consolation prize: sunrise was gorgeous.

And Ray Brooks? He awoke at 1 a.m. in order to reach the summit of a 9,000-foot mountaintop for his attempt. Once there, he and wife Dori watched a "dazzling gorgeous hot pink sunrise" over Cooks Peak, 100 miles away, then swung around to watch the Moon set in the southwest. "We got 10 minutes 21 seconds of selenelion!" he exults.

Are there any Amateur (Ham) radio operator/amateur or professional astronomers out there that would like to help with an amateur astronomy combined Ham radio and âStar Partyâ project.

We have an elementary school in Johannesburg (grades K-4th), and a number of somewhat older residents who I think would enjoy such night time adventures!

In previous lunar eclipses when the sun was on the horizon during the eclipse, I liked to think that the shadow of my house was on the moon! (Ok, of course the angular size of the sun as seen from the moon is larger than the tiny angular size of my house so no one on the moon would actually see the shadow of my house, but sometimes the intersection of fact and imagination can come up with some exciting ideas.) Now, if my house was parallel to the sun's rays and I let the sun in one side of the house and out the other end, in the direction of the moon.....

That's fascinating! I have one question though: How is selenelion pronounced? Wikipedia has it defined (as well as the alternative selenehelion) but doesn't give the pronunciation. Wiktionary doesn't have it at all - (it said 'did you mean "selection"?' - no I didn't.)

I know I'm sort of picky about things like this, but over the years I've learned a lot of words through reading, and found out years (or decades!) later that I had been mispronouncing them. I guess that's a natural hazard for people who read - a LOT.