Right now I'm daydreaming of being on the other side of the world — on the tiny island of Malé in the Maldives, to be exact. More than being someplace that's lots warmer and more picturesque than my native Boston is this time of year, tomorrow the 100,000-odd Maléans will, weather permitting, see an unusually long annular (ring) eclipse of the Sun. 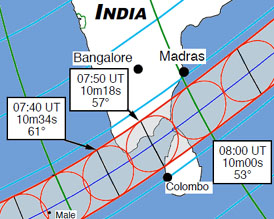 The annular eclipse of January 15, 2010, has a broad path that passes directly between the southern tip of India and Sri Lanka. Click on the image for a larger view.

In fact, notes eclipse guru Fred Espenak, January 15th's event is the longest annular eclipse until the year 3043. Were I in the right place (in the Indian Ocean midway between Madagascar and Sri Lanka) at the right time (7:06:33 Universal Time), I'd be able to watch the Moon's disk completely engulfed by the Sun for 11 minutes, 8 seconds.

Not much of a long-distance swimmer, I'd certainly settle for Malé, where annularity will be nearly as long (10m 45s). Or I might choose the 6m 53s available from Nairobi, the capital of Kenya, or even Chongqing in China (7m 53s). On paper, at least, I could pick a viewing site anywhere along the where the event's 200-mile-wide, 8,000-mile-long track. This eclipse's exceptionally broad path results from the Moon being relatively distant, two days before reaching the apogee of its orbit, and Earth being relatively close to the Sun, having passed perihelion on January 3rd.

The path of January 15th's annular solar eclipse (moving red dot) is only about 200 miles wide. A much broader area, shown in gray, will experience a partial solar eclipse.

The annular path begins at sunrise over central Africa (at 5:14 UT), then crosses open water until it slices directly between the southern tip of India and northern Sri Lanka (at 7:51 UT). The shadow then makes landfall again in Myanmar (formerly Burma) at 8:33 UT before crossing southern China and concluding at sunset just offshore in the Yellow Sea (8:59 UT).

Most everyone in Africa and Asia will see some degree of partial eclipse. In Calcutta and Beijing, for example, the eclipse will become about 75% complete.

If, like me, you're nowhere near the eclipse path, you can witness it vicariously by logging on to one of several online streams provided by dedicated umbraphiles.

You can also check out this year's other eclipses, including a tempting total solar eclipse in July that crosses bits of French Polynesia and Easter Island.