North Americans are envious of people in the Eastern Hemisphere, many of whom enjoyed a long and satisfying lunar eclipse on June 15, 2011.

Reports reaching Sky & Telescope indicate that the weather was favorable over much of the region, especially southern and eastern Europe, Central Asia, and Australia. The Moon rose during the eclipse in Europe, making it hard to discern low on the eastern horizon. Monsoon clouds spolied the view in much of India, reports Debasis Sarkar of the Sky Watchers Association of North Bengal. 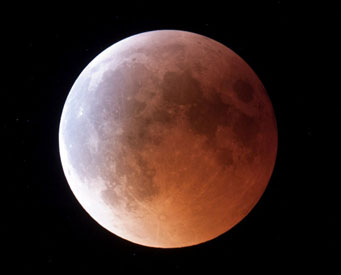 Romanian amateur Laurentiu Alimpie shot the eclipse with a DSLR through a 200-mm f/6 Newtonian. The exposure time was 15 seconds at ISO 800. Click above to see more images.

The Moon's deep plunge through Earth's umbra led to predictions of an especially dark event. Observing from Göreme, Turkey, Tunç Tezel felt it was a really dark eclipse. "I guess the [mid-eclipse] Danjon value was smaller than 1, the ingress edge around 2 ,and egress edge a bit brighter, 2.5."

Observing from near Madrid, Spain, Mark Kidger feels it was the darkest eclipse he's ever seen. "Even if I had had a perfect horizon," he notes, "I very much doubt that the Moon would have been naked eye visible until the sky was almost completely dark."

Kidger continues: "Throughout the predominant colours were deep reddish-brown. Initially the west limb was completely invisible to the naked eye and it did not become easy to see until about 15 minutes before third contact. One interesting aspect was that as totality came to an end, the north and south poles took on a much stronger deep orange tone than the centre of the disk. As the umbra started to withdraw, the contrast between the yellow-white of the thin, uneclipsed arc and the very dark red-brown umbra was stunningly beautiful."

So who wrote this article? At the top, there's a picture of Kelly Beatty, but at the bottom, it says posted by Tony Flanders.

That's exactly correct -- Kelly wrote it and I posted it, with some minor changes. We do that kind of thing for each other all the time. But I changed the name to agree with the photo to avoid confusion.