This might just be the busiest time in living memory for people who love to observe Jupiter. First the plane of its moons pointed edge-on to Earth, allowing remarkable "mutual events" when the moons eclipse and occult each other.

Then, on July 19th, Australian amateur astronomer Anthony Wesley discovered that a comet or asteroid had struck the giant planet, leaving a dark marking that's still clearly visible. This is just the second time in the 400-year history of telescopic observing that such an event has been clearly documented.

And on the night of August 3-4, Jupiter will cover a 6th-magnitude star — a once-in-a-lifetime occurrence for most locations on Earth. The event occurs roughly from 22:53 Universal Time on August 3rd to 1:00 UT August 4th, varying slightly depending on your location. It happens at prime time for stargazers in Europe and Africa, and is also readily visible in the Middle East and Brazil. 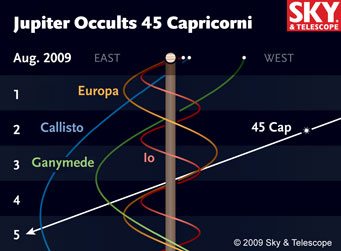 In North America, the occultation can only be seen from New England and the Maritime Provinces — and barely so. In those locations, Jupiter will rise while it's hiding 45 Cap, and will still be extremely low in the sky when the star reappears.

But by amazing good luck, 45 Cap will be masquerading as a fifth moon during a particularly eventful period for Jupiter's Galilean moons. So weather permitting, every telescope owner on Earth will have a chance to see many fascinating events during the days before and after the occultation.

All of these events should be visible through small telescopes if the atmosphere is very steady, but extra aperture and high magnification will improve the views greatly. Try our Javascript utility or our PDF table for details of the moons' interactions with Jupiter. And download a PDF article from the July 2009 issue of Sky & Telescope to see the details of the "mutual events" between the moons.

Aug. 1-2, 10:19 p.m. to 1:48 a.m. PDT, 1:19 to 4:48 a.m. EDT: The first sequence is visible across the Americas. It starts with just three moons visible (not counting 45 Cap), because Ganymede is behind Jupiter. During this period Europa and its shadow pass over Jupiter, Ganymede reappears, and Io disappers.

Aug. 3-4, 22:53 to 4:39 UT, Jupiter rise to 12:39 a.m. EDT: This is the big event. The occultation of 45 Cap is best observed from Europe and Africa, but as you can see in the diagram above, Europa disappears into Jupiter's shadow while the star is hidden, and Io disappears shortly after the star reappears. By 4:39 UT (12:39 a.m. EDT or 9:39 PDT), all three have reappeared from behind Jupiter, but they're still spectacularly close to Jupiter and each other.

Aug. 5, 14:38 to 23:05 UT: A very long sequence of events, best viewed in the Middle East and eastern Africa, but with parts visible across Eurasia and Oceania. A transit of Ganymede and its shadow overlapping a transit of Europa and its shadow, with Io disappearing and reappearing toward the end of the sequence.

Going left to right you should see Jupiter, Io, Europa, Ganymede, and then Callisto, but Io is washed out in this 1 minute exposure.