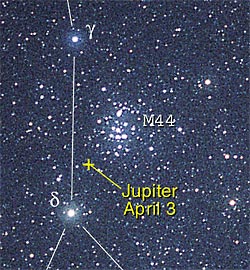 Here is a fine binocular sight that's really a two-for-one: a bright open cluster and a chance to watch the workings of the celestial clock. The cluster in question is M44, a swarm of stars almost 600 light-years away in the constellation Cancer, the Crab, known as the Beehive. As it happens, in March and April 2003 it couldn’t be easier to identify, since Jupiter is gleaming away just east of the cluster.

M44 is one of the binocular sky’s best sights, a loose gathering of nearly two dozen bright stars and a smattering of fainter ones. From mid-February to the end of May, the binocular field will also include brilliant Jupiter. If you follow the planet’s progress from night to night, you will see the planet’s retrograde (east to west) motion halt on April 3rd and, after about a day, see its direct (west to east) motion begin.

Although this dance involves Jupiter and M44, its actual cause has little to do with either. The giant planet’s apparent reversal of direction is simply the result of a change in perspective. When the Earth is near a point in its orbit where the Sun, Earth, and Jupiter form a 90° angle (quadrature), the giant planet performs its slow, silent reversal against the background stars.