A beautiful waning crescent Moon slid in front of Jupiter and its Galilean satellites on July 15th, an occultation widely seen in Europe before dawn.

If Astronomers Without Borders has taught me anything, it's that the world is full of skywatching enthusiasts who definitely know which end of a telescope is which. And it's a good thing too, because those of us in North America were completely sidelined when the waning crescent Moon slid across Jupiter and its four Galilean satellites on July 15th. 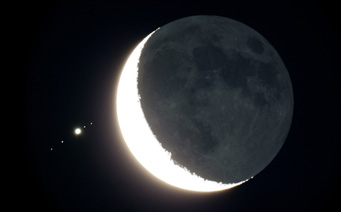 Observing with an 8-inch Schmidt-Cassegrain from Bacau, Romania, Vlad Dumitrescu captured the Moon as it approached Jupiter and its four Galilean satellites on July 15, 2012. "Warm damp night, 24° C, mosquitoes, and totally worth it," he comments. Click here for a larger view.

According to celestial sleuth Jean Meeus, this was the second of a series of 10 meetings of the Moon and Jupiter that extend through next February — but Sunday's merger was the only one that'll be visible from Europe. Thankfully, plenty of amateurs there were ready for it.

The event began about 1:30 Universal Time at its western limit, which made for perfect predawn placement across much of the continent. Tora Greve observed the occultation in a bathrobe and slippers from the sidewalk outside her apartment building in Limhamn, Sweden. "It was a little street astronomy," she notes, as she let early-rising workers have a peek at the scene through her small telescope.

You'll find some great commentary and images on Maurice Toet's Dutch Deep Sky website. He went to bed early — forced to sleep on the couch by his wife! — and set the alarm clock for 2 a.m. When it went off, he peeked outside only to find that it was raining! But the forecast had predicted clearing skies, and that's what happened as dawn approached. "There were too many clouds to completely witness the start of occultation," he notes, "but luckily for me, the final patches of clouds disappeared, so I was able to observe (and photograph) the rest of the event." 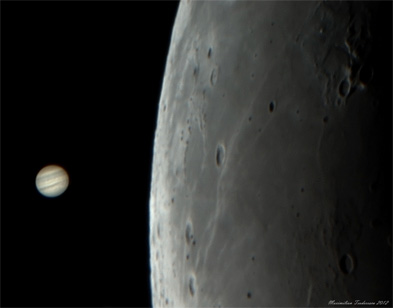 The Moon and Jupiter are nearly touching in this close-up on July 15, 2012. It's a composite of 15 images taken with an 11-inch Schmidt-Cassegrain telescope and an Imaging Source DBK 41AU02.AS camera. Click on the image for a larger view.

In Romania, graduate student Max Teodorescu went all out. After loading the car with gear, he and his wife headed south to the village of Ilfov, on the outskirts of Bucharest, to watch the event. You can see one of his closeups here, but check out his website (translated to English) for the amazing sequences he captured with an 80-mm refractor and a Celestron 11-inch Schmidt-Cassegrain.

"Jupiter's reappearance at 5:08 a.m. deep in dawn's twilight was quite a spectacle from 1250 meters high," reports Mike Kentrianakis, who observed from near the event's centerline in eastern Crete. "No photographs were taken during the 1 minute reappearance, but it was thoroughly enjoyed with the naked eye." 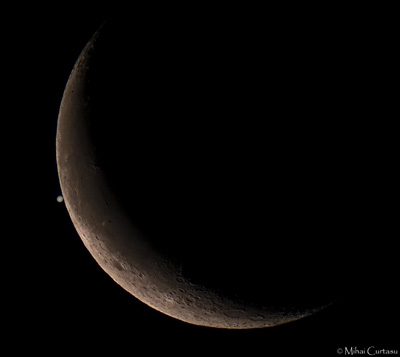 The Moon and Jupiter seemingly kiss in this view of July 15th's occultation. Mihai Curtasu used a Canon 550D camera attached to a Vixen 60-mm f/11 reflector on a tripod. Click on the image for a larger view.

Some great shots have also been posted in S&T.com's online image gallery. I love the richness and realism of the view captured from Fundulea, Romania, by Mihai Curtasu with relatively simple equipment. He notes, "It was an absolute show seeing these spectacular objects so, so close together. The emergence was also great to see, although there was by that time a lot of light, as it was close to sunrise."

As might be expected, this was a made-for-video kind of event. Depending on location, it took 1 to 2 minutes to slide across the King of Planet's 35-arcsecon-wide disk. And because the Moon showed such a thin crescent, the brightness of its sunlit limb was subdued and well matched to that of Jupiter. You'll find a rich assortment of videos posted on YouTube. (Be mindful: some are just simulations.) I especially liked the rock-steady, high-magnification clip of Jupiter's disappearance uploaded by Ivan Osychenko.

The occultation was a daylight event for locations eastward of a line from Estonia through Saudi Arabia. I haven't turned up any reports of successful daylight observations, but if you made one or know of one, please mention it in a comment below.

When can we view this in USA?
Secifically 40 degree lat ?
Thanks

I saw the occultation from Denmark. Denmark is a small country and was just at the limit of the occultatios northeren visibility, and from where I live, Jupiter and its moons disappeared for 20 minutes behind the Moon's northpole. Farther north in Denmark it was a grazing occultation, so my friends there could see half of Jupiter sticking up above the Moon's rim.

From Ireland there was no occultation of Jupiter on July 15,
we had a close graze event instead, with Jupiter passing just N of the lunar disk. Nevertheless it was worth waiting up for, closest approach was at 02:04 UT at Dublin (03:04 local summer time) which I observed in 20x60 binoculars. I was fortunate to have had a clear sky as many observers were clouded out here. Venus was brilliant low on the horizon and Aldeberan could also be seen in a brightening sky, one hour before local sunrise. I was doubly fortunate in that there was a power outage just after closest approach which doused all the street lights!

Vlad's photo was captured with an SCT 8 " (large field)?