When most of us look at Jupiter through a telescope, we're content to see a few of the planet's dusky bands, its Great Red Spot, and the pinpoint sparkle of its four Galilean satellites. 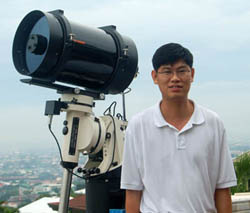 From his home in Cebu City, Phillipines, Christopher Go uses this Celestron C11 telescope to take remarkable images of the solar system.

But not Christopher Go. Armed with his Celestron C11 scope, Astrophysics AP900GTO mount, and Imaging Source DMK21BF04 camera, he prowls the solar system for photoworthy prey and usually finds it. I don't know if there's something about the air over Cebu City in the Phillipines, where he lives, or something in the drinking water, but Go is among the world's elite when it comes to planetary photography.

As evidence, I submit the sequence shown below. On August 16th, from 16:38 to 17:39 Universal Time, Go carefully recorded the passage of little Io past big-brother Ganymede — and a transit of Io's shadow across the larger moon's disk. Note that the two moons are not only resolved, but also that detail is apparent on their surfaces!

"I discovered this event 2 weeks ago while playing with WinJUPOS," Go tells me. "For
this event, I used a green filter and recorded in monochrome. There was no time for RGB integration. I also couldn't use a color cam as Jupiter was too low and atmospheric dispersion would be a problem. Each frame is a product of a 30-second video integration. The setup is the same as when I'm imaging Jupiter — in fact, I imaged the planet in between the transits (except during the shadow part)."

Ordinarily, these moons would not appear so close together. But right now we're enjoying a long sequence of such mutual phenomena because Jupiter passed through an equinox on June 22nd, which makes the orbits of the Galilean satellites appear edge-on from the Sun's perspective. This occurs every six years. It also helps that Jupiter reached opposition on August 14th, placing it especially close to Earth.

Coincidentally, the geometric conditions are much the same on Saturn, which had its "spring equinox" on August 12th. However, right now Saturn is hopelessly lost in the Sun's glare, so it's up to NASA's Cassini orbiter to show us all the interesting comings and goings that are taking place on and around that wonderfully ringed planet.

Where is the "sequence shown below"?

Funny. It appeared right after I posted. 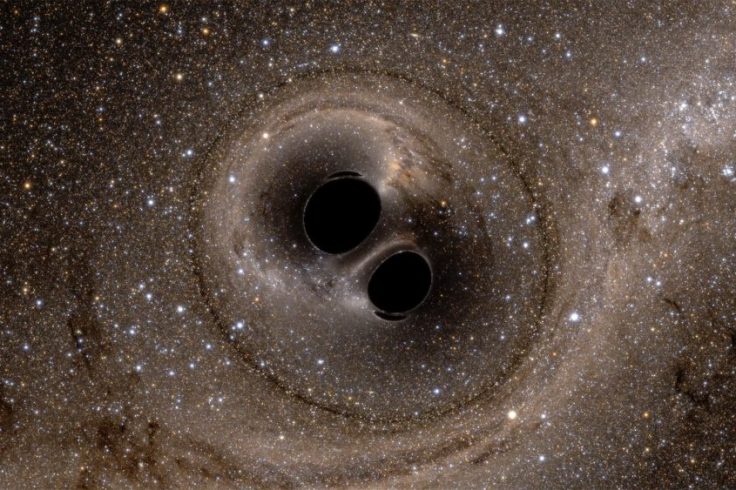