Mars is one of the half dozen swiftest-moving objects in the sky — not counting the occasional near-Earth asteroid or comet. Except when it’s closest to Earth, Mars moves through the stars at roughly 1.4? per hour, or ½° per day. So it’s possible — though challenging — to track the planet’s progress from one night to the next with your unaided eyes.

But if you want to see Mars move during a single observing session, you’ll need a telescope, or at the very least binoculars. 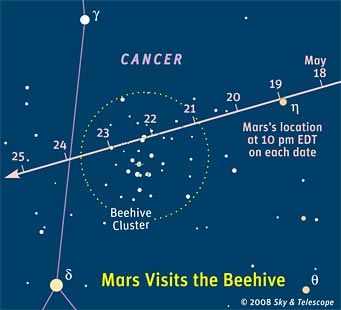 Click above for a full-page, printable version of this chart.

A planet’s motion is easiest to see when there’s a bright star very nearby to provide a frame of reference. Stargazers in far-western Europe and Africa and the easternmost sections of the Americas had such an opportunity on the night of May 19–20, when Mars passed just north of the 5.3-magnitude Eta Cancri. The planet was less than 3? from the star from 8:00 to 9:30 p.m. EDT on May 19th (0:00 to 1:30 May 20th Universal Time).

Circumstances are even better three nights later, when Mars plunges into Messier 44, the Beehive — a whole cluster of stars! A particularly close encounter is viewable low in the sky from America’s West Coast around 11:30 p.m. PDT on May 22nd, with Mars less than 1? south of 6.4-magnitude 39 Cancri. A half hour later, the planet is directly between this star and its nearby 6.6-magnitude companion. Click here for a full-page, printable chart showing Mars's track through the Beehive.

Western Europe and Africa and the easternmost Americas are again favored for the closest approach of all, at 9:00 p.m. EDT on May 23rd (1:00 UT May 24th). That’s when you’ll find the planet’s center about 16? — just 3 Mars diameters — north of a 6.9-magnitude star. If you look carefully, you should be able to track the planet’s motion almost continuously as it traverses 1.4? every minute — moving its own diameter every 3½ minutes.

But wherever you’re viewing from, even if you miss these spectacularly close conjunctions, Mars’s passage through the Beehive will be an event you’ll never forget.

I like this version of the finder chart better than some of the other ones that you have used.

Mars slightly north of Eta Cancri was a beautiful sight in my 11 x 80 binos with the beehive nearby.

Last night when I looked at Mars through my 10x50 binoculars, I could immediately see the Beehive right next to it, just the way it looks on the chart. The cluster was a very easy target tonight; perfect to show it to my mom for the very first time. And that's just what I did. She loved it too!

Since M44 is my favorite Messier, this has been top priority. Have viewed a couple times with my 15x70 LW Garrett Optical Bino's and have blown away. Expect clouds Thursday, so I may miss the actual "occultation".

Looked at it tonight between thunderstorms and it looked fantastic. Use a 80mm refractor using a 32mm and 25mm eyepiece. The transparency was good, but the seeing was real turbulent.

It was really a nice event to watch through binoculars. I also took it's picture using my canon camera. Here is the pic!