While skywatchers have been fixated by the dramatic pairing of Venus and Jupiter in the west after sunset, another bright planet has been making its entrance over in the east. It's Mars, which reached opposition on March 3rd and was nearest Earth on March 5th. This means that even as Jupiter gradually exits stage left over the next few weeks, Mars remains conveniently in view all night long.

Compared to its showings in some other years, the Red Planet's performance in 2012 is understated. This is the most distant in the planet's 15.8-year-long cycle of oppositions. Mars appear only 13.9 arcseconds (13.9″) across even at its closest in early March, a far cry from the 25″ of the record-setting opposition of 2003. The next similarly close approach won't come until 2018. 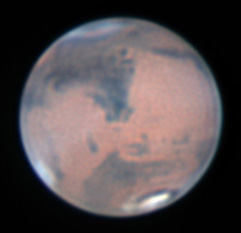 Mars as captured with a 12.5-inch telescope and stacked-video imaging on the night of March 5th from Manchester, New Hampshire. Don't expect visual views to look this good! South is up. The dark feature just above center is Syrtis Major. Ice clouds are visible in Hellas at top, as well as over Elysium at lower left. Note the brownish dust clouds just left of the North Polar Cap at bottom.

But astronomy is all about making the most of distant, difficult views. With a good, well-collimated 4-inch or larger telescope on a night of excellent steady seeing, you can glimpse many of this planet's remarkably Earthlike aspects — polar caps, changing white clouds, and surface markings that reveal a rotation period of just over 24 hours.

This season the planet's northern hemisphere is tipped far into our view, showing us the brilliant white North Polar Cap. The cap is shrinking as spring gives way to summer in the Martian northern hemisphere. Look for the narrow dark collar that becomes exposed right around the shrinking cap. The major dark surface markings (albedo markings) depend on which side of Mars is facing Earth when you look.

Remember to give your telescope plenty of time to cool to the temperature of the nighttime air. Devote lots of time to watching in order to catch fleeting glimpses of detail! Every bit of what you see will be a hard-won prize.

Use this map to find the names of Martian surface features you see. (Most telescopes will show only the largest dark regions.) The globes are tipped correctly for the current apparition. Each globe displays the central-meridian longitude directly below it on the map. South is up. Click on the image for a larger version.

It's one thing to detect a tiny, vague smudge or two on Mars's little disk. The smudges become much more exciting if you can identify and name them and mark their comings and goings on subsequent nights. The Mars map here allows you to identify features by referring to the globes just above it.

To find which side of Mars is facing Earth at the time you observe, you'll need to find the longitude of the planet's central meridian (CM), the line running pole-to-pole through the center of the disk. One good way is to use our free Mars Profiler. Then, find this longitude along the bottom of the map. Features near this part of the map will be facing you on Mars's disk.

At each apparition, the Mars Section of the Association of Lunar and Planetary Observers receives many observations and images. Also see the latest updates from the International MarsWatch and the International Society of the Mars Observers at mars.dti.ne.jp/~cmo/ISMO.html. These have more information on observing and imaging the planet, what's happening as this apparition proceeds, and recent images from observers worldwide.

Speaking of images, if you've got nice ones to share, please consider uploading them to our online Photo Gallery!