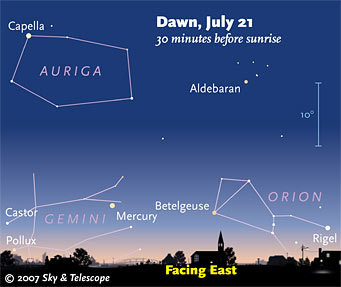 Mercury lies a fist-width above the north-northeast horizon as the sky grows bright. The planet hangs in nearly the same spot for the remainder of July, but every morning the stars move a little bit up and to the right.

Not everyone has the fortitude to be up and about before dawn on July mornings. But if you can get to a place with an unobstructed eastern horizon as the sky grows light, you'll witness a wonderful scene.

High in the east, ruddy Aldebaran, anchor of the Hyades star cluster, fades as the morning light gathers. Well to its north, Capella, the Goat Star, shines just a little brighter. Looking along the horizon halfway between these two beacons, you should spot Mercury, the innermost planet, buried well inside the bright band of light that hugs the horizon. To Mercury's right, Orion, brightest of constellations, lifts slowly into the sky.

Mercury reaches greatest elongation — its maximum angular separation from the Sun — on July 20th. But this event has little practical significance. In fact, the planet hangs in nearly the same spot in the morning sky from July 18–30. After that, it starts to plunge toward the Sun, becoming invisible some time in early August.

On July 18th the innermost planet is relatively faint and hard to spot at magnitude 0.6, roughly the same as Betelgeuse to its right. But it's quite a sight through a telescope — a thin crescent more than 8" from horn to horn. By the 30th it's brightened to magnitude -0.8, far outshining any of Orion's stars. However, the view through the telescope is less interesting, with the planet shrunk to 6" and a fat gibbous phase of 70%.

Mercury is most gratifying if you can observe it on several days in succession, because it changes more rapidly than any other major celestial object besides the Moon.

If your schedule doesn't permit you to observe Mercury this July, this planet will have an even better morning apparition in early November, with exceptionally favorable circumstances for observers in the Northern Hemisphere.

Will mercury be visble in tenn????

As long as the weather is good and there are no trees or buildings or anything like that in your way, sure you can see it in Tennessee. To me, it looks just slightly pinkish/white. Check it out!

I was wondering if mercury will be visible in California?? In the Bay area?

I was wondering if mercury will be visible in California?

Yes, all of our astronomical forecasts are valid throughout mid-northern latitudes unless we say otherwise. That means anywhere in the 48 states and southern Canada, anywhere in Europe except Scandinavia and northern Russia, and most of Asia.

Our diagrams show the sky as it appears at latitude 40° N, longitude 90° W., near the proverbial Peoria, Illinois. Longitude is almost irrelevant. With a few exceptions, any sky scene that happens at (say) 9 p.m. Eastern time is repeated nearly unchanged when it happens 3 hours later at 9 p.m. Pacific time. The most important exceptions are events involving the Moon, which moves a significant distance across the sky in three hours. So eclipses and occultations are always longitude-dependent.

Latitude does make a significant difference, but fortunately the 48 states cover a pretty small range of latitudes. At least 95% of the people in the U.S. and Canada live within 12° of latitude 40° N. The only important exceptions are southern Florida and the Canadian prairies.

Catch the Quadrantids in Moonlight