Mercury and Mars appear spectacularly close to each other shortly after sunset on February 7th and 8th. This is a rare opportunity to see the two smallest planets together in a single telescopic field of view. 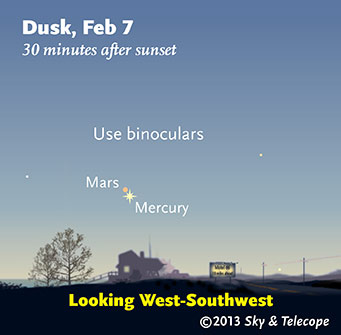 Mars appears less than 1° upper left of much brighter Mercury low in the west-southwest after sunset on February 7th.

This is fairly early in Mercury's fine evening apparition; it will be considerably higher a week later. But as long as the air is clear and your location has an unobstructed view to the west, you should have no trouble spotting Mercury a half hour after sunset as a tiny pinprick of light in the bright glow. Mars is only one-tenth as bright and may require binoculars or a telescope.

Mars is about ¾° upper left of Mercury on the 7th and less than ½° lower left of Mercury on the 8th. That means that they should fit in a single telescopic field of view at 80× on the 7th and more than 100× on the 8th. That's enough magnification to see both planets' tiny disks assuming that you catch them early, while they're still relatively high, and that the atmosphere is steady.

Mars appears just 4" across and almost perfectly round, while Mercury is a gibbous shape about 80% illuminated and 5.8" tall. Mars is actually bigger than Mercury, but it appears smaller because it's farther away — almost on the opposite side of the Sun from Earth. See our SkyWeek video for more information on Mercury and Mars.

I saw it today with binoculars 6;30pm at Chihuahua,Chih. Mexico