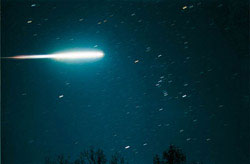 At St. George, Kansas, Rick Schmidt captured this Leonid as it flared with the brightness of the full Moon at about 1:45 CST on November 17, 1998. Orion is to the fireball's immediate right.

The weak, long-lasting Taurid meteor shower produces up to 8 or 10 meteors per hour throughout early and mid-November. Rates of 3 or 4 an hour can be seen from late October through November’s end.

The Taurids are unusual in that as many meteors can be seen in the evening as in the morning, since the shower’s radiant, about 5° south of the Pleiades, is fairly high all night. The higher a shower’s radiant, the more meteors appear everywhere in the sky.

The meteors are debris from periodic comet 2P/Encke. They are the slowest of any major shower’s, encountering Earth at only 28 kilometers per second. “The Taurid stream is noted for its many brightly colored meteors,” writes Jeff Wood in WGN, the newsletter of the International Meteor Organization. “Although the dominant color is yellow, many orange, green, red, and blue fireballs have been recorded.” 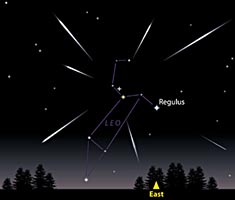 The cometary crumbs that create Leonid meteors are traveling together through space, along the orbit of Comet Tempel-Tuttle. So even though they can appear anywhere in the sky, they all seem to emanate from a spot in the constellation Leo. But in mid-November this constellation does not rise above the horizon until after midnight (this view is for 1 a.m. local time), so large numbers of meteors will not be seen until Leo rises.

The much more famous Leonids are expected to peak on Wednesday morning, November 17th, well after the crescent Moon has set. But we are now well past the 1999–2002 period, when observers in some parts of the world witnessed very strong, even storm-level activity from this shower. This year, no more than 15 to 20 meteors per hour are likely under even the best conditions. Despite their low numbers, Leonids tend to be bright and leave persistent trains.

The Leonids travel in the 33-year orbit of periodic comet 55P/Tempel-Tuttle, which passed through perihelion in 1998 and is now on its way back to deep space. Great Leonid storms were witnessed in the years 1833 and 1966.

Use our interactive sky chart to see the appearance of the sky at 2:00 a.m. during the peak morning of the
Leonids.
On the chart, which is is set for 40° north latitude, the meteor shower name and symbol is visible in both windows. Click on the "change" button to alter either the date and time or viewing location displayed by the chart.