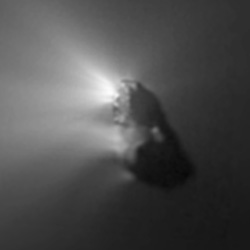 The Giotto spacecraft flew within 600 kilometers of Comet Halley's active nucleus on March 13, 1986, during the comet's most recent pass through the inner Solar System. Debris from the nucleus can be seen as Orionid meteors every October and Eta Aquarid meteors every May.

This is a fairly good year for observing the annual Orionid meteor shower, whose maximum generally lasts from around October 20th to 26th. During this period in 2004 the Moon waxes from first quarter to almost full, but it sets early enough to leave some dark-sky viewing time each morning before dawn, when the shower is most active.

At its height this shower produces 15 swift meteors per hour under ideal conditions. The shower has several radiants in an area centered just north of Betelgeuse during the dates of maximum. “At 66 kilometers per second, Orionids appear as fast streaks,” write David Levy and Stephen Edberg in Observe: Meteors, an Astronomical League manual. “They are faster by a hair than their sisters, the Eta Aquarids” (of May).

A few Orionids may appear as early as the start of October and as late as the first week of November. The brightest meteors tend to leave long-lasting trains.

Use our interactive sky chart to see the appearance of the sky at 2:00 a.m. daylight-saving time (from 40° north latitude) during the peak morning of the
Orionid meteor shower.
On the chart, the shower name and symbol are visible in both windows. Click on the "change" button to alter either the date and time or viewing location displayed by the chart.

Although not a strong or spectacular shower, the Orionids have one significant claim to fame: the particles come from the reigning king of comets, Halley. Earth passes near the long, looping orbit of Comet Halley twice per year, and each approach peppers our atmosphere with dust strewn along Halley's orbit. Yet, despite their impressive lineage, the Orionids in October (and the Eta Aquarids in May) are not particularly well known.