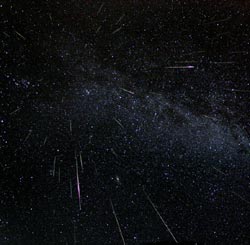 This composite image by Fred Bruenjes used 59 exposures (out of 680) taken during a six-hour period on August 11–12, 2004. He piggybacked his Canon 1D Mark II digital camera (set to ISO 3200) and a 17-mm lens on an 8-inch LX200; each exposure was 30-seconds long. He then combined the shots containing meteors to create this composite. There are 51 meteors in the large image, including one point-source meteor.

This is an exciting time to be a meteor observer. Scientists have long known that a meteor shower occurs when the Earth passes through the trail of debris strewn behind a comet as it orbits the Sun, but until a few years ago they could only guess what would happen during any given shower. Skilled observers would note unexpected outbursts and lulls, but nobody knew how to use that data. Now, experts in orbital dynamics have started to analyze the fine structure of these cometary debris trails and predict fluctuations in meteor activity with extraordinary accuracy. There are still plenty of surprises, but as the predictions become more accurate, departures from these forecasts become more meaningful.

The most spectacular vindication of the new meteor science came with the Leonid showers of 1999 and 2001, when several experts forecast brief outbursts near or above storm levels (1,000 meteors per hour) at specific times. The 1999 predictions proved to be so accurate that many people flew halfway around the world on the strength of the 2001 forecasts. It was money well spent; a full-fledged meteor storm and a distinct near-storm arrived almost precisely on schedule in one of the most extraordinary meteor showers on record.

Now meteor prediction has scored another success. Esko Lyytinen of Finland and Tom Van Flandern of Washington, DC, forecast an unusually brief and intense peak in the 2004 Perseids due to a filament of debris cast off when Comet Swift-Tuttle swept by the Sun in 1862. They also predicted that the normal peak of this shower would be stronger than usual due to a 12-year resonance with Jupiter’s orbit.

Preliminary analysis of data from 107 observers in 27 countries by Rainer Arlt of the International Meteor Organization confirm both of those predictions. Indeed, the sharp peak apparently arrived just two minutes late, at 20h 56m Universal Time on August 11th, give or take four minutes. For 20 minutes, the zenithal hour rate remained above 170 — about twice the normal peak count, and three times the value expected so early in the shower. The standard broad Perseid peak occurred from 9h to 17h UT on August 12, and it was indeed significantly stronger than usual, as forecast.

The sharp peak occurred during daylight hours for observers in the Americas, but skywatchers in Europe and western Asia were ideally placed to see it. Lyytinen and Van Flandern forecast that most of the meteors would be faint; in fact, many observers commented on the extraordinary number of bright meteors. Marco Langbroek of Leiden, the Netherlands, said that it was the best Perseid show he had seen since 1993, despite the fact that the peak occurred during twilight. Observing the conventional peak 12 hours later near Ukiah, California, Bill Smith also noted an abnormally large number of very bright meteors, with the magnitude of the brightest at –7. So perhaps the bright meteors were due to Jupiter’s enhancement of normal activity, and the sharp peak was faint after all. It will be a long time before the dynamics of meteor showers are fully understood!