The article below was written in mid-December. I've left it unchanged, though two readers justifiably reproached me for describing Comet Holmes as "blazing away." Truth be told, "blazing" is appropriate for a star, but not for something as diffuse as Comet Holmes.

If you don't want to read the whole article, click here to download a finder chart for 8P/Tuttle, and here for Comet Holmes. 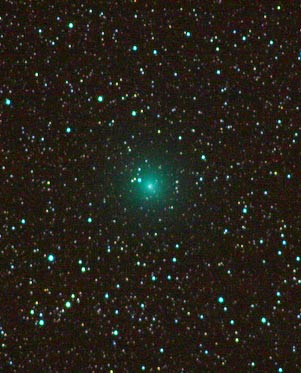 At first glance, both Comet Holmes and 8P/Tuttle look like circular blobs of light. Here's Tuttle on December 25, 2007.

As the year 2008 opens, Holmes is still estimated to be magnitude 3.5 — nearly as bright as at its first outburst. But that light is spread out over roughly ten times the area of sky covered by the full Moon, giving it a fairly low surface brightness. So while Holmes is quite striking under pristine dark skies, it's difficult to see from typical suburban locations.

Meanwhile, Comet 8P/Tuttle has brightened dramatically in the past two weeks. It was estimated to be magnitude 6.0 or brighter at the end of December — just one-tenth the overall brightness of Holmes. However, it's fairly small and concentrated, making it an easy telescopic target in all but the worst skies. But you're likely to need fairly dark skies to see this comet through small binoculars or with just your unaided eyes.

Regardless of how dark your skies are and what instruments you use, both comets are now definitely harder to see than M31, the Andromeda Galaxy, but considerably easier than M33.

With Comet Holmes still blazing away nearly as bright as ever, it's easy to forget that another bright comet is crossing the far-northern sky. 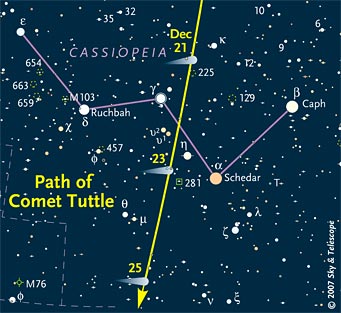 Comet 8P/Tuttle was approaching its maximum brightness as it crossed Cassiopeia in the next-to-last week of December. Click above for a printable PDF chart.

Although no match for Holmes, Comet 8P/Tuttle is now visible through 10×50 binoculars under dark skies. A telescope may be required in the suburbs.

To help you find the comet, we have prepared two printable finder charts in PDF format. Comet positions on both charts are shown for 0h in Universal Time — equal to 7 p.m. on the preceding date in Eastern Standard Time.

Click here to see the comet's path before Dec. 25.

Click here for a chart covering late December and all of January. 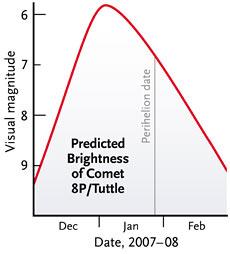 The comet is predicted to peak in brightness around the New Year, as shown at right. And recent magnitude estimates indicate that the predictions are pretty much on target.

So far, the comet appears to be a modest-sized, medium-faint circular blob. But comets are famously unpredictable, as Holmes has just demonstrated in the most dramatic fashion. So Comet Tuttle bears watching too, despite its current rather bland appearance. Nobody can predict when or if it will sprout a tail — or even undergo a dramatic outburst like Comet Holmes.

Tuttle moves across the sky at a fairly sedate pace in early December, but it picks up speed as it makes its closest approach the Earth — just 23.5 million miles away — on New Year's Day. Despite the full Moon, the comet should be a fairly easy target by the time it crosses the W of Cassiopeia from December 20-25. And around 0h UT on December 31st (7 p.m. Dec. 30 EST), the comet passes through the outer edge of Messier 33, the Triangulum Galaxy. (Think photo-op!)

The comet moves south quite rapidly during January, passing through Pisces, Cetus, Fornax, and then into the southern reaches of Eridanus. It will become a challenging target for northern observers around the middle of the month, when it's swallowed in the glow of the first-quarter Moon.

For more information on Comet Tuttle, see the January issue of Sky & Telescope. And don't miss the sidebar on the checkered career of Horace Tuttle: comet hunter, war hero, and embezzler.

How is it that you can claim that comet Holmes is blazing almost as bright as ever? Have you looked lately? I think it would be a good idea to include a date in the text about any transient event.

To be fair, Stephen, Tony's blog post is dated at the very end (December 12, 2007). That said, I have to agree that the use of the term "blazing away", to describe 17P/Holmes as at 12th December, must class as artistic licence.

Again, based upon the 12th December date, to say that a telescope "may be required" to view 8P/Tuttle from the suburbs is surely the understatement of the year! People with 8 inch scopes have been struggling, from the information I have read, and the only really successful ones were capturing the object on CCD images.

I'm all for encouraging people to go out and observe, but I believe it is important to give people realistic expectations - especially those new to the hobby.

I amin Barbados and shortly after the New ayear arrived, we saw 2 very bright red orbs that appeared to be comets. Does anyone have any information on this? No one here seems to know anything about it.

Sorry, don't know about the red orbs. Just Mars, which is quite exciting desopite not having a great planetary scope to maximize the view [Santa did not bring me the Mewlon 250 I requested...I was NOT a good boy, however::))]

These moments as a stargazer are momentary, precious, and fleeting. To me, magical.

I get chills thinking of the Venus transit in 2012, knowing I will (hopefully) witness an event never again to be seen by any livng person, with the next transits of Venus in December 2117 and December 2125.

Wow. How cool is that?

I am not an expert in this matter, but I enjoyed Holmes very much. I started with a Zeiss 10x40 binoculars, and I was so amazed that I got out my 70mm goto Meade and it was beautiful. Moments like this are to be treasured for a lifetime. thank you very much, clear skies
enrique

I have given up observing this comet. A week ago I tried to refind it to no avail from here in San Diego.I still remember getting up around 2am and going out to look for it when if first flared up. By that time it was high up at the zenith and visible to the naked eye. The view thru 10 X 50 binoculars was breath-taking!! Never to be forgotten.