French astrophotographer Thierry Legault captured an image of the razor-thin lunar crescent precisely at the moment of this month's New Moon.

There's always something of a spirited global competition to be first to spot the New Moon of Ramadan — this year celestial geometry favored the Southern Hemisphere — and sightings came in from many countries yesterday evening, by which time the Moon was a slam-dunk 25 to 40 hours old. With that, Muslims around the world begin their solemn month-long observance. 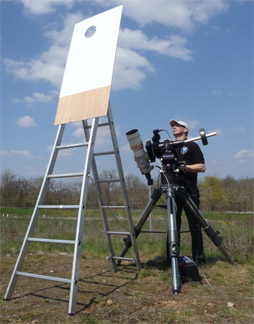 But astrophotographer Thierry Legault went all-out to record the razor-thin lunar crescent exactly at the moment of New Moon — on July 8th at 7:14 Universal Time. He succeeded, but it wasn't easy.

Legault set up for his audacious attempt in the Parisian suburb of Élancourt, France. The Sun was well up in the late-morning sky, with the Moon 4.4° (nine solar diameters) to its south. He built the special screen seen in the photo at right, so that no sunlight would enter the telescope directly. He also used a near-infrared filter to reduce the sky's overwhelming brightness relative to that of the lunar crescent, which was only a few arcseconds thick.

"This requires a good mastery of the equipment and processing because the crescent is extremely faint, even with all precautions," Legault explains. "I could not see the Moon on the computer during recording — only after image stacking (to increase signal-to-noise ratio) and processing like brightness/contrast adjustment (to remove the glare from the Sun)." 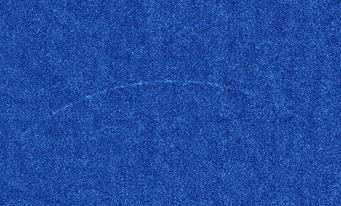 It took a lot of image stacking and processing, but here is Thierry Legault's near-infrared image of the extremely thin lunar crescent captured at the moment of New Moon on July 8, 2013. Click here for a larger view.

Read more about this incredible effort on Legault's website. It's the same approach he used to capture the New Moon of April 14, 2010, which involved a slightly greater separation of the two disks. (Technically, the closest New Moon that can be seen — in silhouette — occurs during a total solar eclipse.)

Thanks to a comment posted on Sky & Telescope's Facebook page, I should point out that a trio of German amateur observers at the Munich Public Observatory have a particular fascination with very thin lunar crescents. In particular, Martin Elsässer, recorded one on April 21, 2012, that was very slightly closer than Legault's. Did Elsässer succeed? You'll have to watch his video clip and judge for yourself.

By the way, seeking very young crescent Moons is great sport if you've got an unobstructed western horizon. But it takes planning to succeed. If conditions are right, you can usually glimpse a 17-hour-old Moon with a small telescope and a 20-hour Moon by eye. The youngest Moon ever seen with optical aid was just 11h 40m past new, and the record for the unaided eye is 15h 32m.

What's the youngest Moon that you can recall seeing? Add a comment below to let me know.

Awesome! Now that someone has captured a moon with "zero" age, the target to beat will have to be angular elongation. Since the Moon moves half a degree in an hour, the Moon at an elongation of 4.4 degrees would be equivalent to a Moon with an age of about 8 hours (equivalent for the case when the Moon's ecliptic latitude is zero).

Thierry is the man! I love his astrophotos.

Our club record (Elliot Lake Astronomy Club) has a record of 23.5 hour-old crescent moon. Jim Reckhan holds that record, with the closest competitor at 39 hours. Jim's sighting was in February 2006. I don't know whether that is holding because of difficulty or because of lack of interest.