Eclipse-chasers aboard some ships in the South Pacific saw up to 3½ minutes of totality, while those who'd flocked to Australia experienced a mix of clear skies and clouds. 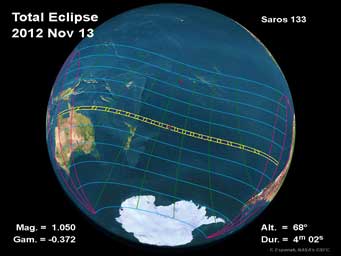 As has often been the case recently, the total solar eclipse on November 13th (Universal Time) occurred over a vast stretch of the South Pacific Ocean that managed to avoid large swaths of land. Hypothetically, someone positioned roughly 1,200 miles (2,000 km) east of New Zealand might have seen totality for just over 4 minutes. Instead, most eclipse chasers flocked to the northeastern corner of Australia or ventured into the South Pacific aboard ships, where the Moon's shadow touched down on the morning of November 14th.

Viewing success or failure depended on the location. Thousands of skywatchers had gathered around the coastal towns of Cairns and Port Douglas, in the hope of viewing totality for 2 minutes. But many of those near the coast were stymied both by the eclipsed Sun's low altitude (14°) and stubborn clouds that hugged the coastline. "Nature chose to be perverse toward the several hundred observers on Wangetty Beach," noted Daniel Fischer in a message to other eclipse enthusiasts. "We saw very slender solar crescents before C2 [second contact] and after C3 [third contact] through cloud holes, yet we missed totality." 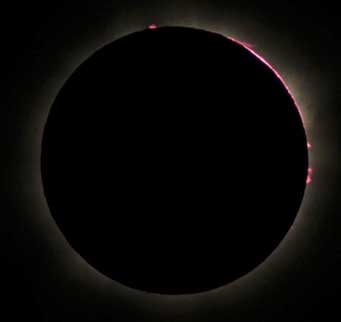 This short exposure by Alson Wong captured a long arc of the crimson-hued chromosphere during the November 13-14 total solar eclipse. Note the prominences along the solar limb at top and right.

Those positioned farther inland — or who dashed away from the coastline in the hours before dawn — fared better. Among them was Greg Bryant, who helped lead the Sky & Telescope Australia land tour. Since Cairns had been forecasted to be cloudy, Greg Bryant and astrophysicist Julia Bryant suggested the day before the eclipse that the tour head inland to Mareeba. They left at 2:30 a.m. in two vans with the tour participants.

"We knew that Mareeba would not see first contact, as the Sun would be just behind the mountain range, but we saw the Sun within minutes of first contact as it poked up," Greg Bryant reports. "As the eclipse progressed, the Sun rose above the mountain-hugging clouds into a great sky, with cloud nowhere near the Sun."

Another group of landlubbers at Wetherby Station endured a thin veneer of high clouds and even some drizzle, reports Gary Seronik, but the eclipsed Sun shone through beautifully. "It was by some margin the most beautiful eclipse I've seen," he says. "With the eclipse happening at sunrise, the Moon illusion was in full effect and so the eclipsed Sun looked HUGE. Really amazing." 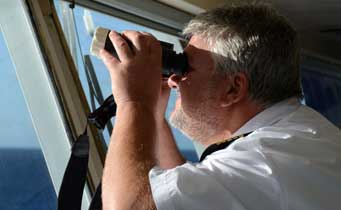 Zisis Taramas, captain of Celebrity Cruise's Millennium, takes a moment to enjoy the eclipse's partial phases (with properly filtered binoculars) in the minutes before totality.

You had to be floating at sea somewhere east of Australia to see the rest of the umbral shadow, which swept across 9,000 miles (14,500 km) over 3.1 hours. Even being a short distance from the coastline proved advantageous. About 175 passengers and crew on the MV Orion, positioned just off Cairns near Green Island, saw a "marvelous corona and chromosphere, shadow bands, and a bright surrounding sky," according to Canadian meteorologist Jay Anderson.

Farther east, the 330-passenger Paul Gauguin had been positioned along the eclipse's path at 166.8° east, 26.7° south. But when clouds approached from the southeast, reports Rick Fienberg, "we turned the ship and let the wind and swells carry us north slightly away from the centerline. It worked — we stayed ahead of the clouds and observed totality (indeed, the entire eclipse) with the Sun in the clear." 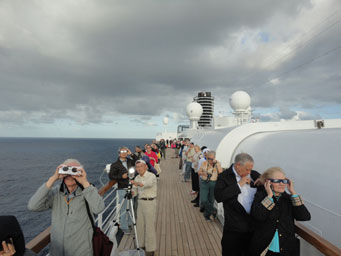 The Oosterdam's 2,000 passengers crowded her decks as the eclipse's start time approached. Eclipse shades in place, all were hoping for clear skies; instead, the passengers were able to view the eclipse with the unaided eye for a few seconds at a time as the eclipsed Sun peered through the clouds.

Totality was a grand sight for the 2,200 passengers and 960 crew members aboard the Celebrity Millennium, whose captain and navigator had settled on a track along the centerline that was intercepted by the Moon's shadow at 176.5° east, 31.7° south. A weather front had passed through the rendezvous area the previous day, leaving behind calm seas and gentle winds that made it easy to follow the eclipse's progression. Many on the ship hadn't realized that they'd witness an eclipse when they boarded in Honolulu a week earlier, but the event drew everyone out onto the open decks topside (including virtually all of the crew). 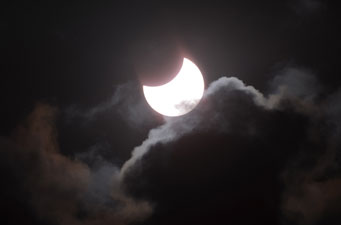 Dave McCarter, part of the S&T tour group aboard the Oosterdam, captured the partial eclipse through dramatic cloud cover.

The 2,000 passengers aboard the Oosterdam, 100 of whom had come along with a Sky & Telescope tour group, saw the eclipse through partial cloud cover. Observing the eclipse at a spot about halfway between the east coast of Australia and the island of New Caledonia, the group found clear skies an hour before the eclipse only to have the 15 minutes following first contact completely clouded out. Fortunately, as the eclipse progressed, the eclipsed Sun peeked out through patches of clear sky.

"The view was quite stunning through thin clouds," reports S&T Editor in Chief Robert Naeye. "The clouds had the pleasant effect of making it safe to view the eclipsed Sun directly for a few seconds." 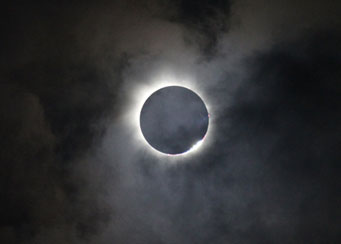 Audie Hickey, a passenger aboard the Oosterdam with the S&T tour group, captured this view of the eclipse through an opening in the clouds.

Just before second contact, the Sun moved into a small hole in the clouds. "Looking naked eye without a filter, I saw several intense Baily’s Beads and a glorious Diamond Ring," says Naeye, "and then a cheer went up among the passengers on the Oosterdam as we saw the totally eclipsed Sun through a hole in the clouds. The hole was quite fortuitous given that the sky was nearly totally clouded over."

Though the clouds weakened the view of the solar corona, Oosterdam passengers enjoyed approximately 1 minute of breathtaking views of totality, ringed by a sunlit horizon. A brilliant Venus shone 20° west of the eclipsed Sun. Third to fourth contact continued in clear skies.

Likely no one else was positioned in the umbral path after the Moon's shadow raced past the ships. Totality ended at sunset roughly 500 miles west of Chile. It was the first total solar eclipse in nearly 1½ years. The next one is less than a year away — on November 3, 2013. 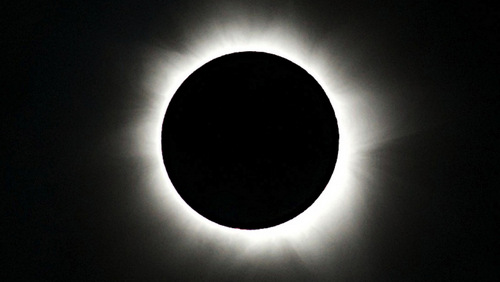 The solar-maximum corona was rich with detail during the total eclipse on November 13-14, 2012. Phil Wherry, a member of Sky & Telescope's cruise eclipse tour took this photo from aboard the Oosterdam.

For those of you who were able to see the eclipse, share your photos on our online photo gallery or post your observer's reports as comments below.