Despite its name, the Northeast Astronomy Forum (NEAF) is primarily a trade show where makers and vendors of astronomical equipment show off their products. 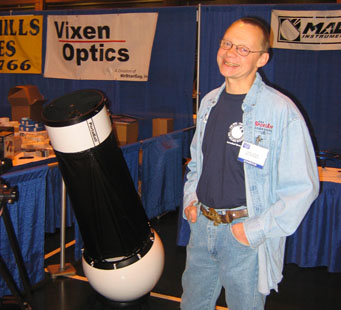 In general, I'm not much of a gearhead. I attend NEAF mostly to shoot the breeze with observers from all over the country, and the booths that interest me most are the ones advertising astronomy clubs and planetariums. But every now and then a piece of equipment catches my eye for one reason or another.

This year, I was most interested in the display by Mag 1 Instruments, makers of the legendary Portaball telescope. I was surprised to see the booth, since I knew that Peter Smitka, the former owner, had decided to go out of business. But it turns out that Smitka has sold Mag 1 to David Juckem, an avid amateur astronomer whose day job is machining precision parts for military and medical applications. Sounds like a match made in heaven! 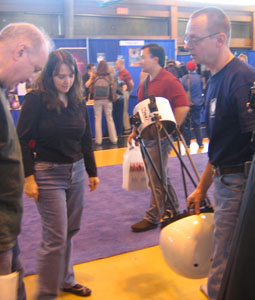 Why would anyone spend $3000 on an 8-inch telescope that can't be fitted with motor drive or setting circles? Well, can you pick up the tube of [i]your[/i] 8-inch Dob with a couple of fingers, as Juckem is doing here? The "ball" part of Portaball is obvious. The "porta" part has to be experienced to be believed.

Often described as an Astroscan on steroids, the Portaball is unlike any other telescope on the market. Like a Dob, it's steered by human brainpower, driven by muscle power, and controlled by friction. But in place of a Dob's low-tech wooden construction, the Portaball is all gleaming metal and (where appropriate) plastic.

More to the point, the Portaball doesn't have vertical and horizontal axes; the tube is free to turn in every direction. That has two huge advantages. First, it eliminates the notorious "Dobsonian hole." Tracking through the zenith with a Portaball is just like moving through any other piece of sky. And if the eyepiece seems a little to high or low for comfort, you just rotate the tube to bring the eyepiece to your eye. It's a dream for sharing views at star parties with children and adults alike.

In addition, the old Portaballs have superb optical and mechanical quality. Judging by Juckem's descriptions, the new ones should be better still. I won't know that until I've seen one at work under a starry sky. But I certainly wish Juckem all the best with his new enterprise.