Astronomers have discovered a neutron star that switches between X-ray and radio emission within a few days.

Dr. Jekyll lived a cursed life of his own making. Flipping between his better self and the depraved Mr. Hyde, Jekyll existed in a betwixt-and-between state until he decayed into Hyde permanently. 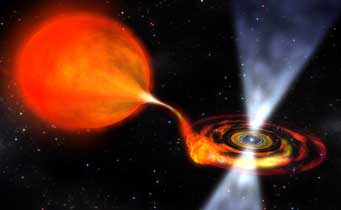 In a low-mass X-ray binary system, a spinning neutron star (pulsar) accretes material from a companion star, as shown in this illustration. The flow of gas from the companion to the pulsar is hot and glows in X-ray light, and when the material dumps onto the pulsar's surface, it produces a spike in X-ray emission.

Astronomers have now confirmed that something similar happens to neutron stars spun up by material they siphon from their regular stellar companions. The superheated material pouring onto these neutron stars emits X-rays and also creates a brighter X-ray outburst on the surface, but researchers suspected that when the downpour shut off forever, all X-rays would fade, leaving behind a whirling radio pulsar.

Evidence for this theory has been indirect until now. But Alessandro Papitto (Institute of Space Sciences, Spain) and colleagues have caught a pulsar repeatedly changing between X-ray- and radio-emitting states, a prelude to the final metamorphosis.

The team detected the X-ray transient IGR J18245–2452 on March 28th using the ESA’s Integral spacecraft. The source sits in the globular cluster M28, which lies right above the Teapot’s lid in Sagittarius. Checking a list of known radio pulsars in M28, the team discovered that the pulsar PSR J1824–24521 was in exactly the same location.

Over the next two months and using a slew of X-ray and radio telescopes, the astronomers watched the pulsar switch from X-ray pulses to radio pulses within a few days. Digging through archival data from the last several years, they confirmed that the source is a flip-flopper.

“It is a great result,” says Sandro Mereghetti (IASF Milano, Italy). “This object is the long-sought missing link between two different populations of neutron stars that were believed to be connected by evolution.”

Astronomers don’t know how long this transitional state will last, but the system will probably remain as-is for tens of millions of years, says Papitto. Roughly a billion years of accretion were necessary to spin the neutron star up to its millisecond period before the in-between stage began.

The mechanism behind the transitional state is complicated. The neutron star is sucking material off its companion at a roughly constant rate, building up a disk around itself. But this disk is like a bucket being filled with water: it has to load up before it hits a tipping point and pours its contents onto the pulsar’s surface. The buildup happens for two reasons: one, the disk itself transfers material intermittently; two, the neutron star’s strong magnetic field and the radio emission it helps create push back on the infalling material. Accretion becomes a competition between the gas’s pressure and the pulsar’s radiation.

The changing signals the team detected reveal this magnetic collapse-inflation process. “We actually witnessed the breath of a neutron star,” Papitto says.

Eventually, accretion will shut off for good. Over tens of billions of years, the pulsar will slowly spin down as it uses its rotational energy to power its radio emission. Assuming no cosmic interruptions, the pulsar will ultimately end just as Hyde did: a corpse.

This was a very interesting article!

I guess it became a corpse after becoming a neutron star, to be later re-animated. Anyways, this is why I subscribe to S&T - I understood the concept in this article much better than after reading NRAO's release.

Yes, exactly: this is why I often call pulsars "zombie stars" -- they are reanimated stellar corpses. Thanks for reading!