New X-ray and radio observations detected a strange switcheroo in the radiation from a pulsar. 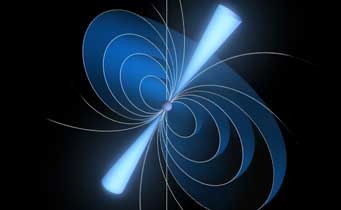 Artist's impression of a pulsar in "radio bright" mode, when the radio emission (blue beam) is high. As the pulsar spins (spin axis is vertical), the beam whips around in and out of sight, like a stellar lighthouse.

Pulsars are like zombie stars. They’re stellar corpses called neutron stars, left over from massive stars’ explosive deaths. But like zombies, pulsars have a second life in them: instead of decaying quietly, these highly magnetized objects send beams into space that radiate away the energy of their whirligig spins. They’re like lighthouses on steroids — well, undead lighthouses on steroids.

A new paper in the January 25th Science reports new observations that suggest pulsars might be ever weirder than astronomers thought. I know it’s hard to imagine something weirder than a zombie lighthouse, but X-ray and radio observations of a pulsar with a penchant for radio hiccups show that, contrary to expectation, the pulsar’s X-ray emission switches on and off, just like the radio emission — except that it does it in reverse: when the radio emission is “bright” the X-rays are not, and vice versa.

The ESA put out a really thorough press release on the result, which I recommend reading. As the release explains, the new observations raise questions about how these emissions are created and, more importantly, linked. It looks like big, fast upheavals happen in the pulsar’s magnetic bubble. But as Wim Hermsen (Netherlands Institute for Space Research and University of Amsterdam, the Netherlands) and his colleagues say in their paper, the whole thing is a big mystery.

ESA RELEASE:
Baffling pulsar leaves astronomers in the dark
New observations of a highly variable pulsar using ESA's XMM-Newton are perplexing astronomers. Monitoring this pulsar simultaneously in X-rays and radio waves, astronomers have revealed that this source, whose radio emission is known to 'switch on and off' periodically, exhibits the same behaviour, but in reverse, when observed at X-ray wavelengths. It is the first time that a switching X-ray emission has been detected from a pulsar, and the properties of this emission are unexpectedly puzzling. As no current model is able to explain this switching behaviour, which occurs within only a few seconds, these observations have reopened the debate about the physical mechanisms powering the emission from pulsars. . . . Read the full press release.

That’s an intriguing theory. Does anyone know why the sun’s poles flip regularly, and the Earth’s irregularly? Beyond hand-waving?

Maybe pulsars shouldn't be looked at as dead stars but as...catalysts for further spacial activity. Sort of like a reptilian or insect view, they don't just pass on, they carry on things. Like how when something decays it actually feeds back to the Earth natural system to well, create more life and keep going in circles...idk. I'm no expert but just thinking! 🙂

Probably no human knows Peter, but I wouldn't say no one knows. I too liked Richard's suggestion. His idea flows naturally from imagining a spinning magnetically active star collapsing into a neutron star.

...and maybe they shouldn’t be called neutron stars. Neutrons cannot carry current, yet the stars’ huge magnetic fields imply tremendous currents, which means they are super-conductors, not insulators.

Yesterday after reading Peter’s last post I thought about when as a kid I had first read about “neutron” stars in a National Geographic article about 40 years ago. I remember showing my dad a statement in the article that went something like, ‘the density of neutron star material is so large that a teaspoonful of it would weigh as much as 100,000 elephants’ or some other ponderous parcel of pachyderms. We marveled at this, and then, since he was a student of the Bible he would remind me of a thought like, “How many your works are, O Jehovah! All of them in wisdom you have made …” from Psalms 104:24 and then from Isaiah 40:26 “Raise your eyes high up and see. Who has created these things? It is the One who is bringing forth the army of them even by number, all of whom he calls even by name. Due to the abundance of dynamic energy, he also being vigorous in power, not one of them is missing.” My parents encouraged my interest in science while also showing me that science is a way to get to know about God’s awe inspiring wisdom and power.

So one of the first things we all learn about these so called “neutron” stars is their tremendous density, how the whole star is as dense as an atomic nucleus. Since the mass of the neutron equals the mass of a proton plus an electron it’s natural to think that the whole star must be one big ball of neutrons. Maybe so internally, but as Peter has pointed out neutrons cannot carry charge or interact magnetically. Now consider that the mean lifetime of a free neutron is less than 15 minutes. A free neutron will decay into a proton, an electron and an electron antineutrino. Certainly particles in the interior are anything but “free”, but consider the surface boundary layer where the density transitions from the extremes of the nuclear to the near vacuum of space over a very small distance. Charge carriers must be free here, or no magnetic field would exist. Perhaps just as conservation of angular momentum drives up the rate of spin in a contracting rotating body there is a similar conservation of magnetic field strength. In any case, a pulsar’s surface remains a region of tremendous “dynamic energy”, even long after the supernova remnant has dissipated into space.

While the particles in the interior are certainly not free, they exist at billions of degrees C, and intuition breaks down. I’m assuming their interiors have no electrical resistance, but I’ve never read anything that that says so or otherwise, only that they have immense magnetic fields, which implies immense currents. Also, they pulse because the current loops, whether interior or on the surface, are not aligned with the rotation axis. What happens when a star collapses past neutron density to form a black hole? I’ve never heard of a pulsating BH. The magnetic field does not disappear. Is it forced to align itself with the spin axis?

The answer to the title Peter gave his above comment is – OF COURCE! They MUST conduct to have the magnetic properties they display. Neutrons can’t conduit because they are neutral. Duh. We should have thought of that, right? Peter’s earlier suggestion that “perhaps we shouldn’t call them neutron stars” is good, but just like “planetary nebulas” the phrase is here to stay I would guess. I think that the assumption that neutrons can be made simply by gravitationally crushing protons and electrons together must be wrong. A fundamental principle at work here is that energy cannot be destroyed. Nature can’t just cancel out the energy trapped in the magnetic field, so charge carriers must still remain. As to black holes, the three properties they conserve from all the stuff that falls into them are mass, angular momentum and net charge. Magnetic field energy which is drawn down into their gravitational wells also cannot be destroyed, so this energy must help power black hole jet phenomena as a means of disapating electromagnetic energy.