[email protected] is one of the world's most venerable "citizen science" projects. Founded in 1999, it uses the downtime on a global armada of people's computers to sift through vast amounts of cosmic radio hiss gathered by Puerto Rico's Arecibo Observatory, looking for weak signals that might have been broadcast by extraterrestrial civilizations. But few organizations have escaped the Great Recession unscathed. Has [email protected] been any different? 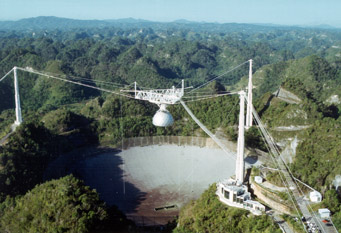 Courtesy of the NAIC-Arecibo Observatory, a facility of the NSF

In short, no. Much of the project's funding comes from corporate and individual donations, and over the past few years both sources have dried up. "Individual donations have dropped to below one half of where they were before the recession," says Eric Korpela, [email protected]'s project scientist. "And corporate donations have been very hard to get since before the recession." As a result, [email protected] has had to lay off one of its four staff members. The lack of funds also hampers the development of new software and website features, especially software that helps identify interesting radio signals and removes Earthly radio interference.

Although [email protected] has lost some of its funding, the organization is used to surviving with little funds. "Money has always been tight for SETI," says Dan Wertheimer, the project's chief scientist. "This is a high-risk, high-reward endeavor, and therefore does not attract donations easily."

To help support [email protected], a nonprofit charitable organization called the GPU Users Group has come forward. It began as a hard-core subset of [email protected] geeks who enlisted their computers' graphics processors (GPUs) into doing data analysis alongside their computers' central processors (CPUs). This group now donates money, software, and equipment to needy scientific organizations, and they remain especially interested in the use of parallel processing in distributed computing. As [email protected] fell on hard financial times, they raised extra funds for it. You can donate money via the group's website — and even specify which piece of equipment you'd like your donation to support.

"By facilitating donations through the GPU Users Group for [email protected], we are able to specifically target each donor's funds toward building much-needed hardware for the project," says Brad Deauman, the group's executive director. "Another attractive feature of the GPU Users Group is that we currently enjoy substantial price breaks from hardware vendors, which allows us to stretch the donor's dollar even further."

The [email protected] project remains popular with its users worldwide. A recent report notes that during the past 10 years, more than 5 million people have downloaded the [email protected] software. Currently there are around 150,000 active users with 226,000 computers. And, says Korpela, 200 new volunteers sign up each day.

When you volunteer for [email protected] (via BOINC, the Berkeley Open Infrastructure for Network Computing), you download software that can run in the background when your idle computer goes into screensaver mode. The software fetches a 250-kilobyte "work unit" of radio data collected by Arecibo, mulls it over for about an hour looking for narrowband (i.e. unnatural) signals in various possible forms, then sends back the result and downloads another. The global network of personal computers doing this work amounts to a virtual supercomputer capable of 3.5 petaflops, or 3.5 quadrillion operations per second.

The poor economy has forced [email protected] staffers to shift their priorities. "It's always a problem that when money is tight, we spend more of our time trying to find funding and less time doing the work we want to do," says Korpela. "It's not the most efficient system, but it's the one we have."

Money problems aside, the program retains a loyal following. Many have participated since [email protected]'s inception 12 years ago — often competing individually or on teams for work-unit bragging rights.

The SETI Institute Too

[email protected]'s situation parallels that of a different major SETI project: the SETI Institute's Allen Telescope Array (ATA) in northern California. The ATA had to halt operations last April for lack of funds. An internet appeal by the SETI Institute mobilized volunteers to contribute $228,000 to date, beating the target of $200,000. This has enabled the ATA's scan for signals along the Milky Way's midplane to resume, at least temporarily.

The ATA's long-term future remains shaky. It needs $5 million to fully fund operations for the next two years (renting its services to the Air Force for orbital-debris tracking may help), and it would take $50 million to expand the array from its current 42 interferometrically-linked dishes to the 350 originally planned. Getting the ATA to its current point cost $50 million over the last decade or so, including $25 million from the Paul G. Allen Family Foundation. Read more.

See our longstanding overview and explanation of all the world's SETI projects for more about what's happening, how searches for alien signals work, and what strategies have been chosen and why.

IMHO, this is pursuing a fantasy. It would not totally surprise me if evidence for life elsewhere might be found in the next 30 years or so. But I think it might be fossilized or a simple life form.

In fact, the search for extraterrestrial civilizations and alien life in general is not a matter of discovery only. It is mater of us in Universe.

So, we have to search - listen and watch, crunch the data and explore the Space. Space is not a final frontier, however. This frontier is on Earth, inside Us.