These stellar corpses have many faces, from pulsars to magnetars. New models provide evidence for unifying these disparate objects under one theory. 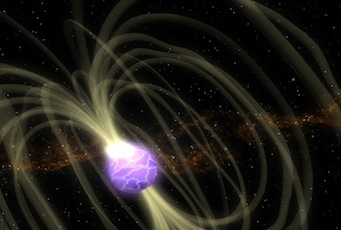 In this illustration of a magnetar (roughly 20 km in diameter), the magnetic field lines are shown emerging from the poles of the star and arcing into space.

Astronomers have it tough: in no other field are researchers as far removed from their subjects as astronomers are from stars and galaxies. Bizarre objects are discovered that can’t be poked and prodded in the lab. “What do astronomers do when we discover something we don’t understand?” one of my professors used to ask in class. We all knew the response: “We give it a name!”

By that metric, neutron stars are poorly understood indeed, for these ultra-dense leftovers of exploded stars have many names — pulsars, magnetars, and plenty of acryonyms besides. Each of them seems to be a different species, with different environments and appearances. Some are extremely bright in X-rays but near-silent on radio wavelengths, or vice versa, and their magnetic fields range from 100 billion to 10,000 trillion times stronger than Earth’s. Scientists have long suspected that this wild menagerie represents just one type of stellar animal seen at various stages of development. Unifying them under a single theory has been an elusive goal for decades, a pursuit now aided by space telescopes such as XMM-Newton and Chandra that enable detailed study of the objects’ X-ray emission.

An international team of astronomers has now constructed theoretical models that they think represent a “major step” towards doing just that, to be published in an upcoming Monthly Notices of the Royal Astronomical Society. Daniele Viganò (University of Alacant, Spain) and colleagues produced detailed simulations of neutron stars as they age and cool off, then compared their results with X-ray observations of 40 known neutron stars. They found that as their fake stars aged, they take on the appearance of each of the observed categories.

“Observationally it seems that you have a zoo,” Viganò says. “[But] they are the same animal, just acting in different environments, and we can prove this for the first time in a [quantitative] way.” 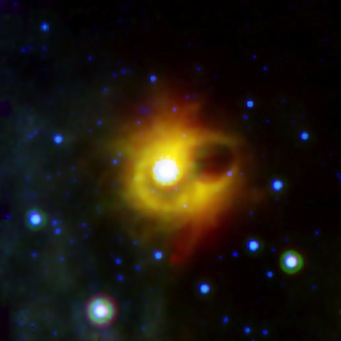 The magnetar SGR 1900+14 is not visible in this image from NASA's Spitzer Space Telescope, but it is right in the center of the ring. (The bright region near the center is a small cluster of stars.) The inner edge of the ring may have been hollowed out by an explosive burst detected in 1998. This magnetar is one of the objects in Vigano et al.'s study.

This zoo began in 1967 with the discovery of radio pulsars, rapidly-rotating neutron stars that flash us with pulses of radio emission as the beams channeled by their magnetic fields sweep in and out of view. But some neutron stars instead are magnetars, the “drama queens” of the family — boasting the strongest magnetic fields ever detected in the universe and flaring unpredictably with hot X-ray and gamma-ray emission. There are also high-B pulsars (where B is the symbol used for the magnetic field), which fall somewhere in between the first two, and the Central Compact Objects (CCOs), a puzzling breed found only in the midst of supernova remnants that has a meek magnetic field and is quiet in the radio, yet somehow manages to emit plenty of heat. And then there are seven known XINSs: X-ray Isolated Neutron Stars, which are also radio-quiet, old and coolest of all — perhaps why astronomers have dubbed them “The Magnificent Seven.”

Any theory to unify this apparent zoo of creatures must explain both the wide range of temperatures and magnetic fields — and this is where it gets tricky. “This is important — and difficult to treat — because the temperature affects how the magnetic field evolves, and the magnetic field in turn affects the thermal evolution,” says Sandro Mereghetti (IASF-Milano), who was not involved in the study.

The magnetic fields are thought to be concentrated in the stars’ outer kilometer, in a crust so dense that it locks the protons and neutrons into place. But in between them flows a sea of electrons carrying electric current.

It’s in the dynamics of this electron ocean where Viganò’s team makes their mark: they’re the first to incorporate an electromagnetic phenomenon called the Hall effect. In this effect, the electrons’ paths are deflected by the magnetic field, and as they pile up in their new locations they create an electric field, which in turn creates a current, which then affects the magnetic field, and so on.

This complex chain of effects is frequently ignored — it’s complicated and usually too insignificant to bother with. But according to Viganò’s team, who have been working on the problem since 2006, it’s the most important effect in magnetars. In their simulations, thanks to the Hall effect, magnetic fields that normally arc from pole-to-pole can be induced to also run rings around the star. This “shakes” the magnetar and breaks up its crust, dissipating its intense magnetic field in as little as 10,000 years and generating vast amounts of heat that the star radiates away. 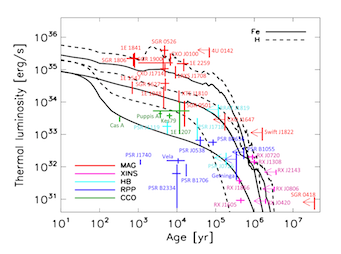 This plot shows the brightness and ages of 40 neutron stars (click to enlarge). According to ViganÃ²'s team's paper, neutron stars begin their lives in the upper left of the diagram and fade over the years to the lower right, following the solid and dashed lines. (The lines correspond to models with different neutron star compositions â€”Â the solid line is iron and the dashed line is light elements like hydrogen). The different colors of the data represent the different categories, and the models run through each of them as they grow cooler and fainter.

By comparing their models to the observations, the astronomers found a series of evolutionary tracks for neutron stars. In them, the powerful, bursty magnetars are young neutron stars that, because of the Hall effect, rapidly lose their magnetic fields while emitting huge amounts of X-rays and gamma-rays. Eventually, they cool off to become high-B pulsars, and then cool further to be classic radio pulsars. On the other hand, the mysterious CCOs are thought to be submerged in a deluge of supernova debris raining back down. That would explain their weak magnetic fields and is consistent with Viganò and his colleagues’ calculations. Eventually, in old age, all neutron stars cool off to join the Magnificent Seven as XINSs.

Mereghetti agrees this picture is a step forward in taming the zoo, although he cautions that astronomers are still far from a complete understanding of these objects. Although the simulations match the data, he says those data are not precise enough to be a definitive test of the models’ fidelity. “I think that what we really need are much better data on a larger sample of isolated neutron stars,” he says, adding that the lack of major X-ray space telescopes in the works might put that on hold.

Thanks Mark for your clear explanation of this rather arcane work. It is satisfying to know that astronomers are learning more about the life cycle of neutron stars and how they appear differently at different ages. Understanding how a particular phenomenon develops and appears over time gives that pattern beauty and grace.

Follow-up question: What are the energy sources that cause supernova remnants (like the Veil Nebula) to glow thousands of years after the explosion? ... the neutron star itself, shock waves from the expanding material, radioactive elements or ? Which is most important? - Thanks.