Thomas J. Johnson, the creator of the modern Schmidt-Cassegrain telescope and the founder of Celestron, died early this morning (March 13, 2012), according to Celestron president and CEO Joe Lupica. Johnson was 89. 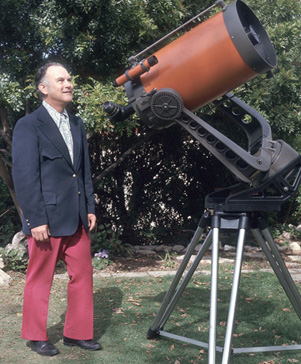 Telescope visionary Tom Johnson poses with one of his early Celestron Schmidt-Cassegrain telescopes.

He ranked among the most important figures shaping the last half century of amateur astronomy.

Johnson was in his early 30s when, in 1955, he used his World War II experience as a radar technician, and postwar employment in the electronics industry, to establish a company called Valor Electronics. Based in Gardena, California, Valor made various components for military and industrial customers, and by the early 1960s it had expanded to roughly 100 employees.

As Valor was growing, so too was Johnson’s own interest in amateur astronomy. After first purchasing 4-inch and later a 10-inch Newtonian reflector, Johnson then headed down a path followed by many amateurs of the day and turned to the hobby of telescope making. The first scope he made was an 8-inch f/4 rich-field Newtonian, soon followed by a 12-inch Cassegrain. Meanwhile, in 1960 he established an "Astro-Optical" division of Valor.

His next telescope project demonstrated that his telescope-making talent and energy would be truly formidable. This scope was a highly unconventional 18¾-inch Cassegrain, made to be transportable. To reduce the weight of the 3-inch-thick primary mirror, Johnson had a ribbed pattern sandblasted into the back of the glass blank. Six months and about $1,000 later, he had a fork-mounted scope that could be disassembled and packed into a car in about 15 minutes. 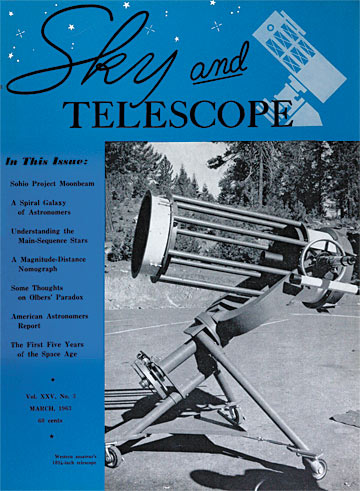 On July 28, 1962, he hauled the scope to the parking area atop Mount Pinos for its public debut at one of the Los Angeles Astronomical Society’s star parties. It made a big impression among the group’s advanced amateurs, who examined it in detail. The telescope was so noteworthy that it became the cover story of Sky & Telescope's March 1963 issue.

But it was another S&T article that prompted Johnson to change history. As he was finishing the 18¾-inch scope, Donald Willey published a seminal analysis of Cassegrain telescope designs in the April 1962 issue. Johnson was intrigued by the excellent off-axis optical performance of the Schmidt-Cassegrain design. Based on his experience building the 18¾-inch scope and a plan to use optics made to order by Perkin-Elmer Corporation, Johnson took the bold step of advertising a 20-inch multipurpose Schmidt-Cassegrain telescope, called the "Celestronic 20," in S&T’s January 1964 issue.

The Astro-Optical Division name quickly morphed to Celestron Pacific, a division of Valor. By December Valor was dropped, and Celestron’s ad introduced pictures of 4-, 6-, 10-, and 22-inch Schmidt-Cassegrain telescopes as well as mention of a 36-inch. But most of Celestron’s sales were for the 10-inch, which cost about $2,000 when outfitted with basic accessories.

Despite his initial arrangement with Perkin-Elmer, Johnson was soon making his own Schmidt-Cassegrain optics. A breakthrough came early on when Johnson created a method for mass producing the telescopes’ optically complex corrector plates. For this and other contributions to optics, Johnson was later awarded the Optical Society of America’s David Richardson Medal; he was one of only a few non-Ph.D. optical engineers to ever receive the honor.

In the late 1960s, Johnson and his colleagues speculated that the sweet spot of the market would be for a compact, quality 8-inch portable Schmidt-Cassegrain costing around $1,000. And unlike most telescopes of the day, it should be as photography-friendly as the technology of the time allowed. Johnson returned to the drafting table, and what emerged was the $850 “classic C8,” first advertised in S&T’s June 1970 issue. With a radically new orange and tan motif, the C8 was an overnight hit. It set the pattern for all the amateur Schmidt-Cassegrains that would follow in the coming decades from Celestron, its competitor Meade Instruments, and others.

Writes Celestron's president and CEO Joe Lupica: "Tom's innovative, pioneering spirit created a revolutionary method of mass producing an affordable Schmidt-Cassegrain telescope design, which allowed millions of amateur astronomers to pursue their passion for astronomy. Other notable achievements include a 1978 David Richardson Medal from the Optical Society of America, a 1993 Bruce Blair Medal from the Western Amateur Astronomers, and a 2009 Lifetime Achievement Award by the Small Telescope & Astronomical Society. Our hearts go out to Tom's wife and family and to all who were touched by his achievements and innovation."

For more about Johnson's life and how his optical innovations revolutionized amateur astronomy, see The Path of Light. Produced by Celestron two years ago, this 17½-minute documentary features interviews with Johnson and others who grew up using his telescopes.

S&T senior editor Dennis di Cicco has followed and written about the telescope industry for decades.

What a sad day for astronomy!

Truly a loss for amateur astronomy.

Is this column meant to be a tribute to Tom Johnson, or to Sky & Telescope? You guys need to ease up on the self-promotion a bit.

Tom Johnson's legacy is one of the most wonderful telescope designs in history! My first "serious" telescope was a "pumpkin-orange" C8. I've been brand loyal to Mr. Johnson's company for years. He will certainly be missed by countless amateur astronomers throughout the world.

My first decent telescope was a 5-inch Celestron Schmidt Cassegrain, and even though I now have bigger and more expensive telescopes, the C-5 is still the one I use most frequently. I keep it set up on an equatorial mount, ready for a quick trip to the back yard to look at tonight's sights, or the Sun through a white-light solar filter. It's sobering to be reminded that this robust little telescope hasn't always existed, that it was, if not quite invented, then certainly popularized and established by Tom Johnson. Thanks Tom. My condolences to the Johnson family, and best wishes to Celestron for continued success. [Paragraph] As for the relationship between Celestron and Sky and Telescope, Mr. Johnson learned about the schmidt-cassegrain design in the pages of S&T, and the skywatching community certainly wouldn't have learned about Celestron if not for the magazine. So it seems like a mutually beneficial relationship, and deserving of recognition.

THANK YOU TOM FOR EVERYTHING.
Our family condolences to the Johnson family

One of the most important thing in life is the legacy one has to leave behind when he goes. Obviously, Tom Johnson made a good contribution in astronomical world and that is one of the remarkable legacy one can hope to leave behind. My warm condolences to the Johnson's family.

This is Roger L Johnson - nephew of Thomas Jasper Johnson. In 1955 or 56, I was shopping for airplanes at a local hobby shop, and on the clearance table was a kit for making an 8 inch reflector telescope lens. I bought it, took it home, secured the grinding stone on a post, and began the arduous task of rubbing that disc of Pyrex back and forth for hours. Being 13 years old, I quickly realized that I would be an old man before I had ground that Pyrex into a reflector lens. Uncle TJ stopped by for a visit and asked me what I was making. I explained the kit and asked if he wanted it. He took it home, and while hand-grinding it, he figured out how to build a machine that would grind the Pyrex automatically. Voila! Uncle TJ was in the telescope building business. [email protected]