An extraordinary X-ray flare is teaching astronomers about a new class of accreting black holes. 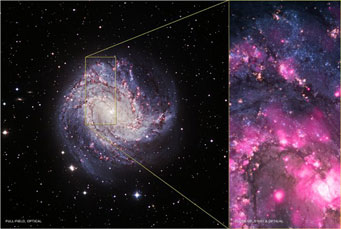 An ultraluminous X-ray source (ULX) appeared in a recent Chandra image of spiral galaxy Messier 83. A full view of M83 is on the left. Zooming in, a composite image shows X-rays in pink and optical light in blue and yellow. The ULX is located near the bottom of the composite image.

The sweeping arms of Messier 83, a grand-design spiral galaxy in the Hydra constellation, are bursting with bright clusters of newly forming stars. Between the arms a rural emptiness prevails, sprinkled with a few dimmer, older stars. But that landscape changed in a December 2010 observation when a mysterious object popped up between the arms, blazing in X-rays and visible light.

The Chandra X-ray Observatory had caught what researcher Robert Soria (Curtin University) and his colleagues call “an unexpected gift” — a new X-ray source so bright that it defies easy explanation. Follow-up observations in visible light revealed a bright new blue object at the exact location of the X-rays.

Even “ordinary” X-ray flare-ups have an exotic explanation. Stellar-mass black holes feed on gas pulled from a companion star, and if that star “burps,” the black hole will get an extra flood of gas. When matter falls down a black hole’s deep gravitational well, it gains immense speed and energy, heating to X-ray temperatures as it jams together to form an accretion disk before finally spiraling into the hole.

But the flare-up in M83 was too powerful to be explained in this way — the X-ray brightness increased by at least 3,000 times over a span of a few years. “Ultraluminous” X-ray sources (ULXs) like the one in M83 exceed the natural limit on how fast gas can fall into a stellar-mass black hole. Beyond this so-called Eddington limit, the incoming gas would become so hot and bright that the pressure from its own radiation would blow it back off. The Eddington limit thus regulates the maximum accretion flow, and hence the maximum luminosity.

The only way out is for ultraluminous sources to have bigger black holes, even though it’s hard to make a very big black hole from a collapsed star. In the case of M83’s ULX, the researchers estimate that the black hole has 40 to 100 times the mass of the Sun. If the black hole were of stellar mass, it would have to be feeding on gas at a rate at least three times the Eddington limit. The blue light seen at the location of the X-ray flare is probably associated with gas flowing into the massive black hole. 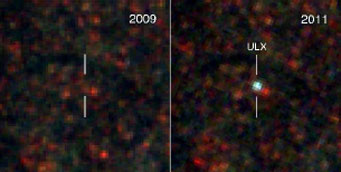 True-color images from the Hubble Space Telescope show the region around the ULX. In 2009, the ULX hadn't yet "popped," so only some faint, red stars are visible. But by 2011, a blue object — not a star — had appeared. The blue light is likely emitted from gas swirling around a black hole.

But what really interested astronomers was the lack of any trace of a star at the flare-up’s location on earlier images. Most ULXs have young, high-mass companion stars with strong stellar winds to feed the black hole. A young companion star implies that the black hole is similarly young. But any young star would have been bright enough to be observed in images taken before the flare-up, so the donor star for M83’s ULX is likely older. The observations suggest that there are actually two classes of black holes responsible for ULXs. While some black holes are young and growing steadily, an older class of black holes may also exist, growing in flares and spurts.

“ULXs that have old stellar companions must be quite rare and have been elusive,” says Bret Lehmer (Johns Hopkins University), who was not involved in the study. “So I think this is definitely an exciting object that will advance the field.”

Excellent description of why black holes can be the brightest objects in the universe. The only part I’m confused on is, "...the black hole needs 40 to 100 times the mass of the Sun. If it were any smaller, it would have to be feeding on gas at a rate at least three times the Eddington limit." Does that mean the Eddington limit is 100 solar masses for the observed luminosity, yet a smaller object could be exceeding its calculated limit for some reason, down to 40 solar masses, but the limit cannot be exceeded by more than three times the limit?

Hi Peter,
If the black hole is accreting at the Eddington limit, it would be about 40 times the mass of the Sun. The estimate of 100 solar masses comes from another method that doesn't involve the Eddington limit. I'm going to change the wording of the article a little to make this more clear, thanks for pointing it out!

In 2nd set of photos variations in brightness are seen in stars near the bottom. Does this suggest variable stars or something else?
Also, for the ULX could there be an eclipsing double that hid this phenomena, or even aggregated to form it? Why do we need to assume a black hole?

Hi all. This is a very interesting story. It’s teaching a lot about the Eddington effect. Before this article I didn’t know about the Eddington limit's application to non-stellar objects like black holes and accretion disks. The Eddington limit is one of the many consequences of the balancing of the fundamental forces that make parts of the universe habitable. This effect is what limits the size of stars to around 120 solar masses if I remember right. Therefore it also helps to control the supernova rate as well as some of their luminosities and the black hole mass left over by some of them. This leads to a question, how do you get a black hole in the upper end of the 40-100 solar mass range? The more massive a star, the more intense it’s stellar wind is, and therefore it sheds lots of material before it goes supernova. Also of course the supernova event itself blows off a large fraction of the star, so again, how can a stellar remnant black hole have so large a mass?

Hi, I'm the lead author of that paper. Thanks Monica for the nice article. Several interesting topics raised by the comments.

Peter: the Eddington limit on the luminosity implies a mass of about 40 solar masses. The value of 100 solar comes from the temperature and size of the inner accretion disk, if they scale like in standard accretion disks seen around stellar black holes in the Milky Way (inner radius of the disk proportional to black hole mass). I prefer the 40-M estimate.

J. O'Rourke: both the X-ray and the blue optical source were not visible in any observations prior to Dec 2010, over many years, and were then visible throughout 2011: so it cannot have been just an eclipse. The X-ray luminosity requires an accreting black hole, as it is much higher than the maximum X-ray luminosity of a normal star or a neutron star. As you note, there are many reddish stars in the field, some of them variable, but they are all "asymptotic giants" (a variety of red giants), a few 100 million years old, with temperatures of about 3500 K. The new blue source in the middle is completely different, hotter than 20,000 K. You don't find a star like that in the middle of a red giant population: it is not a star but the accretion disk around the black hole.

Bruce: you are right about the Eddington limit, balancing gravity and radiation pressure, although some stars can be as massive as 200 solar. The mass loss in the wind scales with metal abundance: stars with low metal content lose less mass. A metal-poor star can keep up to half its mass until its final supernova collapse: that's one way of helping black hole formation. Another possibility is that massive stars (more than 50 solar masses) do not blow off their outer layers when they collapse, because those layers fall back onto the core. In summary, the maximum mass of black holes formed from stellar collapses is thought to be about 70 solar.

Rob_Soria, I'm honored to receive refinement of my thinking and answers to my questions from such an authoritative sorce. And sincerely, thanks for the work ya'll do in helping us see and understand what's out there.

Thanks, Rob Soria. Accretion disks are not spherically symmetric, so their luminosity depends on viewing angle. My understanding is that they would appear brightest when seen looking straight down the rotational axis. Seen from an angle, the disk reduces in area to an ellipse, and the material coming towards the observer is brighter and blue-shifted, while the material moving away is dimmed and red-shifted. When seen edge-on, the disk itself would block light from the inner regions. I was expecting the 40 to 100 solar mass limit to depend on the viewing angle. What do we know about the viewing angle in this case?

Hi Peter. The good question you raised might require a larger light bucket than Hubble. Mankind may never reach the point where an even bigger telescope might not be desired

Peter, you are right the disk would look brighter if face-on (inclination angle i ~ 0).
We can only measure the projected disk area x (cos i), that is the disk radius x sqrt(cos i).
We know it is not edge-on (that is, i must be <~ 70deg) because we would have seen
more cold-gas absorption, perhaps even eclipses. Luckily sqrt(cos i) is of order 1
for any i ~ 0 to 70deg. The location of the inner disk radius is also uncertain,
depending on BH spin (R ~ 6GM/c^2 for non-rotating BHs). So, all those mass
estimates are just indicative to a factor of 2 or 3. None of those candidate
"heavy" BHs has ever had a precise mass measurement, because the optical emission
is too faint to study Doppler shifts of their lines (we are talking V ~ 24 mag).
Hubble can resolve the objects but doesn't collect enough photons, as Bruce says.
A precise measurement of those BH masses would test the validity of the Eddington limit,
and fundamental theories of stellar collapse/BH formation.

Peter, how goes the quest? I hope that our epic dark energy thread at least generated some interest. What happens near black holes and at other sites may provide examples of your concept that might be easier to grasp than the EMS analogy. [email protected]