October's a perfect time to see the zodiacal light, a tapering tower of comet dust standing high in the eastern sky before dawn. Here's how to find it.

Wednesday morning, 5:30 a.m. I'm driving too fast down a country road in search of a clear sky to watch the total lunar eclipse. Totality is underway, but clouds in the west smother the Moon. I stop the car and get out to scan the sky for my next move ... and suddenly there it is. The zodiacal light.

Like a finger pointing the way, a tapered cone of light towers halfway up the eastern sky. Of course, I think. Head east. At least it's clear in that direction. Fifteen minutes later, a fragile, orange-red Moon emerges from the gloom.

For me, the zodiacal light was an omen that morning. For all of us, it's an opportunity to see how nature fashions cast-off comet and asteroid dust into an ethereal glow visible in a dark sky before dawn in the fall.

The zodiacal light runs along the zodiac, a band of sky centered on the Sun’s apparent path through the heavens called the ecliptic. It's here you'll find the Sun, Moon, and all the planets as they scuttle through the 12 familiar zodiac constellations. During fall, as seen from the northern hemisphere, the ecliptic tilts up at a steep angle from the eastern horizon, bringing into view a softly-luminous pyramid or finger of light at dawn. To the uninitiated, it strongly resembles a glowing dome of light pollution from a nearby city, but its distinctive tapering shape and tilt set it apart.

Sunlight reflecting off comet and asteroid dust concentrated in the plane of the solar system creates the zodiacal light. Heat from the Sun vaporizes dust-laden comet ices, which expand outward to form the comet's coma and tail. Liberated from the grip of the icy nucleus, the dust is cast off into space. Dust from asteroid collisions also contributes a significant fraction to the pot.

Much of the dust settles into a vast, rarefied cloud in the plane of the solar system where it scatters sunlight, glowing like a cloud of foggy breath you exhale on a cold morning. Dust closer to the brilliant Sun scatters light back to our eyes with greater intensity; dust farther away less so. That’s why the zodiacal light is brighter at its base — which is closer to the rising Sun — than at its tip.

Like going to the bank to making a weekly deposit, every time a comet passes through the inner solar system, it contributes billions more dust particles to the zodiacal light. Many of them eventually spiral in toward the Sun and get zapped, so the cloud has to be continually replenished. Not a problem. Comets come and go all the time, and new ones arrive from the Oort Cloud nearly every year.

The best time to look for this unearthly glow is on moonless mornings starting about 2 hours before sunrise. Because much of it is as bright as the summer Milky Way, you don't need absolutely pristine skies to see it. Find a location with a dark eastern sky and look for a large, tapered glow that reaches 45° or higher. Make slow scans from left to right as you face east to help you see the contrast between the light pyramid and darker sky.

With no bright Moon to bother us, October 21 through November 4, 2014, is an ideal time to go out for a look. A second moonless period begins on November 20th, though the ecliptic angle will be shallower. As you take in the sight, consider that you're gazing at the single largest visible structure in the solar system created by some of its tiniest members — dust motes!

Have You Seen the Zodiacal Light? 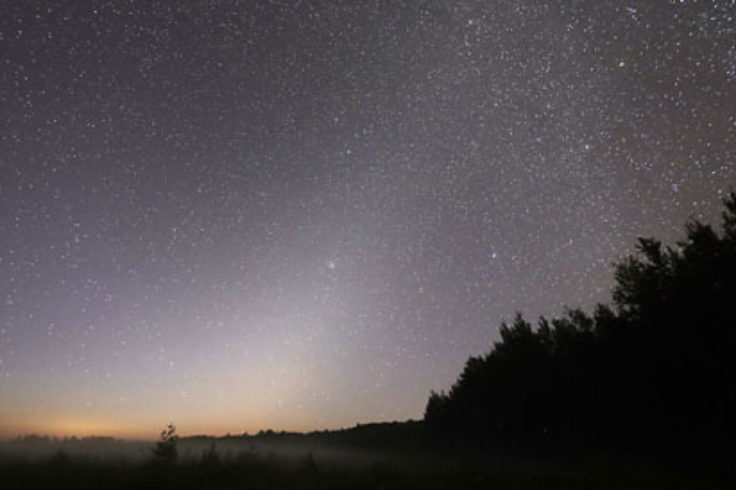 The Sacred Hour Before Dawn and an Evening Comet Surprise