Saturn, Mars, Delta (δ) Scorpii, and Antares form an equally-spaced ragged line in the southwest at dusk, as shown at right. Delta Scorpii used to be a bit dimmer than Beta above it. Then in July 2000 it doubled in brightness. It has remained bright, with slow fluctuations, ever since.

Look high above the Moon this evening for Altair.

This is International Observe the Moon night! Zoom in on the map to find an event near you. Or set up your own telescope for the public, and add your event to the map so people can find you! The Moon is waxing gibbous, two days from full. (Just make sure it'll be in view from your site when you tell people to come!) See our article, A Worldwide Night of Moonwatching.

Also, look to the right of the Moon, by a little more than a fist-width at arm's length, for two faintish (3rd-magnitude) stars: Alpha and Beta Capricorni, one above the other. Alpha is the one on top. With sharp vision, you can barely see that it's double. Binoculars resolve it easily.

Look for bright Vega passing your zenith in late twilight, if you live in the world's mid-northern latitudes. Vega goes right through your zenith if you're at latitude 39° north (near Baltimore, Kansas City, Lake Tahoe, Sendai, Beijing, Athens, Lisbon). How closely can you judge this?

Full Moon (exact at 9:38 p.m. EDT). The Moon shines in dim Aquarius. To its upper left in the evening, the western side of the Great Square of Pegasus points down toward it (more or less). This is another perigean "supermoon," the third in a row.

The gibbous Moon, still big, rises in the east in late twilight. Look well above it for the bottom corner of the up-tilted Great Square of Pegasus.

A winter preview: If you're up before dawn this week, the sky displays the same starry panorama as it will at dusk early next February: Orion stands high in the southeast, Sirius and Canis Major sparkle to Orion's lower left, Gemini occupies the east to Orion's left, and Jupiter shines far below Gemini's Castor and Pollux. Come February, Jupiter will still be near there.

Antares, Mars, and Saturn now form an almost equally spaced straight line, as shown at right. Mars continues to move east against its starry background. Watch for it to pass 3° north of Antares on September 27th and 28th.

This evening one of Saturn's moons, 10th-magnitude Rhea, will occult (cover up) a much brighter star, 7.8 magnitude SAO 159034, as seen from North Carolina northward. Telescope users farther south will witness a near miss. Details and illustrations are in our article, See Saturn’s Moon Rhea Hide a Star.

How soon after sunset can you make out the big Summer Triangle? Vega, its brightest star, is nearly at the zenith (for skywatchers at mid-northern latitudes). Deneb is the first bright star to Vega's east-northeast. Altair shines less high in the southeast.

Mercury (magnitude 0.0) remains quite deep in the sunset, as it always does during its evening apparitions that happen in late summer and early fall. Scan for Mercury with binoculars just above the western horizon about 20 minutes after sundown. Don't confuse it with Spica to its upper left.

Venus (magnitude –3.9) and Jupiter (magnitude –1.8) shine in the east during dawn. They continue moving farther apart: Jupiter is moderately high now, and Venus is quite low (to Jupiter's lower left) as sunrise approaches.

Mars and Saturn (magnitudes +0.7 and +0.6, respectively) glow in the southwest at dusk, moving farther apart day by day. Saturn is the one on the right. To Mars's left are fainter Delta Scorpii, and then Mars's starry namesake, Antares.

Uranus (magnitude 5.7, in Pisces) and Neptune (magnitude 7.8, in Aquarius) are high in the southeast and south, respectively, by midnight. See our Finder charts for Uranus and Neptune online or in the September Sky & Telescope, page 50. 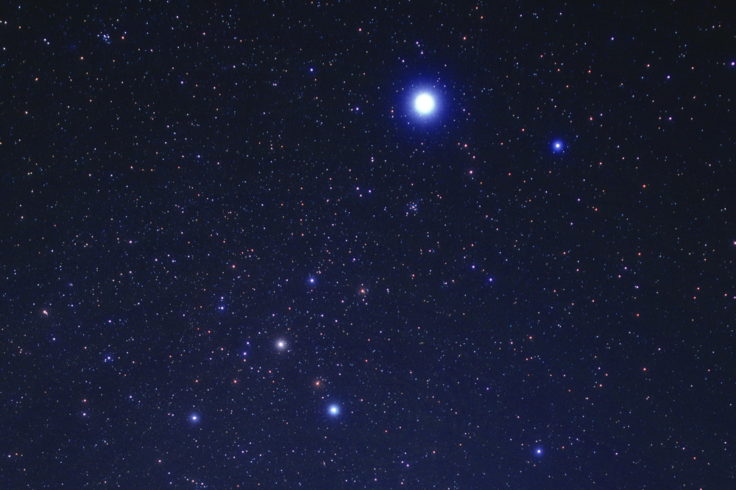 A Bino Tour of the Big Dog