Eight years ago, Sky & Telescope ran a short piece by a stargazer who had cut down a bunch of trees to get a better view of the sky. It provoked a startling number of outraged letters. 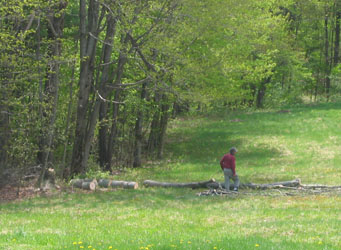 The author cut this tree primarily to get a better view of the sky.

Chainsaw astronomy seems to be very controversial, yet the subject arises over and over. Truth be told, in many parts of the world — including my own — trees are the single biggest enemy of stargazing. Sure, light pollution diminishes what you can see, but trees stop it completely. In its natural state, inland New England would have nary a view of the night sky except at the edge of rivers, lakes, and swamps -- and barely even there.

I find myself completely unsympathetic with both extremes of the debate. On the one side, there are people who say they would never cut down a tree just for convenience. On the other, those who say that it's my property, and no tree hugger is going to stop me from doing what I want with it.

I do think that trees demand respect — as does every living thing and even, to some extent, everything inanimate. If you brutalize the world around you, you also brutalize yourself. But I don't view trees as sacred — not as a general rule, anyway. In some ways, that seems just as irresponsible. It's copping out, failing to engage with the concrete reality of individual trees. Cutting down the tree at left in this photo is unthinkable, although it blocks the northern sky almost to the zenith.

Mind you, certainly trees are indeed sacred, though it's we who make them so. At my preferred observing site at my country home, the entire northern sky is blocked by a huge sugar maple that was probably planted when the house was built. But cutting it is completely unthinkable. My grandparents preserved it when they bought the house in 1930, and it's my duty to preserve it for my grandchildren — when and if they are born. It goes beyond my own personal likes and dislikes – even beyond my extended family. It's a link to the boys who lived in that same house and loved that same tree before they went off to fight and die in the Civil War.

On the other hand, I'm perfectly willing to cut down the trees at far end of the field that block my view directly to the south, where it matters most. Those trees are barely older than I am; when my father was a child, those woods were sheep pasture as far as you could see. If I don't cut trees down, then the field will slowly, inexorably, grow in from the edges, and there will be no field at all for my grandchildren.

Mind you, even those trees I'm not about to simply slaughter. I won't cut them faster than I can burn them in our fireplace. At the current rate of progress, I figure it will take me a decade or more to get an extra 15 degrees of unblocked horizon. But that's OK. It's foolish to be in a hurry when you're dealing with organisms whose life spans are measured in centuries.

It's sobering to think that the beavers who recently moved into the swamp below our house have killed more trees in three years than I have in my whole life. Then again, it's a full-time occupation for them, and just a hobby for me.

When I was growing up, the block of land on which I now live was market gardens. There are now five trees on my property and six on the neighbour's which block the western sky.
At the time we moved in - 16 years ago - I wanted to cut down one 2 metre high self seeded one and prune the rest, and was told not to. That tree is now 20 metres high and wide, and probably undermining three swimming pools.

i got "lucky" in 2004 . we live on the edge of the ocala national forest in florida and that year hurricanes francis and jeanne did more tree clearing than i would have ever under taken . i just had to clean up the mess.now i haveonly to discourage voluteer growth.
dennis

I'm with you 100%. The extreme positions on both sides are irrational. But it seems like that's become the style that everyone uses for every argument. It's really great to hear someone with a rational position on this - - or on any dispute, scientific, political, or whatever....

Thanks for a breath of fresh air!

When my wife and I started looking for a place to retire 5+ years ago, the wive of the night sky was a major consideration.

We looked at several (50+) properties in several states. We settled in an area that has lots of trees. However, they are very slow growing Pinon trees. The also have a low growing habit, so it is the best of both worlds.

They block the local light from neighbors but offer a great view of the sky 10+ degrees above the horizon. For us, it worked out just fine.

Living in a very dry part of the U.S. I have great respect for the very slow growing trees of this region and always ask myself, many times, before cutting........ is this really necessary?

There are a couple of them that will begin to block my view in the future. I will, at that time, trim back the upper part of the growth so that I can still see what I want to see.

The column raisied some very erxcellent points. I was raised in a forest. When people would come to my house, they wondered how in the world I became interested in astronomy, and my amateur astronomer friends wondered how I pursued my hobby. The answer is simple: I lugged my telescopes from place to place on our property, to get unobstructed views. I understand that that is easier for a 17-year old than a 57-year old, but it's what I did. Now that I own a smaller plot of land, and the growing trees are becoming a problem, I'll probably start lugging again.

Interestingly there is a debate in New York about keeping some open areas cleared to preserve the open-fields-loving birds that moved in during the late 19th century. As many of the family farms cleared a hundred years or more ago have been abandoned and are rapidly returning to woodlands, the open field loving bird population is dropping swiftly.

I recently asked the site manager at Stellafane to remove my two least favorite trees and he agreed to put it on his to-do list. These two have sprouted up over the years, right in the middle of one of the observing fields. The Northeast is essentially an endless forest with many of the abandoned 19th century farms rapidly going back to forest. Cutting a few trees is immaterial. Thousands fall because of everything from ice storms, disease, and hurricanes. Clear cutting for development is the problem, not removing a few trees.

Wise thoughts about a complex issue. I agree that trees and all other living beings deserve respect, and life should never be taken heedlessly. I think your decision to cut unwanted trees at the rate you can use them for firewood is a sound compromise.

I grew up in New England (Ct) and I had to cut a few trees down also. There was nothing I could do about the north view but I had placed my observatory near some tree's to take advantage of their light blockage since I couldn't view the north anyhow. I agree with the writer that if it's your land, you should be able to do what you want. Part of our right to own land. These tree's also helped block the cold north wind of the winter and it gave me many enjoyable nights watching Orion climb to the south.

I'm somewhat of a tree hugger myself so cutting trees purely for sky-view isn't an option. I'd rather haul the telescope. I remember, though, one day I was looking at the trees around the house wishing I had a better view. A month later, Hurricane Katrina came and granted that wish. I miss my trees but the view is nice and the wood is still keeping me warm in winter.

Where does this wacky idea come from that trees need "respect"? Liberal environmentalist earth worship????

Instead of cutting the trees down, just dig them out and move them someplace else. It may be expensive, but it solves both ends of the equation. In Tony Flanders case with the 160+ year old tree, that's understandable.

Trees, can't live without them, after all they are the biggest processor of carbon dioxide; and you often can't observe with them. I live in northern Minnesota wher the trees are plentiful and the horizon isn't. I have often thought of removing a few blocking my view; however all of them old growth and thereby safe from my chainsaw. The thought has crossed my mind of pruning them back a little but until the rest of the area grows over, they are safe from even the pruning saw. I do empathize with those that have removed trees blocking their view. For those nay-sayers I offer this, in order for new trees to grow old trees must be removed to allow sunlight into the forest. Moderation is always the key in any environmental argument.

Larry, a person doesn't have to be a "liberal environmentalist earth worshipper" to respect the role played by trees, whether this is providing shade to a south-facing house, somewhere for youngsters to climb and play, for birds to live, to provide fruit and take in carbon dioxide and other chemicals from the atmosphere, to provide shelter from cold winds or simply in providing firewood to keep one's home comfortably warm, a reminder of bygone days, an "aide memoire" for grandparents and others who have long since left.
The Easter Islanders had little respect for their trees and got rid of them all and found themselves on a barren island in a vast ocean and unable to feed themselves. Let's not take their extreme path and go that way!
I think Tony has struck a very sensible, sound and realistic "happy medium" and can look forward to his grandchildren playing under a tree that his grandparents knew years ago.