On Moday, August 27th, I set my alarm for 4:40 so that I could wake up in time to view the next morning's lunar eclipse. Alan MacRobert's article in the August S&T hinted that for New Englanders, the Moon might become invisible toward the end of the partial phase, and I was eager to prove him wrong. With the Moon still 2° above the horizon at the beginning of totality, I figured I had a fighting chance. To handicap myself a little, I didn't bring a telescope — just binoculars.

As soon as I arrived at the top of the hill in Danehy Park, I realized that the Moon was bound to disappear before totality. Most of the sky was quite clear, but there was an impenetrable cloud band on the western horizon. But having come that far, I decided to enjoy the partial phase to the fullest. 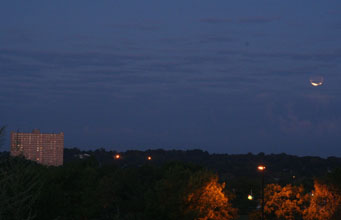 This was actually a rather novel experience for me. Usually I think of partial phase as a mere prelude to totality, and don't pay it much attention. Fortunately, the partial eclipse was particularly good this time. Even with just ¼ of the disk covered, I could see the dark part of the Moon with my unaided eyes. As the dark bite grew larger, it also became strikingly asymmetric. Its right-hand edge was much brighter than the left. You can just barely see this effect in my photo at right, and it's much more obvious in Dale Ireland's photo of the onset of totality in our Photo Gallery.

My one mistake was not bringing a telescope. I should never neglect to do that when viewing a popular event from a public venue! Sure, observing the Moon through a scope is old hat to me, but it would have been very gratifying for the dozen other people who had gathered there. Fortunately, my 10× image-stabilized binoculars easily showed the crescent phase of Venus, which was rising as the Moon disappeared into the clouds. So at least I had something exotic and unexpected to show to everyone else.

Here in Hawaii the moon was ideally placed, but unfortunately where I was clouds got in the way. I saw the beginning of the eclipse but right after that viewing was completely obscured. Occasionally with binoculars I could see the shadowed moon through thin spots in the clouds. Luckily during totality there was a hole in the clouds so I got a clear view of the red moon. The extreme lower right of the moon did appear to remain brightly lit.