I'm a little bemused by all the reports that Comet Holmes is getting harder to see. No doubt that's true, but I can't tell by firsthand experience, because each time I've viewed the comet, the conditions have been radically different from the previous time. (Remember, I was traveling in India when the comet first flared up.) But I've found it easily every time I've looked, and it's always appeared both bigger and brighter than I expected.

Most of my sightings have been through my 10×30 image-stabilized binoculars, which seem to be nearly ideal for this particular job. All along, I've found Comet Holmes a little hard to snag without optical aid because it's in such a crowded star field. And because of the comet's immense size and modest surface brightness, I find it much more prominent through binoculars than through a telescope. 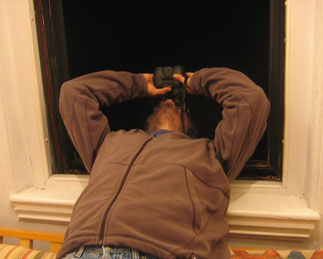 My favorite way to view objects high in the sky using binoculars from my city apartment is to do a backbend over the windowsill. But it takes a while to get used to seeing objects "upside-down" — and to resist the illusion that I'm about the slither headfirst and backward through the window.

My most recent sighting was on Sunday night, around 3h UT on Nov. 19, from my apartment in Cambridge, MA. The comet was immediately visible through my 10×30 binoculars, a bit bigger than 30', with Alpha Persei (Mirfak) right on its edge. A brighter elliptical blob about 10'×20' extended from the center of the coma to the edge.

This was despite the urban skyglow (brighter than mag 18.0 per square arcsecond) and the first-quarter Moon. I'd rate the overall visibility roughly equal to the Andromeda Galaxy, and much higher than any other galaxy. Vastly brighter than M33, for example!

My urban skies are only about 50% brighter at full Moon than without a Moon, so I'm predicting that I'll be able to see the comet with my binoculars right through the full Moon period. And after that, it should start to get more prominent again — at least when viewed from dark sites. I can't wait to see how big the coma has grown by the end of the year!

Comet 17P/Holmes was readily visible through my 8x42 Celestron binocular and 80mm f/5 Orion ShortTube 80 at 15 and 36x one night before the Full Moon.

Despite last night's Full Moon and some high cirrus clouds, I had no trouble making out Comet 17P/Holmes through my 15x70 Burgess Optical binocular last night.